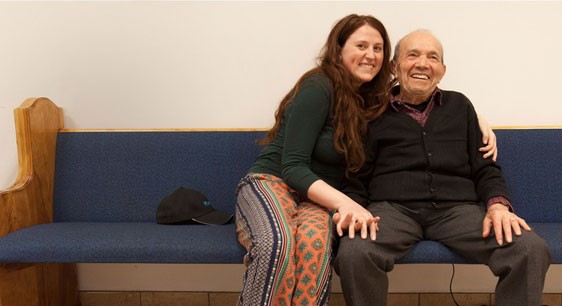 By now, I hope you have heard about an upcoming effort to mobilize the community in support of San Diego’s remaining Holocaust Survivors. If not, you can read Brian Tauber's column from last week.  This blog post doesn’t substantively add more to that announcement, but talk of Holocaust Survivors has me reflecting on two life experiences. While personal in nature, these experiences and events relate closely to the conversation of honoring Holocaust Survivors as well as to how my own journey to the Federation twisted and turned at a pivotal moment in my career.

First, you should know my middle name is Lieb. It’s not based on the Hebrew word for heart, or “Lev,” but is a name to honor the life of a once obscure former Catholic Priest. My parents came to know Reverend Marc J. Liebler in the 1960s after he courageously spoke out about the silence and complicity of the Catholic Church during the Holocaust. As a result of his ‘chutzpa,’ he was subsequently defrocked and ostracized from the Priesthood.

My parents learned of his story as college students. As active Hillel leaders in upstate New York, they invited him to their campus to speak to students and other members of the community. My parents were so taken, inspired, and moved by his courage that when I was born, they named my middle name after his last, determined to remember him after he lost his battle with cancer years later. At 13 years old, I would meet and dance with his widow and son at my Bar Mitzvah. As an adult, I have come to deeply appreciate the privilege of honoring this man who said what was so very unpopular at the time. He was not scared to speak – and speak he did. I have always felt a great deal of responsibility in carrying his name as part of my own.

The second story has to do with my graduate training to be a Jewish communal professional. As a first-year social work student at the University of Southern California, I was assigned as a case management intern for Jewish Family Service in West Hollywood. Part of my responsibilities included supporting low income older adults with accessing vital social services and support to ensure they could remain in their homes for as long as possible, and that they would feel part of the community. During that year, I also had the opportunity to lead a few bereavement groups as well as counsel a number of clients. One of those clients was an older couple, two Holocaust Survivors in their early 80s.

Up until that point, I was not yet sure where my career was headed. I was passionate about Jewish communal life, but equally as passionate about supporting vulnerable populations. That JFS internship was designed to provide real life experience as a therapist/counselor. What I experienced would forever change my professional identity.

Each week, I visited this loving and sweet couple, but spent most of the time with the husband. During those 60-minute sessions, he would talk to me about his struggles caring for his ailing wife, who was developing significant symptoms of dementia and Alzheimer’s Disease. Under the most typical of circumstances, Alzheimer’s is a devastating illness that wreaks havoc on caregivers, loved ones, and, of course, is the very definition of terror and fear for those who suffer from the disease itself. During hours of conversation, it dawned on me that this poor woman, who had already suffered and survived the unimaginable trauma of the Holocaust, was now faced with a new, devastating reality. Try to imagine this: each day, she woke up thinking that she was still trying to escape the Nazis. This was her waking memory, every morning. And so, her husband sobbed and held my hand and said he did not know how to save her from the torment.

I did the very best I could to provide support. I helped them access services and financial. I was a shoulder to lean on and to cry on. But at the end of each session, I did my own sobbing to my supervisor, asking her, “How can you do this work? I can’t do it anymore.”

What was painfully clear to me at the time was that I could never be a clinical social worker. I simultaneously developed a respect and admiration for clinicians and social service organizations and determined that I would dedicate my career to raising money and organizing so that professionals and organizations like these could do their work. In many ways, I think I chose the easy path!

I have thought a lot about these two stories leading up to our announcement about an upcoming effort to mobilize the community to care for San Diego’s remaining Holocaust survivors. As we plan to roll out this effort, I am reminded that caring for Survivors is not the responsibility of any one individual or organization. And yet, I believe that if asked, we all want to stand with and support those who faced the atrocities of the Holocaust. As I discuss this effort around town, I’m invigorated by the many organizations that have already said, “I’m in.  I want to be part of this effort.”

While the Holocaust Survivor Coalition will be coordinated by Jewish Federation, Jewish Family Service, and the Jewish Community Foundation, we are beyond pleased that organizations like the JCC, The Butterfly Project, the ADL, Hillel, the San Diego Rabbinic Association, San Diego Jewish Academy, Seacrest and others have already agreed to be part of this effort. I expect many other organizations will get involved in the coming months. I’m especially proud that our own Federation will help to lead this effort in the coming months and years to ensure that this special part of our community live out their days not only in dignity, but in the embrace of the entire community.

Please email us at SurvivorsNow@jewishfederationsandiego.org if you would like to be informed as this important project unfolds.