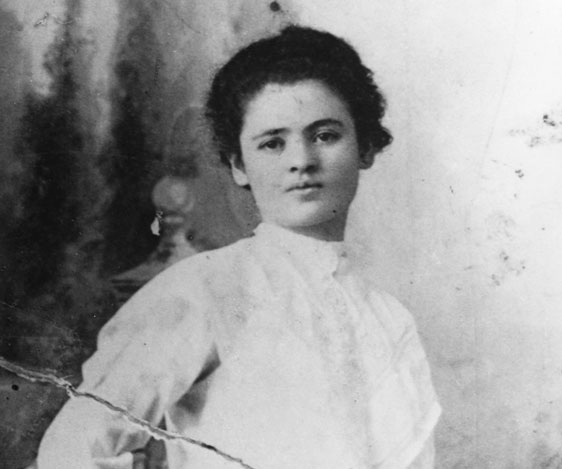 Portrait of Clara Lemlich, circa 1910. Part of the International Ladies Garment Workers Union Photographs (1885-1985) collection located at The Kheel Center for Labor-Management Documentation and Archives in the ILR School at Cornell University.

On November 22, 1909, at a massive workers meeting held at Cooper Union, Clara Lemlich Shavelson made herself known. In Yiddish, she declared, “I am tired of listening to speakers who talk in general terms… I move that we go on a general strike!”

Her words prompted some 20,000 to 30,000 garment workers — most of them Jewish women — to go on strike. This would be known as the Uprising of the 20,000, which was a “milestone action in a swelling labor movement that made workplaces safer, workdays shorter and wages higher.” A 52-hour work week was adopted — and yes, that was considered a win — and the International Ladies’ Garment Workers’ Union (ILGWU) was recognized.

Clara, a Jewish mom, was a “crusading leader of labor rights” who fought tirelessly for the rights of working-class women. And she’s finally getting the recognition she deserves — The New York Times published her obituary as part of its “Overlooked” project.

In March 2018, The Times started writing obituaries for incredible people who were overlooked by the paper at the time of their deaths. The tagline of the project is: “Since 1851, obituaries in The New York Times have been dominated by white men. With Overlooked, we’re adding the stories of remarkable people whose deaths went unreported in The Times.”

And it has highlighted many remarkable women since it launched. (Can you believe the NYT didn’t cover Ida B. Wells‘ death? Or Marsha P. Johnson? Or SO many others!?)

Taking a page out of the New York Times, here’s a look back on Clara’s remarkable life.

In 1886, Clara was born into a religious, Yiddish-speaking Jewish family Gorodok, Ukraine. According to Annelise Orleck in the Jewish Women’s Archive, “Like most girls, she was taught Yiddish but was offered no further Jewish schooling. Her parents were willing to send her to public school, but found that Gorodok’s only school excluded Jews. Angered by the Russian government’s antisemitism, her parents forbade her to speak Russian or to bring Russian books into their home. The headstrong child continued her study of Russian secretly, teaching Russian folk songs to older Jewish girls in exchange for their volumes of Tolstoy, Gorky, and Turgenev.”

By the 1903 Kishniev pogrom — the massacre of 49 Jewish people in Kishniev, and the rape of many more — the Lemlichs were ready to leave the Ukraine for the United States.

Like so many Jewish immigrants, they settled on the Lower East Side, and 16-year-old Clara started working in a garment shop. According to her “Overlooked” obit, she “dedicated herself early on to helping working women,” and organized with the ILGWU.

In 1913, she married Joe Shavelson, and moved to Brownsville, Brooklyn, and had three children. She became an advocate for suffrage, and according to “Overlooked,” “She pursued a vision of motherhood that was almost unheard-of at the time, bringing her children with her to Socialist meetings as soon as they were old enough to walk and organizing rent strikes that got her family evicted from at least one home.”

In 1929, along with another activist, Clara created the United Council of Working-Class Women (later known as the Progressive Women’s Councils), which led “rent strikes; anti-eviction demonstrations; meat, bread, and milk boycotts; sit-ins and marches on Washington.”

Clara’s housewives councils, writes Orleck in JWA, “paved the way for the modern consumer and tenant movements and brought gender politics into the working-class home, shining a bright light on hidden power relations between husbands and wives, parents and children — long before the feminists of the 1960s and 1970s popularized the thesis that the personal is political.” She laid the groundwork for the rise of second-wave feminism.

In 1951, her husband passed away, and in 1960, she remarried — this time to a labor movement activist, Abe Goldman. He passed away seven years later. At age 81, Clara moved into the Jewish Home for the Aged in Los Angeles. There, she organized the nurses and orderlies into a union (obviously). She said, “How much worse could these conditions get? You’d be crazy not to join a union.”