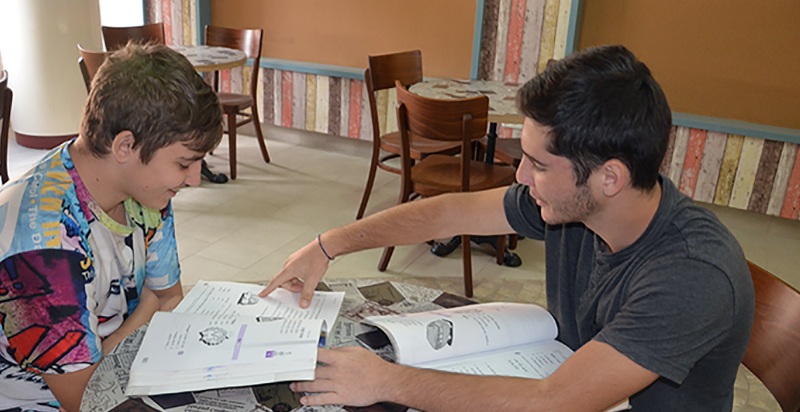 Israel has taken another step towards its goal of increasing the number of high school students graduating with top level maths and science thanks to a new mentoring programme run by World ORT Kadima Mada in partnership with Google, the Prime Minister’s Office and the Ministry of Education.

The meet@5 programme is a turning point in the revolution underway in the field of STEM education, Education Minister Naftali Bennett said at the launch.

“For me, the project is a dream come true,” said Mr Bennett.

The number of high school students graduating with top level, “5-unit”, maths decreased by 30 per cent between 2006 and 2012 resulting in what Mr Bennett has described as a strategic threat to the country.

Under the new programme outstanding Year 10 and 11 maths students will be trained as tutors to help middle school students with their maths studies as part of their community service obligations. Being helped by people close to their own age is expected to inspire and motivate the younger students to seek success in the sciences and, in particular, maths.

“This is education at its best – to excel in order to give to others so that they may also excel,” Mr Bennett said. “This is a wonderful project that I am certain will open the doors of excellence in maths to many more students.”

Meet@5 is a joint initiative of the Prime Minister’s Office and Education Ministry in partnership with Google. World ORT Kadima Mada will roll out the project to 125 schools across the country.

World ORT Kadima Mada National Director Avi Ganon said: “Meet@5 is a further opportunity to encourage and guide more youth to choose the science and technology world, which is key to economic independence and equality of opportunity in Israel. This programme is an additional leverage to help expand Israel’s scientific-technological reserve and will help to reduce gaps between the periphery and the centre.”

Maths is seen as the language of science and technology – more than 90 per cent of graduates from Israel’s engineering faculties have 5-unit maths. But the country’s education system has not been able to produce the number of engineers needed by the country’s high-tech sector – 7,000 this year, a figure which is expected to grow by six per cent over the next 12 months.

The Ministry of Education’s Head of Druze and Circassian Education, Mohana Fares, is in charge of its National Programme for Excellence in Maths and Science. He said: “The more students who take five study units in maths, physics and chemistry, the better it is for Israel’s economy, for academia, for the defence industry, and for society as a whole.”

In addition, research by the Taube Centre for Social Policy Studies shows that students who choose five units of maths instead of four at Bagrut can increase their wages by 10 per cent; and a student opting for five units is more likely to have the option of studying the most in-demand disciplines like engineering and computer science at university.