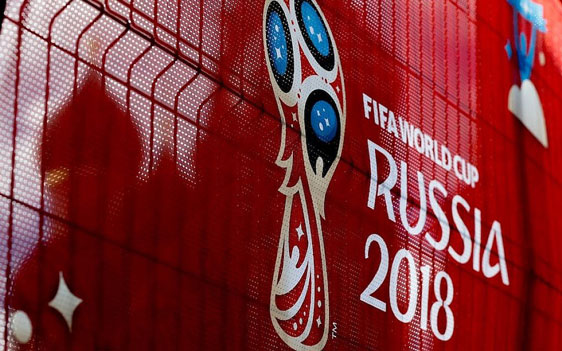 JTA – Although soccer’s popularity seems to be on the rise in the US, this year’s edition of the World Cup might be somewhat of a downer for American Jews who enjoy watching the sport.
The US men’s team failed to qualify for the quadrennial tournament for the first time since 1986, and there are practically no Jews involved in the games this time around.
Still, there are plenty of Jewish storylines surrounding the international event, which is being held in Russia and starts on Thursday [June 14th]. Read on to catch up […].

Colombia has a Jewish coach

Jose Pekerman is the 68-year-old Argentine coach of the Colombian team, which has seen its level of play surge over the past decade.
The grandson of Ukrainian immigrants, Pekerman started his soccer career as a kid at the local Maccabi Jewish youth club in Entre Rios, a province north of Buenos Aires. At one point, he lived in Villa Crespo, a Jewish neighborhood of Buenos Aires.
He played professional soccer for seven years, but his career as a coach has been much more notable. From 2004 to 2006, he guided the Argentina squad, a perennial powerhouse. (He was the coach who called up a young Lionel Messi to his first World Cup.) Pekerman resigned following Argentina’s loss in the 2006 World Cup quarterfinals, but six years later he was tapped to lead the Colombians. Before the 2014 World Cup, Colombia had not qualified for the tournament since 1998, but reached the quarterfinals under its new coach. Pekerman, who received Colombian citizenship after the team qualified in 2014, said helping Colombia return to the World Cup was “one of the greatest joys in [his] life.”

The announcer who made “¡GOOOOOOOAL!” famous is Jewish

While Andrés Cantor, an Argentine Jew who grew up in America, didn’t invent the ridiculously long call for a score, he certainly popularized it. This World Cup will be Cantor’s ninth as a commentator, and he will serve as the lead announcer for the Spanish-speaking Telemundo network. Cantor’s Romanian and Polish grandparents fled Europe during World War II. At this World Cup, Cantor will be joined by his 24-year-old son Nico, also a sportscaster and sports journalist. Nico told The Washington Post …: “I try to find my own voice. I have been working my own things.”

Israel didn’t qualify, but you can still root for two Israel-based players.

Like the last World Cup, and for that matter every World Cup besides the one in 1970, Israel did not qualify this year. At the 1970 competition in Mexico, Israel qualified as an Asian team, but shortly after it was expelled from the Asian Football Confederation due to political pressure from its Arab neighbors. Since then, Israel has had to compete and qualify in the European division – a much harder task. So while there are no Israeli players in the World Cup, two who play for clubs in Israel will be competing. John Ogu, a midfielder for Hapoel Beersheva, is on the Nigerian team, and Predrag Rajkovic, a goalkeeper for Maccabi Tel Aviv, plays for Serbia. So maybe rooting for Nigeria or Serbia could feel a little bit like cheering on Israel.

Juan Pablo Sorín, now 42, was a famous player for Argentina who was the captain of his country’s World Cup team in 2006, when Pékerman was head coach. He played for some of Europe’s best club teams, including Barcelona, Juventus, Paris Saint-Germain and Villarreal, before retiring in 2009. He started working as a pundit in 2012 and will contribute commentary for Telemundo this year.

A nonprofit called Kulna Yerushalayim will host a shootout at the Jaffa Gate, one of the seven entrances to the Old City of Jerusalem, where young Jewish and Arab residents of Jerusalem will try to score on a goalkeeper.
The organizer, Dror Amedi, hopes that a prominent goalie (Gianluigi Buffon, Oliver Kahn, Fabien Barthez, Iker Casillas or Peter Schmeichel) will participate in the event.
Amedi explained to The Times of Israel, “Our goal is to take an event that unites the world and has become a symbol of fraternity between nations, the soccer World Cup, and use it to create bonds between Jewish and Arab youth in Israel.” During the shootout, the World Cup will be broadcast on the walls of the Old City.

The app, called “soccer-hay,” will have a guide to synagogues, local rabbis and where to find kosher food. It is available for iOS and Android.
Additionally, according to Chabad.org, the Jewish Community Center of Moscow will host a multilingual information desk daily. It’s hard to estimate how many Jewish tourists will attend the tournament, but the International Sports Travel Agencies Association says that 10,000 Israelis will make the trip.

Could Israel show the World Cup on TV for free in the Arab world?

Israel’s Foreign Ministry announced in March that the country’s national broadcaster plans to show the tournament in Arabic to its neighbors for free. The move would help fans in countries such as Egypt, which qualified for the World Cup but did not purchase rights to air the games. Qatar’s monopoly over the tournament’s Arabic language rights has made watching the tournament in Arabic expensive for fans across countries. However, FIFA, the international soccer body, shot down Israel’s idea, according to a statement reported on by The Jerusalem Post. “The Israel Broadcasting Corporation … is not authorized to broadcast any 2018 FIFA World Cup content (including any match coverage) outside of Israel. [Qatar’s] beINSPORT[sic] is the exclusive Media Rights Licensee for the Middle East and Northern Africa region,” the statement read. Israel has not commented on the drama since March.

By Emily Burack, Times of Israel