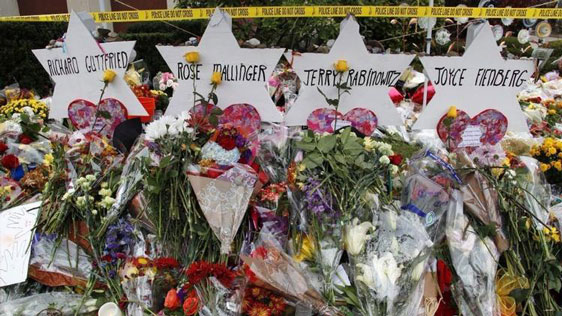 Flowers are piled around Stars of David Thursday at a makeshift memorial outside the Tree of Life Synagogue to the 11 people killed Oct 27, 2018 while worshipping in the Squirrel Hill neighborhood of Pittsburgh. (Associated Press photo/Gene J. Puskar)

The following Commentary by Jewish Federation Board Chair appeared in the San Diego Union-Tribune on Thursday, November 1, 2018.

We lost family last Saturday. As Jews, we call them brothers and sisters, although most of us never met any of the 11 innocent people gunned down just for being Jewish. I saw newscasters’ eyes well with tears describing the senseless horror that occurred during a Shabbat morning in a house of worship. I listened to a commentator poignantly describe how, in a violent world, this tragedy was different — different because after thousands of years of persecution, exile and murder, Jews were supposed to be safe in America.

The undeniable strength of the United States is its diversity. Our varying experiences converge into a common heritage built on being strangers in a new land, immigrants with a new lease on life, people who found belonging in the strength of our differences. Yet, there are those who don’t believe in the multicultural fabric that makes America the beacon of democracy and freedom envied the world over, despite our imperfections and historical missteps. The scourge of anti-Semitism, couched in terms stolen from generations past, reared its ugly head again in the most egregious and devastating manner. Jews were killed — for being Jews. We are less than one-tenth of 1 percent of the world population with an undeniable record of contributions to the betterment of humanity, yet there are those who still find justification in the cold-blooded murder of Jews, for being Jews.

America is beset by a climate of division, incivility and vitriolic rhetoric. On this, we can all agree. Whether the killing of two African-Americans in Kentucky, because they were black, or the tragedy at Pittsburgh’s Tree of Life synagogue, the predictable result of these crescendos of hatred is violence spawned from the seeds of ignorance and bigotry. When will we recognize that words have meaning, that they are a call to action?

When I say we lost family, I mean every one of us. Jews do not have a monopoly on victimization. We are often the canary in the coal mine that gets ignored until it is too late, but we are not alone. Woman. Black. Latino. LGBTQ. Muslim. Japanese. Sikh. The list of targets goes on. As Jews, our history of confronting discrimination and fighting for survival stretch millennia, but the same ugly soil of bigotry is the ground from which it grows for all of us.

For those who exploit the death of 11 souls to make a point, let us not forget that they were family. They had parents, sons, daughters, brothers and sisters. There are people suffering from unspeakable pain, wondering how such evil can occur. For them, our hearts bleed. There is also the Pittsburgh Jewish community family. The attack in their backyard demands our unqualified sympathy and support. As does the larger Jewish community. We vow “never again” and then witness yet another malevolent attack on our family — on all Jews. We fear that we are not as safe as Americans as we felt last Friday.

A central tenet of Judaism is “Tikkun Olam,” repair the world. It is not charity and it is not about Jews. It is about making our world a better place for our family. This principle that guides many Jews is why Israel offers assistance to Iran after earthquakes or why Israeli rescue teams are the first on the scene of a disaster anywhere in the world.

Yes, our family is complicated. We are white, black, Asian, gay, Latino, Christian, Muslim, Buddhist, conservative, liberal … we are all family. We all lost a bit of our souls with the death of our Jewish family members. But we will endure. We always do. The optimism that is at the foundation of America’s greatness and in our human spirit will prevail. This excruciating loss will unite us, once again, to defeat the forces that seek to annihilate us. I’ve seen it before in all forms and from all segments of society.

We all lost family last Saturday. Let us honor them by fighting that which seeks to divide us and prove that our love for our family is too strong to be destroyed.