The following remembrance about the 11 murders at the Tree of Life synagogue in Pittsburgh was sent from Jewish Agency for Israel (JAFI) Chair Isaac Herzog on November 5, 2018.

I spent this past Shabbat in Pittsburgh as an expression of solidarity from Jews around the world. We grieve as one people. It's especially at times like these that we must come together. By doing so, we remind each other that no Jewish person is alone. That there is hope for a better tomorrow.

The support that I witnessed in Pittsburgh, from every public space, was deeply moving. In the airport, on the front page of the local newspaper, in the memorial in front of the Tree of Life synagogue, everyone, Jews and non-Jews alike, have come together to share the message that Pittsburgh—and the world—has no place for hate. 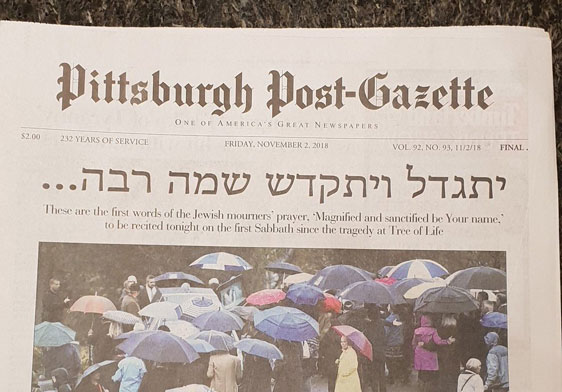 The front page of the local newspaper in Pittsburgh featured the first words of the Jewish Mourner's prayer: "Magnified and sanctified be your name." Photo: The Jewish Agency for Israel

On Friday, I attended the funeral of Rose Mallinger, who at 97 was the oldest of the victims. I also visited the Tree of Life synagogue, where the attack took place. I lit a memorial candle together with Tom Wolf, the governor of Pennsylvania, and spoke with members of the community about the tragedy.

I was grateful to be able to join prayers with congregants from the Tree of Life synagogue on this first Shabbat following the attack. When I addressed a joint synagogue service, I told the huge crowd that the true answer to a gunman shouting “kill all Jews” is the loud “Shma Israel”—"Hear O Israel" that we recited together at the service, and the words of Psalm 29, "G-d will give His people strength and bless His people with peace."

I also witnessed incredible inter-faith solidarity. I met Wasi Mohamed, executive director of the Pittsburgh Islamic Center, which raised $70,000 for the families of the victims of the attack at the synagogue. "'We just want to know what you need" he said to the Jewish community.

A memorial was set up outside the Tree of Life synagogue. Photo: The Jewish Agency for Israel

I'm proud of the work The Jewish Agency for Israel has done in Pittsburgh in response to this shameless act of hate. We were able to partner with Israel's Ministry of Foreign Affairs to help send a team of post-trauma and grief specialists from the Israel Trauma Coalition to Pittsburgh. We have been providing our Shlichim (Israeli Emissaries) with extra guidance and support so they can best serve the community during this difficult time, and they have been doing exceptional and essential work. Additionally, Pittsburgh’s longtime Partnership2Gether region, Karmiel-Misgav, has already made plans to build a permanent monument in the town.

As I said in my speech at the General Assembly of The Jewish Federations of North America less than two weeks ago: We were, we are, and we shall always be reliant on one another. Our alliance is important in times of celebration; it is vital in times of grief. We will come out of this stronger, together. Hate will not win.

Isaac Herzog
Chairman of the Executive
The Jewish Agency for Israel