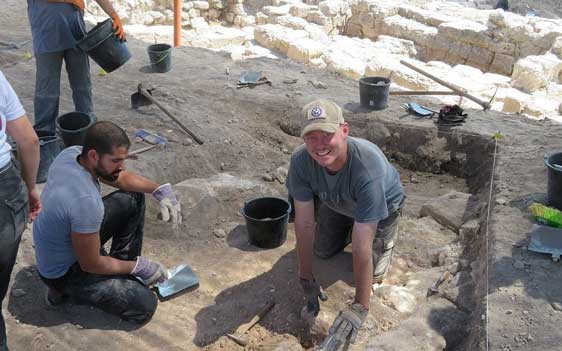 Seven United States military veterans recently completed an unusual tour of duty — at Israel’s Beth She’arim archaeological excavation. The group participated in one of a growing number of international programs which send former servicemen back into the field — with shovels, not swords.

By digging into the dirt, the veterans — most of whom suffer from Post-Traumatic Stress Disorder — hope to find peace of mind, connect to the roots of their trauma, and be part of a cohesive team reminiscent of their former military units.

For the group of US vets in Beth She’arim, coming to Israel offered an added therapeutic element: returning to the Middle East, the source of their trauma, and working alongside a diverse team of Israeli Arabs and Jews, mostly military vets themselves.

During their two-week stint of physically digging into the past, the US veterans’ stereotypes about Israel and the Middle East also crumbled, according to founder of the American Veterans Archaeological Recovery (AVAR) Stephen Humphreys.

“The team was excavating alongside Israelis from all walks of life — Jews who had served in the military, Muslims. They saw how multicultural the people are, but also how kind,” said Humphreys in a phone conversation this week.

Israelis are known for candid speech peppered with no-holds-barred opinions. That, said Humphreys was very comfortable to the vets, who were accustomed to a similarly straight-forward culture from the military.

Being in Israel, he said, was “a little eye-opening” for the seven former servicemen. “As American vets, we tend to segregate ourselves and think no one else understands. But then we come to a society where everyone does understand, and being a vet is not that big of a deal.”

In coming to Israel, the US vets were met with a proliferation of soldiers on the streets and a culture that embraces its military as family. With the mandatory conscription of most Israeli men and women, servicemen are not the “other,” but the “us.”

This widespread service, said Humphreys could help veterans conceptualize their own post-military transition. “For the Israelis, this [IDF service] is something I did, and now I’m doing something different,” he said.

After he demobbed, the former history major decided to attend a Christian seminary with the intention of reenlisting as a chaplain and taking care of his men in a different role. Early into his studies at Southwestern Baptist Theological Seminary in Texas, he and his wife signed up for a summer excavation at Tel Gezer.

“As soon as I touched the dirt, I fell in love,” said Humphreys. He switched degrees to archaeology and is now only a few months shy of finishing his PhD in archaeology at England’s Durham University.

The idea of former military personnel as excavators was introduced to Humphreys when he moved to the UK. There, a program called Operation Nightingale began in 2011 for veterans who had returned from Afghanistan who were grappling with PTSD and other isolating issues.

Humphreys started working with the British program in 2015 and felt that he could transplant, and potentially improve upon, the idea for US vets. Founding AVAR in 2016, said Humphreys, was his way “to take care of the troops.”

For the first two years, Humphreys and his partners coordinated small US-based programs to beta-test the benefits of the digs for veterans. A grant from the National Geographic Society spring-boarded the group into the national spotlight. In total, some 75 veterans have taken part, 55 of them from this year alone, he said. It was time for the leap to an international dig.

After excavating in Israel for a decade, Humphreys connected with Haifa University’s Dr. Adi Erlich and her Beit She’arim second in command, Rona Evyasaf, at an international archaeology conference.

Humphreys said he was impressed by the Beit She’arim team’s cohesive and supportive excavation program. “They cared about the workers and the community… They were taking care of the archaeology — and the people in the archaeology.”

He said he knew immediately that this was the excavation he wanted to pair with “to take care of my troops.”

The dig is based in the Beit She’arim National Park, a UNESCO World Heritage Site in the Galilee in northern Israel, with important remnants of a major Jewish town during the Roman and Byzantine eras. It is known in Jewish tradition as the hometown of community leader Rabbi Judah Hanasi, who died in 217 and is widely thought to have been buried at Beith She’arim. The excavation is under the auspices of the University of Haifa, which Humphreys said “bent over backwards” to facilitate their needs.

It is a community excavation, said archaeologist Erlich, and open to all — from children to the elderly. The only prerequisite is a desire to work, she said. The veterans team worked alongside the Israelis — washing dishes, pushing wheelbarrows — and some had therapy on the grass in the afternoon. What Erlich called, “a healthy normal.”

Sifting through the psyche
Psychologists and researchers are increasingly digging into the efficacy of archaeology as therapy. In a 2017 article in the peer-reviewed journal Current Anthropology, “Archaeology as Therapy: Connecting Belongings, Knowledge, Time, Place, and Well-Being,” a team of researchers wrote, “Archaeology has untapped potential to elicit and confirm connections among people, places, objects, knowledges, ancestries, ecosystems and world views. Such interconnections endow individuals and communities with identities, relationships and orientations that are foundational for health and well-being.”

In an August podcast for the popular UK-based Naked Scientists website, University of Oxford’s Associated Prof. of Experimental Psychology Jennifer Wild spoke about archaeology’s use in treating vets suffering from PTSD in connection to a recent dig excavating the Battle of Waterloo.

“Using archaeology as a novel form of treating PTSD is an exciting idea,” said Wild, adding that the best first-line of treatment is trauma-focused cognitive therapy.

In the US, returning to civilian life is a huge cultural shift from the military. The vets move from a sense of “brotherhood, fraternity, of taking care of each other, to a civilian world where no one cares — at least that’s their perception,” said Humphreys. Additionally, as in the case of the members of the AVAR group, many are battling physical and emotional injuries which further isolate them.

The idea behind a veterans’ archaeological dig in Israel, said Humphreys, was that this would be no mere vacation, rather a launch pad for an emotionally supportive unit that would carry forward into the future as they battle the all-too pervasive depression and even suicidal thoughts which haunt them.

“A month and year after the dig, we want them still to think, ‘I met Srgt. Annie Pinto, she took care of me in the field, I’m going to give her a call,'” he said.

It’s still too early to tell if this new kinship will last, but in an NBC news report on the Israeli dig, Iraq war veteran Joshua Sooklal said the project had renewed his personal sense of purpose.

“My job was to protect people, to basically serve them. After I lost that I felt I had no purpose in life,” he told NBC. “Reinstating that purpose is what came through with this program. Connecting with other veterans, showing that my purpose is still needed and wanted. It has also reinstated the motivation that I have to be a driven person.”

Facing down demons
The first group returned home after two weeks in Israel in August and plans are being made for a second, larger group to excavate at Beth She’arim next year — with their spouses.

Humphreys repeatedly emphasized he doesn’t want to exaggerate the benefits of the program. “It’s really easy in the states to hype vet programs… It is so important to manage expectations,” he said, because a negative experience could do so much more damage.

Being in the Middle East, he had feared, would bring such a negative experience. Humphreys said that he was initially concerned about the reactions of several of the veterans, who told him, “Oh, this is like where I was deployed to… It’s more like the places I deployed to than I thought it would be.”

Psychologist Wild, however, believes going back to the proverbial crime scene can be especially healing.

“One of the components of that treatment is actually going back to the site of the trauma where it happened. This is really important because often people have beliefs or feeling like the site of the trauma is frozen in time, and it hasn’t changed, and it’s completely dangerous and overwhelming and I won’t be able to cope if I go back,” said Wild.

“In terms of veterans, using archaeology to come to terms with PTSD as a way forward this is novel and potentially could be really helpful because it’s not exactly their trauma site, but there will be reminders of their trauma when they’re there,” said Wild.

For the US veterans, the Middle Eastern culture of Israel, and touring the Christian sites in Arab neighborhoods of Jerusalem and towns, such as Nazareth, was a same, but different echo of the Middle Eastern areas they had served in. Humphreys said, however, the vets were given a positive experience in Arab neighborhoods and forged relationships with Israelis from all backgrounds.

When working side by side with a diverse team at Beth She’arim, the vets, said Humphreys, were glad to “be in the trenches again.”

Archaeologist Erlich, who stressed she is not a psychologist, has drawn personal conclusions from her own time in the trenches.

“I see that excavation, the physical work, dirt, is very good for processing experiences. It’s a way to forget yourself in the past, and understand you’re a very small part in a larger cosmos,” said Erlich.