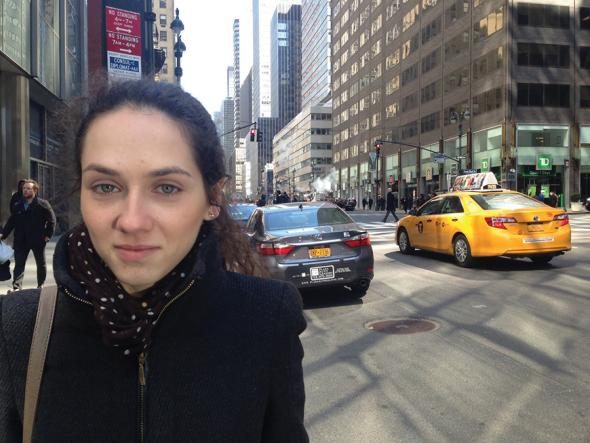 It was not the life that Masha Shumatskaya had imagined.

In February of 2014, she found herself in a dusty hallway ducking behind her mattress that she dragged into the hallway to protect herself from flying glass as exploding bombs threatened to shatter the windows to her house.

After weeks of fighting between the Ukrainian military and the Russian separatist fighters in Ukraine - Shumatskaya had had enough.

At the age of 23, she made one of the most difficult decisions of her life and joined thousands of Jews from her town that decided it was time to leave. She moved 200 miles away to a city named Kharkiv, located in central Ukraine to distance herself from the fighting that had torn her hometown apart.

Yet in Kharkiv Shumatskaya knew she would not sit around feeling sorry for herself and instead went back to what she knew best – helping her fellow Jew.

Shumatskaya worked for the American Jewish Joint Distribution Committee (JDC) in Donetsk since she was 17. The JDC had been helping Shumatskaya since she and her boyfriend had arrived in Kharkiv. She had never been on the receiving end of JDC’s work and she knew right away she had to give back.

“Thank G-d, I’m not in as bad condition as others,” said Shumatskaya in a recent interview. “I can work.”

She went to work at a JDC call center contacting Jews in the rebel-held city of Lugansk to provide food, medicine and heating oil to Jewish families who were affected by the ongoing violence.

Shumatskaya later decided she could help even more Ukrainians by bringing her story to the U.S. to illustrate the struggle of the thousands of displaced Jews who are struggling in Ukraine. As a community on the peripheral, some of the 300,000 Jews who remain in Ukraine are the most vulnerable populations of displaced persons - with more than one million displaced since the conflict broke out two years ago.

She said her first trip to the U.S. was “an honor to be an ambassador for all the Jews in need in Ukraine.”

Today, Shumatskaya continues to work to help Ukrainians in need. She even helped her own parents who were still stuck in a rebel-held city. Thanks to the JDC and the work of Shumatskaya and others like her, her parents, along with many other refugees were able to flee these dangerous war-torn cities and find new life in their home the country.

We are excited to welcome Masha Shumatskaya to San Diego on March 1, as part of our annual Lion of Judah Luncheon.

What a remarkable woman and community leader! We are so fortunate to have her as our partner and as someone who could advocate so effectively on behalf of the Ukranian Jewish community. So wonderful that Federation is bringing her to speak to our women leadership next month. Yshak Koach! Itamar