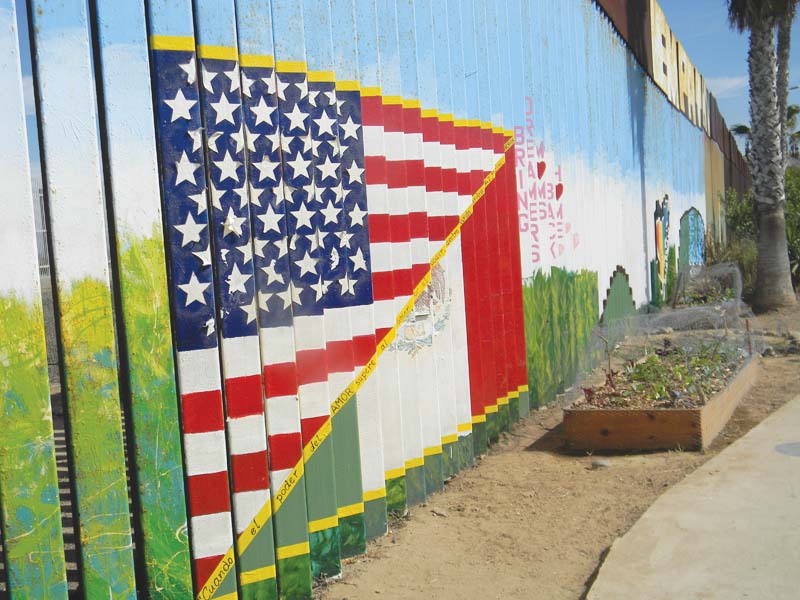 By Tina B. Eshel for The San Diego Jewish Journal

On a Tuesday morning in late October, I met up with a group of about 50 San Diegans at Liberty Station. We were about to embark on a day-long tour, organized by the U.S.-Mexico Border Philanthropy Partnership, the Latino-Jewish Coalition of San Diego (LJC), and the Jewish Federation of San Diego County. I was invited by Federation to join the group and explore the region and meet some of the people who are directly benefiting from involvement with the Mexican-American Jewish community based here in San Diego.

We were a mixed crowd of newbies to Tijuana and those actively involved in the Latino and Jewish communities, such as our guide, Andy Carey, the executive director of the Border Partnership, who was contracted to organize the day’s trip. Carey is a great story teller and a walking encyclopedia of cross-border knowledge.

The 12-hour excursion was an eye-opening one. The mission of the Latino-Jewish Coalition is to promote greater communication, cooperation, understanding, respect and friendship between the San Diego Jewish and Latino communities, not necessarily just those who are both Latino and Jewish. Under the leadership of Linda Feldman, the program’s director, LJC facilitates programs primarily in San Diego County.

“Our goal is to be sure to showcase both the Jewish and the Latino perspectives of whatever the topic might be,” Feldman shares. She explains that LJC is currently focused on immigration and border issues, hence the trip to several high profile locations in the Tijuana region.

The San Diego/Tijuana border is one of the busiest in the world, explains our tour guide, Carey. The stark differences between each side was clearly felt on this trip. Consider Freedom Park, located near the beach in Tijuana. It was made famous in the 1960s as the place where families separated only by a fence could visit each other with ease (in the early days), passing food and sharing hugs over the fence, which was only waist-high at the time. Now it serves to exemplify the contrasting lifestyles. On one side of the gray pylons are vibrant murals; on the other, the San Diego side, it’s drab metal walls, cameras, sensors and border patrol vehicles that clearly display the surveillance efforts of Homeland Security. There’s the strong feeling that you can’t sneeze here without a federal agent seeing it.

Despite the physical obstacles, this trip was intended to highlight how residents of each city can overcome these barriers and work to create cultural bridges between the nations. LJC started the movement in that direction with an ambitious schedule of meetings at institutions and private businesses in and around Tijuana.

A standout stop on the trip was CODET Fundacion, an ophthalmological eye care center founded in 1987 by Mexican-Jewish physician Dr. Arturo Chayet. Today, CODET’s four-story, ultra-modern facility houses his private practice as well as his foundation which provides hundreds of free surgeries monthly to low income families. Of the several physicians, fellows and students who have come through the doors, a half-dozen have had training in Israel.

Our group ate lunch at a five-star destination in the heart of Tijuana’s emerging culinary district. Our prix fixe meal at Villa Savezios featured salmon and asparagus in a cream sauce, accompanied by an outstanding local wine. The foodies in our group raved throughout the meal; as for the wine, I wished I had time to stop by a wine shop to bring some home. Bursting our bubble a bit, Carey told us that only one bottle of wine per person is permitted across the border.

The day finished off with a visit to the Boys and Girls Club of Mexico, which provides after-school and alternative-school care programs for at-risk youth.

No trip to Mexico is complete without a long line at the border. In this case, it took about 90 minutes to cross by foot while our chartered bus waited for us on the other side. All in all, the feedback from those I spoke with was that this trip was fabulous and people would do it again. They won’t have to wait too long. The Latino-Jewish Coalition is planning another event for January, 2016. If it includes a trip to the regional wine country, I’ll be the first to sign up.

For more information about the program and to register for future events, email Linda Feldman of the Latino Jewish Coalition at: latinojewishc@jewishfederationsandiego.com.