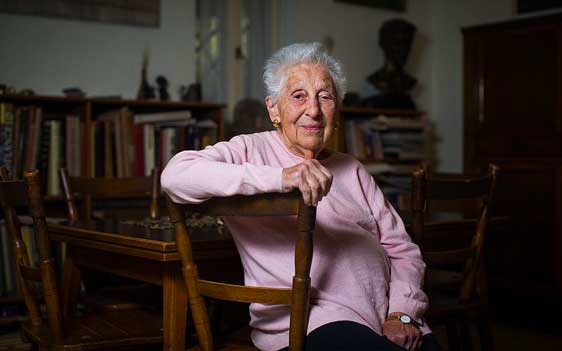 The head of news at the Israel Broadcasting Authority leaned back in his chair with his feet propped on the desk and looked thoroughly bored. It was 1986, and a delegation from the Israel Women’s Network was presenting detailed research on the under-representation of women in Israeli television. When it was finished, he looked at the presenter, an attractive blonde woman. “You know,” he said. “You have beautiful eyes.”
Alice Shalvi’s memoir “Never a Native” recalls events from living memory, but her experiences are so shocking to the modern ear she could have been writing about a different planet.

Alice arrived in Israel in 1949 armed with skills designed to help build the new Jewish wonderland. Instead, she found that the middle-class, intellectual veneer of Jerusalem concealed a looking-glass world of inequality, backstreet abortions, sexual oppression and rape.

The Israel Prize laureate and co-founder of the Israel Women’s Network will discuss her life and work at Beit Avi Chai in Jerusalem on January 15.

She is a former principal of the Pelech High School for Girls, former rector of the Schechter Institute of Jewish Studies, founder of the English department at Ben-Gurion University and an internationally renowned pioneer of the Israeli feminist movement.
Still, Shalvi always felt like an outsider, giving her a critical perspective that would become one of her greatest assets.

Born in Essen, Germany, in 1926, Shalvi and her family were classified as Ostjuden (literally, eastern Jews) because of her parents’ birthplace in disputed Polish territory. They decided to flee after the Gestapo searched the house in 1933. Her father left for London to secure the necessary visas, leaving the family alone, trying to collect outstanding debts. Then they moved to stay with unfriendly relatives in Mannheim.

Nearly a year after her father’s departure, Shalvi, her mother and older brother finally arrived in London. Her father was a successful businessman, so the rootlessness was cushioned by prosperity. But her German birth, Polish passport and Orthodox Jewish upbringing always marked her out as different — a shifting identity further dislocated by evacuation to the countryside to escape the London Blitz in World War II.

Nor did her acceptance to Newnham College, Cambridge, to study English bring much more sense of belonging. Alice found herself invited frequently to dine with the older university fellows at the head table where the college’s two most exotic students — she and an African princess, the daughter of exiled Abyssinian Emperor Haile Selassie — could be probed with subtly racist inquiries.

Raised a Zionist and deeply moved by an encounter with displaced Jewish refugees she helped host in Cambridge after the war, Shalvi decided to pursue a degree in social work at the London School of Economics so she could assist in the rehabilitation of Holocaust survivors in Palestine, where the British Mandate was ending.

Arriving in the newborn state in 1949, Shalvi discovered that no one wanted or cared about her carefully honed social work skills. Unemployed and increasingly desperate, she fell into academia courtesy of a rare enlightened professor at the Hebrew University. That led to a pioneering role establishing a department at the new university in Beersheba and her first introduction to the destructive poison of academic politics.
As she moved from university to high school education, Shalvi became increasingly aware of the second-rate status of women in Israeli society. She found Israeli society infused with the old-school Orthodox position of women as homemakers and childbearers, relegating women to lower-paid and often invisible positions in religion, education, politics, media and the army.

Inspired by a visit to Jerusalem by the US feminist icon Betty Friedan in 1984 and a searing discussion on the status of women “chained” to husbands who refused to divorce them, Shalvi led a women’s delegation to the King David Hotel where Shimon Peres and Yitzhak Shamir were hammering out a new government.

That marked the genesis of the Israel Women’s Network. Within 15 years, under her leadership, the organization helped revolutionize conditions for women in politics, healthcare, the army, the media and employment.

An IWN expose, published in The New York Times in 1998, blew the lid on the trafficking of Eastern European women to Israel for prostitution. Their work on mammograms and health screening brought a marked reduction in the incidence of breast cancer. Their lobbying brought about a huge increase in the number of positions opened to women in the Israeli army.

Without Shalvi and her colleagues, Israel today would be a different, less enlightened country.

by Matthew Kalman, Times of Israel