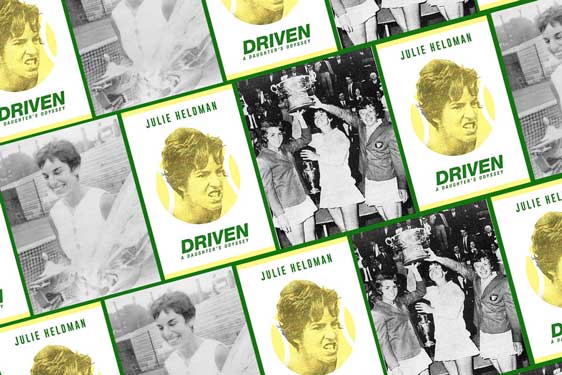 Olympic gold medalist Julie Heldman is ready to speak her truth. The 72-year-old recently published a memoir about her experience as one of the pioneers in women’s tennis. Heldman was part of that iconic group of women — the “Original Nine” — who signed a contract for $1 to protest the pay inequality between male and female tennis players.

“Tennis was not a joy for me,” Heldman tells Kveller. “Aspects of it were. Crunching a winner, that felt good. Being out in the outdoors, running around, that felt good. But playing tennis rarely gave me joy because there was too much stuff in it.”

That “stuff” was mainly her relationship with her mom. (Professional women’s tennis would not exist without her mother, Gladys Heldman, the founder of World Tennis Magazine.)

As the U.S. Open celebrates its 50th anniversary this year, the fight for equality in women’s tennis continues —  even though it is consistently one of the most popular women’s sports. Serena Williams’ immense star power helps the game, and yet, she still faces immense prejudice, like the recent catsuit controversy. There is still a myth that women’s tennis game is “weaker” (fact-checked: not true). And yet, while the sport still has a long way to go, speaking with Heldman underscores just how far women’s tennis has come.

Heldman’s self-published memoir, Driven: A Daughter’s Odyssey, begins with her match against Billie Jean King, seventeen days before King would go on to play Bobby Riggs in the epic “battle of the sexes.” In 1973, Heldman defeated King; King went on to beat Riggs (something Heldman knew “was possible”).

The 1960s and 70s was a decidedly tough time to be a female tennis player. In 1970, the ratio of prize money for men to women was 8:1, and the United States Lawn Tennis Association (USLTA) barely organized any tournaments for women.

So Heldman’s mom, Gladys, created a separate women’s circuit, getting nine women — including her daughter —  to sign on to the inaugural tour. She offered them a $1 contract. She couldn’t afford more, and it was also to protest the inequality in prize money, and to prove that women’s tennis could be a draw.

“We were rebels who stood up for ourselves, and for the money we wanted to earn, and for the future of women’s tennis,” Heldman recalls.

In fact, they were paving the way for all female athletes. “There were women everywhere who looked to us and saw that something really good was happening,” Heldman says, “we weren’t somehow outcasts as women athletes.”

You may know Heldman’s mom from the 2017 film Battle of the Sexes — Sarah Silverman portrayed her. Heldman, however thinks of the movie as fiction: “My mother was powerful, brilliant, made the tour happen,” she says. “And the way [Silverman] played [her] made her seem like this lightweight and she wasn’t!”

But Heldman credits the movie with inspiring her to finally tell her story.

“There weren’t too many Jewish people running around in the tennis world in that era, and my mother was one of the singularly most powerful people in the world of tennis,” Heldman explains. “She was a very powerful Jewish woman. And I would not, in the least bit, be surprised if some of the way I was treated was because I was the daughter of such a powerful Jewish woman.”

But her relationship with her emotionally abusive mother was often strained. “Finding my truth has been essential,” Heldman says about the process, “but in order to get to that truth, it’s often very painful.”

Growing up Jewish in California, Texas, and New York, and playing tennis in a very non-Jewish world, Heldman recalls feeling like an outcast. The tournaments that determined a player’s ranking were all held at private tennis clubs on the east coast; ones that were never welcoming to Jews.

But she never felt the discrimination as acutely as her father — who was one of the top young tennis players in the U.S. in the 1930s. As Heldman recounts, “He was one of the best young players in the country, and he had zero money [because] his parents were quite poor immigrants. He was denied the ability to practice and play against other players at the Los Angeles Tennis Club because they did not allow Jews to be members or play there.”

After giving birth to her daughter, Amy, at age 41, Heldman left tennis for good. Amy took a few tennis lessons as a kid, but she wasn’t very interested. Heldman never pushed it.

Heldman’s tennis career surpassed that of her parents: In addition to winning three gold medals in the 1968 Olympics, she reached a career high ranking of number 5 in 1969, and won the Italian Open in 1969. She also made it to the finals in the French Open, Australian Open, and U.S. Open.

And how does she feel now that her memoir is out into the world?

“It feels good,” she says. “Every once in a while, I think, am I really talking about these things that are so personal? The answer is, yeah, I am.”