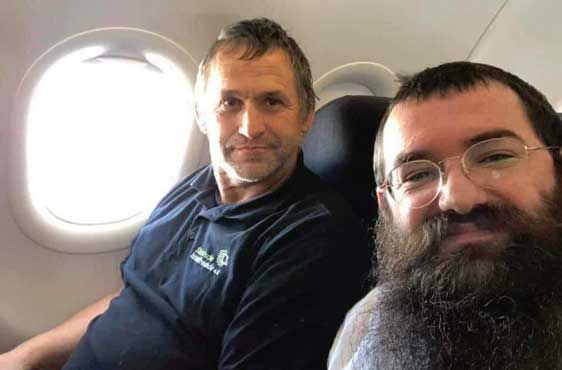 Rabbi Zalmen Wishedski, right, wrote a Facebook post about his conversation with a German man who travels to Israel to renovate Holocaust survivors’ apartments. (Wishedski)

(JTA) — Rabbi Zalmen Wishedski had an unexpected encounter on a recent flight to Israel.

Wishedski, who was flying on Monday from Basel, Switzerland, where he works as a Chabad emissary, was praying when a man seated next to him handed him a piece of paper.

The note was from an organization called the Saxon Friends of Israel and described how the group brings volunteers from Germany to Israel to renovate Holocaust survivors’ apartments for free.

The two started talking and the man, a house painter named Roland, said that he had been traveling to Israel twice a year for around five years from his home in the south German state of Baden-Wurttemberg to do the volunteer work.

“I cannot change or repair the whole world, I cannot repair all my people did 70 years ago,'” the rabbi recalled 54-year-old Roland telling him. “All I can do is painting. It’s what I’m doing, bringing a little bit of good to the world.”

Wishedski, who was born in Israel but has been living in Basel for 16 years, was touched by the selfless story.

“This was very, very good because sometimes we give up because we can’t change the entire world, and he told me that if you can change the house of one woman, it’s worth it,” the rabbi told JTA.

JTA attempted to contact the Saxon Friends of Israel to get in touch with Roland but did not receive a response.

Meanwhile, Wishedski has been fielding calls from journalists from Israel and the United States.

This promotional video from 2013 gives a little more information on the Saxon Friends of Israel and shows them in action fixing Holocaust survivors’ houses. One volunteer explains that both of his parents were avid Nazis and that he is the only one in his family who wants to “deal with the issue.”