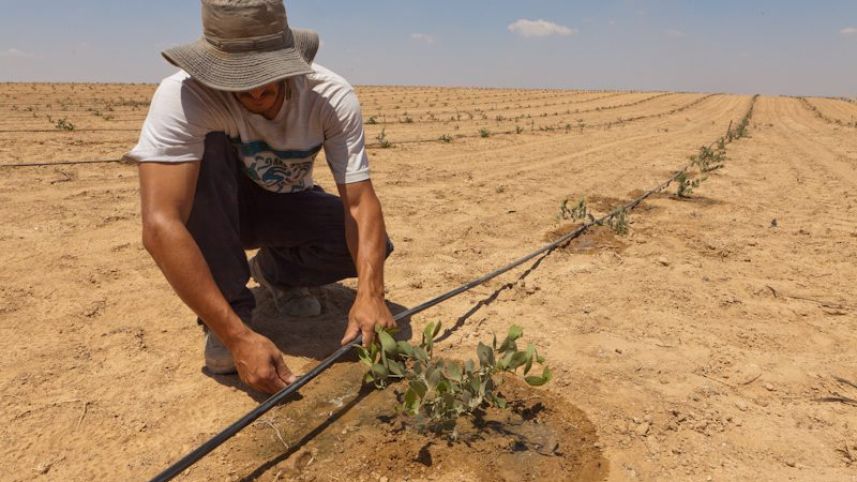 The world's problem with water isn't that it's disappearing. The water is there. The problem is that in many areas, growing populations have less and less water per capita because of crumbling infrastructure leading to massive leaking; short-sighted and self-interested water management, leading to egregious waste, and polluted groundwater. Can ideas from Israel really help solve these problems at a planetary level?

Yes, because in a process lasting decades, Israel achieved something unique. It largely separated its water consumption from Mother Nature. Israel doesn't have some one-stop-shop magic solution, neither desalination (which it didn't invent) nor some breakthrough dreamed up by geniuses in garages. What it has is holistic, centralized water management, designed over decades, from which thirsty areas from California to Egypt can cherry-pick ideas, argues Seth Siegel, author of the best-selling book "Let There Be Water". Why reinvent the wheel when one can emulate it?

"Israel should have been a water basket case," says Siegel, listing its problems: 60% of the land is desert and the rest is arid. Rainfall has fallen to half its 1948 average, apparently thanks to climate change, and as global warming progresses, Israel and the whole Levant are expected to become even drier – and from 1948, Israel's population has grown 10-fold.

During that time,  the country's economy grew 70-fold. But instead of starting to wastewater, as happens when a society becomes wealthier, it used its new affluence to implement what Siegel calls "the Israel model" of water management.

California demonstrates the opposite example of what happens when money is abundant but nobody acknowledges the problem, governance is local and people don't think how to utilize the rare resource most wisely for the greater good.

Israel uses its groundwater and lake water, yes. But the key to its water security are efforts such as drilling deep wells, massive desalination, reusing treated sewage for farming, finding and fixing leaks early, engineering crops to thrive in onerous conditions, discouraging gardening, making efficient toilets mandatory, and pricing water to discourage waste. The state preached water conservation (note the TV ads not to be a pig in the shower) – and then there's the holy grail of Israeli water innovation: drip irrigation.

The Jury and the Drip

Drip, also called micro-irrigation, was the first watering innovation in thousands of years. Instead of flooding the fields with prodigious amounts of water and fertilizer, much of which get wasted, small amounts of both are dripped directly onto the plant's roots.

Netafim, which makes drip irrigation technology, says the technique saves 25%-75% pumped water compared to flood, on average. So, the farmer uses less water, fertilizer and sometimes pesticides, and is happy. The aquifers suffer less chemical pollution. The crops yield more (about 15%, say Netafim and some experts) and food prices drop, so the consumer is happy.

Everyone is happy, except some academics, who would like proof. Prof. Frank Ward of the New Mexico State University Department of Agricultural Economics and Agricultural Business does, for one. "What we have found is that as a consequence of putting water on the crops more precisely – actual water consumption can go up," Ward told Haaretz.

Man has been irrigating his fields by flooding them since farming was invented over 12,000 years ago. Some of the water soaking the land is used by crops, some evaporates, some sinks in and recharges the  aquifer.

Everyone and his dog agrees that drip irrigation is one of "Startup Nation" Israel's greatest inventions. Actually it was invented by a former government official named Simcha Blass, who sold the rights to  Netafim. The company says that compared with flood irrigation, drip even causes rice and tomatoes to emit less greenhouse gases and nitrous oxide – emissions of which have been associated with deadly algae blooms. These days there are even technologies to fine-tune drip, for instance, sensors that, when stuck into a tree, measure the actual plant's water stress, rather than that of the soil by the root.

As drip involves no aquifer recharge to speak of, less fertilizer, pesticides and lord knows what other horrible chemicals leak into our groundwater. Massive influxes of fertilizers and pesticides causing hormonal disruption are being blamed for anything from micro-penises among Floridian alligators to gender-fluid fish and other unnatural horrors.

But does it save water at the level of a whole region, a whole state, the planet? In 2008, Ward warned that governments are leaping to adopt water conservation ideas that may either not conserve water at all, or not as much as believed. Little integrated analysis has been conducted to test the hypothesis that water conservation technologies really achieve that specific aim, Ward cautions. Indeed, efforts to find studies that compare flood with drip side-by-side (keeping other factors constant, insofar as possible) were in vain.

The question bears asking because after Israel showed the way, water-stressed countries around the world have been adopting drip, when they can afford it - "Converting is expensive," Ward points out. How could it be possible for crops to be given less water with drip than with flood, but wind up using more water?

With drip, less water is lost into the ground. But Ward suspects that total crop water consumption from drip is greater than assumed because of the higher crop yield and because the plants are healthier.

His doubts began after years of speaking with agricultural engineers in the south-west United States, Ward says. "For years I assumed that central pivot sprinklers and drip irrigation were good water conservers because everyone said they were," he confesses. "But the agriculture engineers I worked with told me I want to reconsider that, and that the reason I should, was because drip irrigation is very good at reducing water applied to the crop, without any waste compared with flood but the water actually consumed by the crops can build up."

If crop yields increase 15% under drip, crop water consumption also increases, he explains. "It depends on crop soil type and how you manage it," but "it is pretty safe" to assume that the increase is proportional to crop yield.

Could drip better suit some environments and not others? "I am for drip irrigation because farmers love it and my food prices go down. I would say that the jury could be in or out if it's good for the environment – it depends on what kind of environment talking about," Ward says.

"In a nutshell: whether a shift from flood to drip irrigation is advantageous or not to groundwater supply depends on the hydrological and regulatory environment in which the farming operation takes place," says Sandra Postel, director and founder of the Global Water Policy Project and a world expert on freshwater issues and related ecosystems. For example, the Jordan River, or Nile, which are both extremely depleted by irrigation, may benefit from the use of drip by farmers nearby because the method depletes the river environment less, Postel says.

Netafim acknowledges that it does not know of side-by-side studies comparing drip with flood that would tease out the parameter of effect on the water table. "The argument that drip's efficiency increases water usage and yields, thereby leading to greater aquifer depletion, does not point to a drawback of drip, but rather a failure in water resource management," the company stated.

"Most stakeholders agree that drip is the most efficient irrigation method for nearly every crop," Netafim stated. "However, that does not mean that it always makes sense for growers to transition to drip for certain crops, such as wheat. With that said, there are farmers in Texas, for example, who achieve better results by using subsurface drip irrigation systems for their annual cotton, corn and wheat crop cycles." It also points out that in contrast to flood, drip is good for all surface types, including slopes.

Meanwhile, various teams, including Ward's, are considering how to evaluate the impact of long-term, wide-scale drip irrigation on local water economies, not that everybody agrees it's necessary.

"Utter nonsense," says Uri Shani, former water commissioner and professor of irrigation at the Hebrew University of Jerusalem. "They claim that water isn't lost from flood irrigation because it recharges the groundwater but that's twisted in multiple ways," among them – when water returns to the ground, it goes where it goes, not necessarily to the aquifer.

Meanwhile, India for one is encouraging drip's adoption through subsidies, says Siegel. At the other end of the rainbow, California had initially been glacial at adopting drip, for several reasons. Here's one: "In the western U.S., the 'use it or lose it' system of water rights provides little incentive for farmers to conserve water because they then risk using some of their water rights," Postel observed by email. "State policies (and water markets) are beginning to change that incentive structure."

Once, the United States encouraged people to move out west by giving them water rights in perpetuity. Take farmers living along the Colorado River. "You can take as much water as you want with no limit," Siegel says. "No one is controlling it and there is zero incentive to innovate or conserve. You can flood irrigate all day long. If it was ten farmers, okay, but by the time the river reaches Los Angeles, it's a trickle."

Also, people moved to places that shouldn't be habited at all, like the desert. Anyway, the upshot is that today, the American West has a "horrible water governance problem", as Siegel puts it: Israel has one central water authority. Texas has 4,600 public water systems, each with its own interests. It's a towering Babel of incoherence, from a policy point of view.

By now, Siegel adds, 38% of irrigated fields in California use drip. Israel may not have much to teach California about desalination, but it sure has lessons in central management so everybody can drink and shower.

The Nile and the dual-flush toilet

Another key to water conservation is to exploit wastewater. Israel treats almost all its sewage and reuses the water in agriculture. Egypt may not have the resources to build giant desalination plants but it could affordably treat sewage rather than dump it into the Nile, and plant "advanced" crops that grow well in onerous conditions.

They could also train plumbers and engineers. "Cairo has a phenomenally bad problem of broken water pipes," says Siegel. Pipe leakage is about 20%-30% in Western Europe; in Cairo it's about 50% and in Israel it's 9% to 10%, making it second in the world after Singapore. Israel has smart technologies to find leaks and solutions that don't involve tearing up whole streets to replace pipes.

Maybe Cairo should also subsidize dual-flush toilets, which are the only type available in Israel. "Does one flush make a difference? Nah. But multiply by 8 million Israelis peeing six times a day, or 80 million Egyptians, and we're talking about real water," Siegel says.

Realizing its predicament decades ago, Israel studied the "water equation" and made itself all but independent of Mother Nature. But it's lonely in that. Making bad matters worse, climate change has begun to hit hard. Changing governance, raising money and installing technologies takes time and the climatic stresses are mounting fast. The world doesn't need to take the 70 years during which Israel has been solving its water problem, says Siegel: Israel did the work already. The world can emulate it. But it has to get a move on before the water runs out.

By Ruth Schuster for Haaretz