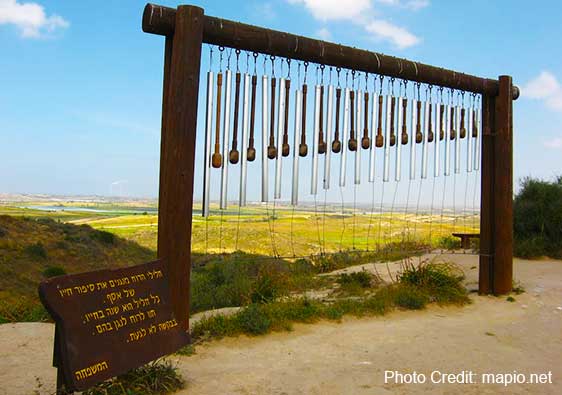 The location of the memorial has 20 chimes (one for every year of my host mother's nephew's life) because he loved to go to the hillside with his cow and think in peace and quiet.

In 1997, I attended my first memorial and funeral service. It's hard to imagine that as a 20-year-old I had never attended a funeral, but this was the case. That memorial service will forever be a vivid memory. Not because it was my first, or who the memorial was for, but because of what it represented—the loss of 73 lives on February 4, 1997, when two Israeli Air Force transport helicopters ferrying Israeli soldiers into Israel's security zone in southern Lebanon collided in mid-air, killing all Israeli military personnel on board.

Experiencing a funeral is always an emotional experience, but having that as a first experience, and in Israel, was something unimaginable. I was the same age as a number of the soldiers that lost their lives that day, but they were light years beyond me. They were committed to their country and protecting the lives of millions. The entire country mourned as one family together, as is often the case when one Israeli falls.

Twenty years later, my position at the Jewish Federation would take me back to the land I called home for almost three years. I fondly remembered my time as a twenty-something who had few responsibilities and spent a lot of time beachside in Tel Aviv. What I wasn't anticipating was the surreal experience I'd have on a hilltop in San Diego's sister region Sha'ar HaNegev, which borders Gaza. I had never ventured farther south than Ashkelon prior to 2017.

On a late July day in 2017, my "host parents" would take me to a hillside and recount a story of my "host mother's" (Avital) nephew Asaf Sibony, z"l. I looked at the sign as they were recounting how Asaf bravely lost his life and noticed his birthday, which was only 6 months before mine. It quickly sunk in that Asaf was in fact one of the soldiers who had lost his life in the crash, and I had attended his memorial 20 years earlier.

I began to feel so many things. Avital shared that they chose the location of the memorial with 20 chimes (one for every year of his life) because he loved to go to the hillside with his cow and think in peace and quiet. The sun was setting, but I didn't want to leave that spot. I wanted to make sure that I would forever remember Asaf and his favorite peaceful place.

That experience forever changed me, not unlike many experiences that I (and I hope others) have had because of the Jewish Federation. I am proud to work for an organization that sends more money than any other organization in San Diego to Israel for social service programs. I am regularly inspired by the resiliency of my "family" in Sha'ar HaNegev and Eretz Israel. Am Yisrael Chai!