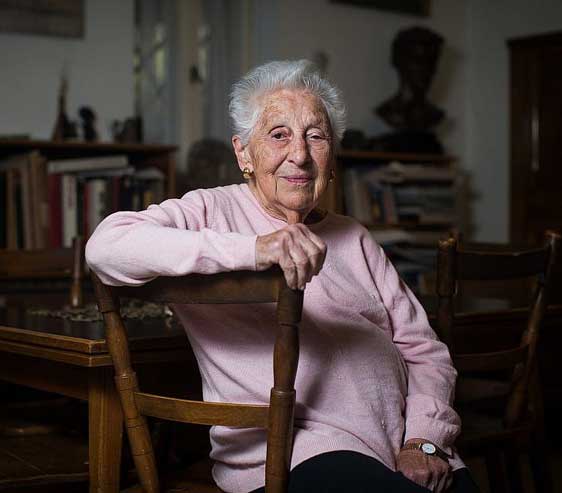 Alice Shalvi, now 92, is the most famous Israeli whom the average American Jew has never heard of. Revered Hebrew University English professor, principal of the Pelech school, founder of the Israel Women's Network, rector of the Schechter Institutes, intrepid feminist activist, prominent advocate for Israeli-Palestinian peace, and winner of multiple honors—among them, the Israel Prize, the country’s Nobel—Shalvi nonetheless remains virtually anonymous in the mainstream Jewish world.

Thankfully, that situation has been rectified this month, by the publication of her memoir, Never a Native.

I first met Alice in Jerusalem in a meeting room at the King David Hotel on March 7, 1978. I know the precise date because she was there at my invitation. I was an editor of Ms. magazine at the time and months before, in a moment of lunacy, I had agreed to organize a feminist tour of Israel to give our American readers the chance to see Israel “through the eyes of women who live there.” Fifty-two women and four men signed up for the trip.

Gathering speakers for the week’s educational sessions wasn’t easy. Google and email didn’t exist 40 years ago. I had to plan the entire itinerary by phone and telegram. I began by calling my Israeli friends and asking them to suggest the best people to speak on each of the topics I hoped to cover.

Whatever the issue—women’s status in the workplace, synagogue/state relations, the Israeli-Palestinian conflict, domestic violence, rape, sex discrimination in education, insurance, the military—Alice Shalvi’s name popped up on nearly everyone’s list. I invited her to join the panel that would update our group on the progress of the Israeli women’s movement.

The Alice who arrived at the King David that evening was a white-haired leprechaun with the silhouette of a Russian nesting doll and the British-accented eloquence of Abba Eban. It’s no exaggeration to say that her wide-ranging expertise and coherent in-depth analyses of women’s issues blew us away in 1978 and have continued to impress everyone who has known or worked with her since. More than that, while her movement credentials are unimpeachable, she is a living refutation of feminist stereotypes.

Alice was married for more than 60 years—ecstatically, romantically, devotedly—to the late Moshe Shalvi, with whom she spawned six children and almost uncountable grandchildren. Her religious observance lines up with what we call modern Orthodoxy. The refinement of her personal style betrays her privileged upbringing in Germany, where she was born in 1926, and then in England, where her family took refuge in 1934.

Alice’s recollections of the war years in her book are uncharacteristically sketchy. From her childhood in Essen, she recalls being terrified when the Gestapo raided her house and when her brother came home battered by Nazi street thugs. In London, she remembers taping the windows, air-raid sirens, gas masks, running to the shelter.

More vivid by far are her cultural memories—growing up with “a gramophone, records of Gigli, Jan Kiepura, famous cantors; opera, cinema, theatre.” She heard the child prodigy Yehudi Menuhin play at the Royal Albert Hall. During the blitz, her affluent family had to leave London for a “less luxurious” abode in Buckinghamshire. Still, her mother, a dutiful practitioner of “two cardinal virtues of Judaism: charity and hospitality,” continued to provide meals for anyone who came to their door, once hosting a Seder for more than 30 Jewish soldiers stationed in the neighborhood.

Until I read the memoir, I hadn’t realized how precisely Alice’s hospitality gene was copied from her mother’s. I simply felt grateful that when in Jerusalem, I’ve had the good fortune to sit at the Shalvis’ Shabbat table along with guests from all over the world who gravitated there because Alice, having met them during her travels, had issued an open invitation.

Nor had I understood to what extent her strengths and proclivities—cultural, social, religious, Zionistic—were nourished by her father, an active Zionist and co-founder of both a publishing company that disseminated Hebrew books and a weekly newspaper whose back page featured Yiddish writing. As a child, Alice was provided with a Hebrew grammar tutor. After the war, her family employed a chauffeur, daily household help, and a nanny. No wonder Alice became, for lack of a better word, a lady.

Before she was 4, she had taught herself to read German and often gathered other children in a circle so she could read aloud to them. She invented imaginary alter egos to amuse her friends and regaled adults with plots of movies she’d never seen but whose stories she’d deduced from the billboards outside the movie theater across the street. Denied a formal Jewish education, she eavesdropped on a playmate’s father’s Hebrew drills and volunteered the correct answers before his children could.

When she arrived in England, her classmates initially ridiculed her as “a little refugee” but by the end of the school year, Alice was at the top of her class. She fell madly in love with English literature. In a competition for best essays on the British Empire, her paper about London won a prize. She became an ardent monarchist. When King George died, the little refugee wore a black armband.

Alice’s life’s purpose—a fierce “determination to eliminate suffering”—took root one rainy day while she saw a hungry old man in rags, soaked to the skin, shivering in the doorway, and felt powerless to help him.

Entering Cambridge a year earlier than her age group, she made meaningful friendships, dined with the dons, played competitive tennis. The Jewish Society claimed most of her free time; she danced the hora, joined a Zionist study group and discussed Herzl, Ahad Ha’am, Leo Pinsker. Eventually she was elected president of the society and in 1946, she attended the World Zionist Congress as a junior delegate. After Cambridge, she went to the London School of Economics and got a degree in social work. You get the idea; she was a star.

This upbeat story, told with her notable literary grace, renders all the more stunning the dark personal revelations studded into her narrative like raisins in an angel food cake.

“I was not like the other girls,” she writes about her London schoolmates. “I was alien, not only Jewish but a foreigner, and though my flawless accent did not betray my foreign birth, my ignorance of … upper-class British traditions and mores would.” At Cambridge, she felt ill-prepared: “I seldom achieved illumination in tutorials, discussion groups or lectures.”

Comments about her appearance left deep wounds. “I did not meet ideal standards. My bust was too small, my hips too broad.” She was ashamed of being “plump.” Before she had a boyfriend, she retreated into one of her fantasy alter egos, “a witty, physically more attractive person far more successful than me in winning the attentions of the opposite sex.”

When anti-Semitic insults became too much to bear, she detached from her “Jewish self” except in the privacy of her home. At the same time, she bore immense guilt for her ignorance of the Holocaust and became aware of “a startling paradox: while the extermination of European Jewry was in progress, I was enjoying what were undoubtedly the happiest years of my adolescence, safe and secure amidst the natural beauties of rural England.”

On her first visit to Palestine in 1947, a month after the U.N. voted in favor of partition, Alice felt she’d come home. Two years later, she made aliyah. The memoir delineates her upward trajectory in Israel—her achievements as an educator, public speaker, social justice activist, and public intellectual—and how her life paralleled the new nation’s growing pains.

However, Israel did nothing to relieve her self-doubt, shame, and self-abnegation. She had hoped to do social work with Holocaust survivors but discovered her “qualifications were totally inappropriate.” By accident, she found a job teaching English at the Hebrew University (her former students include Hebrew poets Yehuda Amichai, Dalia Ravikovitch, and Dan Pagis) but became “frightened, overcome by a feeling of inadequacy and impending failure.”

In 1958, her adoring husband entered her into a national competition for Housewife of the Year, though, she insists, “I wasn’t an appropriate candidate.” (She won second prize, a week’s vacation at a seafront hotel in Herzliya, where she wrote the first draft of her doctoral thesis on four Shakespeare plays.)

This expansive tally of her personal weaknesses and perceived failures is in jarring contrast to her record of achievements and contradicts the confident image Alice has projected for decades. Despite the cognitive dissonance, her confessions are too raw to register as false modesty. Rather they serve as poignant testament to the durability of the female impostor syndrome and the emotional fortitude required for any competent woman to function at her best in a judgmental patriarchal world.

The memoirist’s self-criticism reaches its apogee in three heartbreaking passages: One describes a violent “seduction” by her landlord, an event she partly blames on herself before conceding that today it would be called rape. She beats herself up for her inability to breastfeed her children and for being away from home so frequently because of the demands of her work: “In retrospect, I’m painfully aware that, while I attained renown for my professional and public activities, I was a failure as a mother.” And she admits to having had an illegal abortion that she never told Moshe about. “In fact,” she writes, “I told nobody. I have never spoken of it.”

The unspoken and the unspeakable unspool alongside the skeins of her long life that spun out in plain view. She revisits episodes that sensitized her to gender inequity: The sexist pushback she got from higher-ups when she was the founding chair of the English department at the Institute of Higher Education in the Negev. The misogynistic humiliations that doomed her application for the position of dean of Ben-Gurion University. Her service on the Namir Commission, tasked by the Knesset with proposing legislation and other changes to improve the social, economic, and political status of women. Her tenure as principal of Pelech, a high school that aims to provide Orthodox girls with both a secular and religious education, where she got whipsawed by conflicts between Orthodoxy and modernity. Her pioneering role as co-founder and chair of the Israel Women’s Network, a nonpartisan organization dedicated to advancing women’s status through advocacy, consciousness-raising, litigation and legislation. On being named rector of the Schechter Institute of Jewish Studies, the coda to her career, Alice again demurs: “My qualifications for this particular post were negligible.” Yet she initiated new projects, like Nashim, the journal of Jewish feminist studies, created a Centre for Women in Jewish Law, and ended up as the institute’s (reluctant) president.

As a child, her favorite book was Alice in Wonderland. Her memoir could have been called “Wonders in Aliceland” but Israel’s Alice doesn’t do hagiography. Never a Native is an astringently candid, historically significant book about a little refugee who, despite suffering myriad self-doubts typical of women of her generation, lived a very large life.