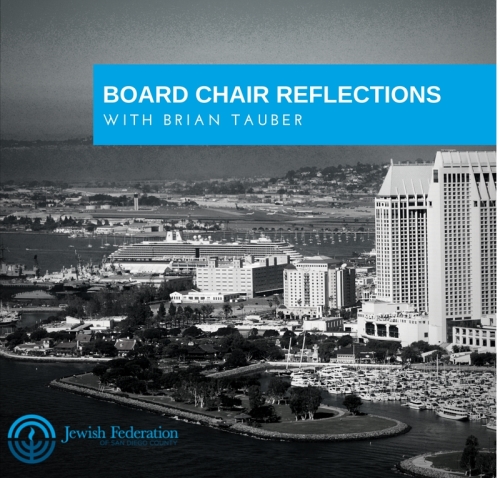 “It’s the little things that win championships" —Any coach

A universal truth in the sports world, this maxim betrays the very words it employs.  By “little”, we often infer less importance in the subject it describes, when, in fact, those “little things” are precisely those activities that distinguish the winners from losers.  Practicing and executing those tasks may not be as grandiose as others (good defense v. an eye-popping dunk), but their impact and importance often define the ultimate outcome.

This past year, I attended Federation’s Men’s Event, a tremendous gala honoring the men who generously support Federation in its quest to ensure a strong Jewish community.  One of the featured speakers was Scott Stein.  Scott is one of America’s true heroes – a firefighter whose mission is to ensure our safety and protect our life and property.  Unfortunately, Scott and his family have confronted challenging times.  At a particularly difficult, dark time, Scott’s sister was fatally ill and his mother diagnosed with cancer.  Their connection to their Jewish heritage was tested – his mother was understandably devastated during this time of watching her child suffer.  For those of you who are unaware, Federation has the fortune of having one of my favorite people, Rabbi Ralph Dalin, serve as our community chaplain, a position that encompasses a potpourri of activities to support those in need in our community.  In this instance, Rabbi Dalin was able to provide much needed comfort to Scott’s mother as she mourned the illness and death of her daughter.  Years later, Scott’s mother succumbed to cancer.  Again, Rabbi Dalin provided a sympathetic ear and the comfort of community – this time to Scott.  Scott explained how his experience with Rabbi Dalin was invaluable to his mother and to his own recovery from such horrible losses.  He was not alone.  After years of feeling distant from the community, Scott credits Rabbi Dalin as instrumental in his current situation – one that includes a wife, two children, and a reconnection to the Jewish community for him and his family.  As the true testament to his sentiments, Scott has referred Rabbi Dalin to a good friend, someone who also benefited immensely from Rabbi Dalin’s heart.

I have been involved in the San Diego Federation for over 15 years, so I know of all the good work it performs.  Well, not exactly.  At one of my periodic morning coffees with Rabbi Dalin recently, he described a program he organized about which I had NO idea.  Despite our dream of a completely connected Jewish community in San Diego, there are many who have no knowledge of our very existence.  Enter Rabbi Dalin.  He recognized that there was no specifically Jewish bereavement group offered in San Diego County for those seeking support and community in their grieving following a loved-one’s death.  He recruited Rabbi Aliza Berk to facilitate several six-week sessions each year and obtained generous funding for this purpose from LightBridge Hospice Community Foundation’s Jewish Hospice Fund and Am Israel Mortuary.  For those who are suffering the pain of loss, these groups can provide emotional support that can transform lives.

At Federation, we rightly feature some of our signature activities that strengthen our Jewish future and save lives both locally and around the world.  Few know of the many critical needs that Rabbi Dalin meets and the lives he impacts.  We, as Federation supporters, are fortunate to be able to help the Steins, members of the Jewish bereavement groups and many others throughout San Diego.  These are the “little things” – those activities that are so essential to community strength that do not make headlines but exemplify the impact we have on our fellow Jews in need when we support Federation.