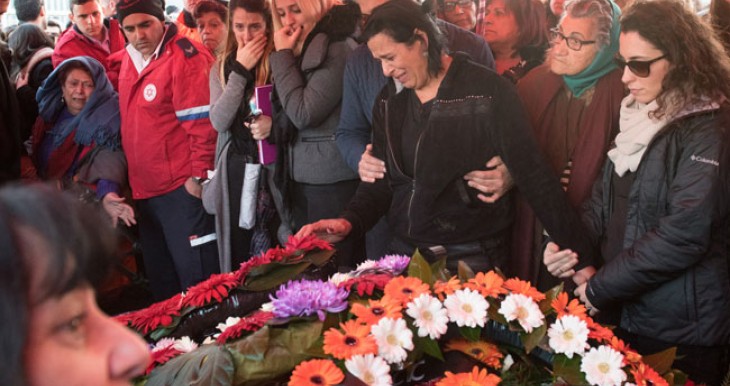 Last fall, we asked you to help us support The Jewish Agency for Israel’s Fund for the Victims of Terror after a wave of terrorist attacks struck Israel. You answered the call and have helped countless families rebuild their lives in the wake of such tragedy - we never expected this story to strike as close as it did, allowing us to see the impact the fund makes closer than ever before.

Last week’s terror attack, at a bar in the heart of Tel Aviv, was a tragedy that struck close to home.

We received an email from our beloved Jewish Agency colleague, Danielle Mor. Danielle, among other responsibilities, works with the Fund for the Victims of Terror, which provides Israel’s terror victims with direct, immediate financial assistance after an attack.

Danielle’s sad and eloquent words speak for themselves:

“My Safta (grandma) Turan – left side, wrapped in a scarf sitting next to a paramedic, crying at the funeral of Alon Bakal – her grandson

I want to share with you a terrible tragedy that happened to my family less than a week ago.

My amazing cousin Alon Bakal, 26 years old, was shot dead by a terrorist last Friday afternoon while working as a shift manager at a Tel Aviv café. Out of nowhere, without warning, and in one second, Alon is gone. Alon was about to graduate from law school and start interning at a prestigious Tel Aviv law firm. He was the best young man you could imagine, the kind you would want to be friends with – served in the Golani combat brigade, volunteered in a poverty prevention organization, cheered his favorite Hapoel Jerusalem basketball team and called his mother every morning.  Though I have been working closely with The Jewish Agency’s Fund for Victims of Terror for years, I never really thought my family would be one of those it gave assistance to.

The news stories speak a lot about Alon, show images and recordings of his grieving mother Nitza. I want to tell you about my Safta, Alon’s grandmother. My Safta (grandma) Turan came to Israel from Iran at age 18 with my late grandfather and my father who was an infant at the time.  It was 1949, they left everything, and arrived with nothing to the Maabara (tent town) The Jewish Agency built for olim like them. My Zionist grandfather made the decision for the three of them – as she told me,“ I couldn’t say a word, he told me - after 2000 years Am Israel Chai, we are going!”

She became the mother of 12 children, the Safta of 50 grandchildren and she doesn’t want to count the great grandchildren for fear of the evil eye.

Though to this day, at 84 years of age she cannot truly read or write, she is the strongest most courageous and smart woman I know. This Sunday, she buried her grandchild – Alon Bakal who was murdered by a terrorist in the Tel Aviv café where he worked.

Safta has a nickname for many of her grandchildren – Alon was “the model” due to his good looks but more so, for his good heart and ambition. Our family is strong, we get our strength from my Safta. We are here to keep Alon’s memory alive, to try and strengthen his mother, father and siblings, although we all know the wound will never heal and that the personal road and the road for us all as a people, as a society, is long.  But we are here to stay. As my Safta quotes my late grandfather –
“Am Israel Chai עם ישראל חי”