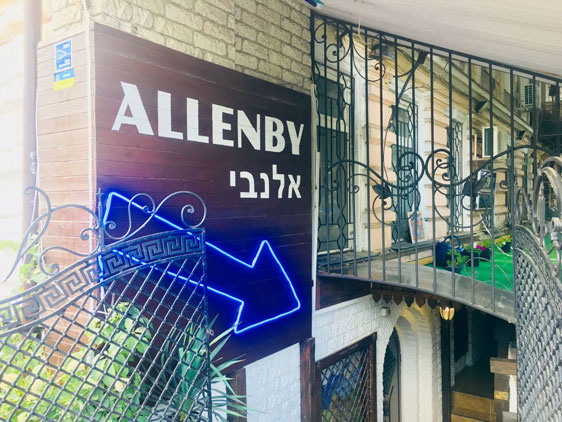 The history of Odessa is also the history of Tel Aviv. Long before the State of Israel was founded, the Jewish community in Odessa raised money for the land where Tel Aviv was established. Odessa was the birthplace of Revisionist Zionist leader Zeev Jabotinsky, of essayist and Zionist intellectual Ahad Ha’am and Israeli national poet Haim Nahman Bialik. And it was in this Black Sea port city that modern Hebrew was born in the poems of Shaul Tchernichovsky and where Tel Aviv’s first mayor, Meir Dizengoff, spent his formative years.

It is this rich Jewish intellectual tradition that Vladislav Davidzon and his wife Regina Maryanovska-Davidzon draw on in their literary creation, The Odessa Review. This English-language magazine in the style of The New Yorker and The Paris Review is profoundly Jewish and Eastern European. Davidzon, a fast-talking New Yorker, was born in Tashkent, Uzbekistan, to Russian-Jewish parents who moved to New York’s Brighton Beach (also known as “Little Odessa”) when he was age 7. Following a childhood steeped in Russian culture and literature, he went on to major in Slavic studies and philosophy before meeting his wife, an Odessa native, in Paris – where they live part of the year.

Galvanized by Maidan – the 2014 pro-European revolution that ousted Ukrainian President Viktor Yanukovych – the Davidzons were compelled to play their own part in the evolution of a new Ukraine: “A liberal and cosmopolitan Ukraine where Jews and Ukrainians stand as equals,” Davidzon wrote in an introduction to a recent Jewish issue of the magazine focusing on “the relationship between Ukrainians and Jews – past, present and future.”

“From the Pale of Settlement to the Promised Land,” one headline reads. Another promises “Jewish humor from Odessa’s Moldavanka,” referring to the raucous Jewish ghetto so vividly depicted in Isaac Babel’s “Odessa Tales.”

Davidzon’s vision is of a country “where Ukrainian scholars study Yiddish to read the works of great Jewish writers, where Odessan Jews tell their city’s famous jokes in Ukrainian [and] where Jewish history is recognized as a critical part of Ukrainian history.”

Over tarator, a chilled yogurt and dill soup, and traditional Slavic kompot in one of his favorite Odessa haunts, Davidzon says his dream is becoming a reality.

Odessa, and Ukraine, he says, are both experiencing a “golden age.” The majority of the Jewish population may have gone but the “Jewish experience is everywhere,” he says. The DNA of the culture of the city is Jewish.”

Maryanovska-Davidzon agrees. Her Jewish-Odessan family, assimilated first in Soviet and latterly Ukrainian society, was one that was always culturally Jewish, from the gefilte fish and eggplant her grandmother prepared to the literature and art they consumed.

Now, she says, the Jewish cultural revival is stronger than ever – helped in no small part by a very active Chabad community, and Israeli and Jewish cultural centers that have become a focal point of Odessan Jewish life.

“We have Israeli cinema week and multiple Israeli cultural events in Odessa throughout the year. There are many mixed (Jewish and non-Jewish) families in Odessa – and almost all of them are involved in Jewish cultural life,” says Maryanovska-Davidzon.

Bloody past
Jewish religious life in Odessa has also seen a revival. The city has two synagogues with active congregations: The Main Synagogue, which dates to the city’s founding and the first Jewish community in 1798; and The Old Synagogue, built at the turn of the 20th century and renovated by the Chabad movement in 1996.

A third synagogue, Brodsky – built by Jews from Brody in 1863 – was the largest synagogue in the south of what was then the Russian Empire, famed for the beautiful singing voices of its cantors. Today it is a dusty shadow of its storied past. Two years ago, the synagogue was returned to the Jewish community after a century of state control. Once restored, it will host the Chabad congregation and the Odessa Jewish Museum and Tolerance Center. This will be a significant upgrade from the unmarked courtyard and four crowded rooms that comprise the current community-run Jewish museum, populated with donations from families who mostly fled Odessa. As a result, it is more an overflowing depository of Jewish domestic artefacts than an organized exhibition that follows a clear chronology.

The optimistic Jewish Odessa of today is hard to square with the city where 300 Jews were killed in a bloody pogrom in 1905 – one of five such massacres that roiled the city’s Jewish population in the 19th and 20th centuries. But despite reports of virulent anti-Semitism in Ukraine, Davidzon is adamant that Odessa, and Ukraine, is more tolerant than its Western European neighbors.

“I had one [anti-Semitic] incident in 10 years,” he says. “But this country is totally safe for us. There is no organized anti-Semitism in Odessa, and I often tell people that I feel safe walking in a kippa in Odessa and Kiev, but not next to my apartment in Paris.

“In my experience, the level of anti-Semitism is the lowest in Europe,” he adds.

Davidzon’s experience is reflected in the robust tourist trade between Ukraine and Israel as growing numbers of Ukrainians and Israelis take advantage of visa-free travel between the two countries. Ukraine President Petro Poroshenko announced in September 2016 that this has led to a tenfold increase in tourist flow, with 137,000 Ukrainians visiting Israel last year alone. This cross-cultural pollination is evident in a number of bars and restaurants in the city center: From Allenby – an Israeli restaurant that draws its guests in with signs in Hebrew and English – to Dizyngoff, an ambitious Israeli-Parisian-Asian fusion restaurant that looks out to a monument of Catherine the Great. With offerings including smoked salmon and cucumber cheesecake, shiitake mushroom hummus, sea bass sashimi and baked snails, the menu doesn’t disappoint. A Russian inscription on the restaurant’s Facebook page reads “Dizyngoff – a part of Israel in the center of Odessa.”

Alexander Vlasopolov, 26, one of the restaurant’s four founders, had the idea after spending some time in Israel after a Birthright Jewish heritage trip. He is adamant that Dizyngoff is at heart a Tel Aviv restaurant, multicultural and multiethnic, with strong Jewish roots.
“Our restaurant is influenced by Jewish and Israeli culture, but we also wanted it to be fun and essentially Odessan,” Vlasopolov says. The beautiful young things imbibing the imaginatively named “Boker Tov” and “Damascus Gate” cocktails seem to agree.

Odessa may have given birth to Israeli cultural life, but in one of life’s many twists, it is now contemporary Israeli culture that is returning to the Black Sea.

The headline of the original story appeared as, “Tel Aviv on the Black Sea: Odessa, the Cradle of Israeli Culture, Enjoys a Jewish Renaissance.”