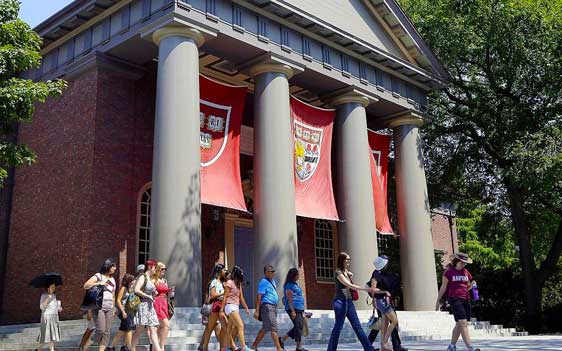 BOSTON — Back in the USSR, Ilya Shapiro’s parents had to fight anti-Semitism to be admitted into universities that discriminated against Jews. Fast forward several decades and legal activist Shapiro has taken on a similar cause in the United States, campaigning to abolish the use of race in the admissions process at Harvard University.

The admissions policy is the subject of a court case scheduled to be argued in a Federal District Court in Boston on October 15 — only this time, the alleged discrimination is against Asians, not Jews.

In recent months Shapiro, a senior fellow in constitutional studies at the Cato Institute in Washington, DC, has actively campaigned for the right of Asian-American applicants to be treated equally during the admissions process at Harvard.

He has written articles and was interviewed on America’s National Public Radio about how Harvard University discriminates against Asian-American applicants based on subjective criteria like “positive personality,” “likability,” “courage,” and “kindness.”

“It’s not that Asian students are [only] good at taking tests, and that they’re one-dimensional applicants, just academic. No. The information that’s coming out is showing that even if you take community service, leadership, essays and recommendations — Asian-Americans have done very well in those areas, too. But if you compare them to other ethnic groups, they are still let in at a much lesser rate,” Shapiro told The Times of Israel.

“What Harvard is doing is, they want a mix, they want a balance — and because so many Asian-American applicants are very qualified, they seem to be taking steps to restrict them in certain ways,” he said.

Shapiro was 4 years old when he left the Soviet Union with his family. His father Leonid Shapiro graduated from the Mendeleev Institute of Chemical Technology in Moscow, but did not receive the degree he’d originally set out to attain.

He had originally planned to study fuels, but instead ended up in the ceramics program. The fuels program, as he found out, did not accept Jews because the area of study was related to the development of explosives.

“I wanted to get into the fuels program, but I was refused. They told me I didn’t get enough points. Nobody would tell you that you wouldn’t be accepted because you’re Jewish, but it was a fact,” the elder Shapiro said. “Jews without someone’s [major intervention] wouldn’t get in.”

Up until the mid-1980s, Soviet universities had an unofficial quota system for Jewish students, which was analogous to the Jewish quota that existed in the Russian Empire, said Irina Shihova, curator of the Jewish Museum of Moldova, who holds a PhD in Jewish Heritage of Moldova.

That is why Jewish students often chose to apply to universities in regions that historically had fewer Jews — and therefore fewer students competing for the allotted Jewish spots, Shihova said. These included regions outside the Pale of Settlement, such as in Siberia or along the Volga river.

Shihova added that certain fields of study were particularly difficult for Jews to get into — specifically, fields related to the building of spacecraft, space exploration, and nuclear physics. Still, she said, some of the best Soviet scientists in these fields were Jews, so it is hard to make a clear-cut statement about these careers being totally closed off to Jewish applicants.

Leonid Shapiro said that it was also well known that the medical university in Kiev, Ukraine, was off-limits to Jews, as was the Moscow State Institute of International Relations.

Ilya Shapiro grew up hearing these stories from his parents.

“I remember them telling me, because I was interested in international affairs and politics, that for example the Moscow Institute of International Relations would not have been open to them,” Shapiro said. “Their options were limited in terms of what they could study, and therefore which university they could go to.”

Luckily, he did not face this type of discrimination when he applied to university in the US. Shapiro holds a Bachelor’s degree from Princeton, a Masters from the London School of Economics, and a law degree from the University of Chicago Law School.

Shapiro said that Jewish students in America today are given the same treatment as all white students — though this was not always the case.

Harvard University abolished its cap on Jewish applicants only in the 1960s, around the same time that America’s most well-known university finally started to admit women, Shapiro said.

Still, Harvard continues to use race in its admissions process as part of a nationwide affirmative action program that aims to help African-Americans and Hispanics be admitted into universities.

Harvard spokeswoman Rachael Dane explained that considering the race of applicants helps the university to have a diverse student body.

“Harvard’s lawful admissions policies consider many factors, including race, to evaluate each applicant as a whole person with the goal of seeking excellence, expanding opportunity, and bringing together profoundly different students to live with and learn from one another,” Dane told The Times of Israel in an email.

Harvard denies that the university discriminates against Asian-Americans. The percentage of Asian-Americans at Harvard has grown by 27 percent since 2010, and Asian-Americans comprise nearly 23% of the 2022 admitted class, Dane pointed out.

But from Shapiro’s point of view, considering the race of any applicant for the sake of diversity is wrong.

“At the same level of qualification, it’s easiest to get in if you are black, then Hispanic, then white, and then Asian,” he said. “In terms of morality, it’s bad, it’s wrong to cap people based on race or skin color.”

Now that conservative judge Brett Kavanaugh has been tapped by President Donald Trump to serve on the nation’s highest court, it is likely that the court will side with Students for Fair Admissions if the Harvard case goes to trial, Shapiro said. This could essentially put an end to affirmative action on the campuses of American universities, he said.

“When the Harvard case goes to the Supreme Court, that’s when there can be a significant change in the law,” Shapiro said.

by Julie Masis, Times of Israel

The headline of the original story appeared as, “Son of Russian-Jewish immigrants fights affirmative action on behalf of Asians.”