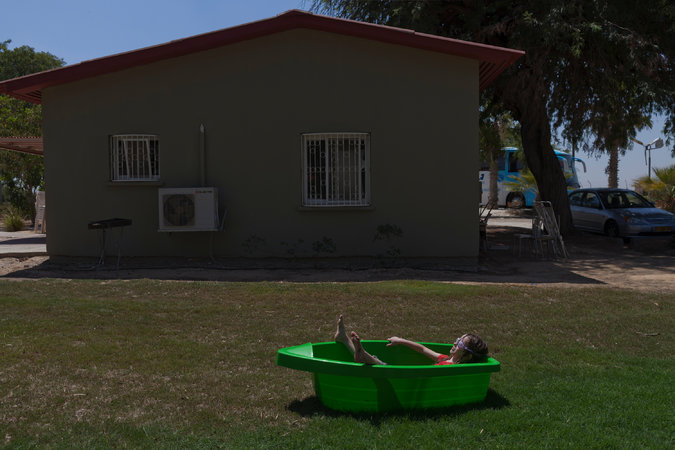 A girl from Kibbutz Nahal Oz played in a paddle pool in Urim, which is a short drive away but out of mortar range. Credit: Rina Castelnuovo for The New York Times

KIBBUTZ NAHAL OZ, Israel — Towering concrete walls surround the kindergarten in this rural Israeli community next to the border with Gaza, blocking out the light. The fortresslike panels went up a few days ago as protection against deadly shrapnel from the Palestinian mortar rounds that have crashed down here in recent weeks with a terrifying intensity.

On Wednesday, the day after an open-ended cease-fire took hold, the families with young children, who are the lifeblood of this farming village and who fled to safer parts of the country, had still not returned. Residents reached by telephone said they would likely return in the coming days, in time for the school year scheduled to begin on Monday.

But some parents of young children are questioning whether they want to continue living in Nahal Oz and in Israel’s traumatized south, where the once-revered Zionist ideal of settling the border areas is crumbling.

“This is a test for our community, but no less for our government,” said Daniel Rahamim, the crop irrigation manager of Nahal Oz and a member of the community’s emergency team. “Will our leaders know how to help lift us up? The big test comes once quiet prevails.” 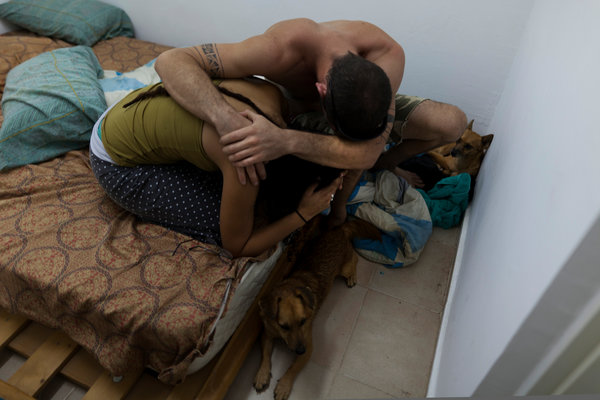 A wiry, soft-spoken man in work boots, Mr. Rahamim had shown reporters around the kibbutz earlier in the week, between mortar attacks. He was one of about 50 of the 350 residents — mostly older people and a few essential workers — who have remained here for most or all of the war.

“Whether we like it or not, the circumstances have imbued our lives with extra significance,” Mr. Rahamim said. Describing Nahal Oz, founded in the early 1950s, soon after the establishment of the state of Israel, as the first line of defense, he said that living here was again about “holding on to this place.”

Israel’s defense minister, Moshe Yaalon, spoke Wednesday in his first public remarks since the cease-fire about the hardships of bringing up children under fire in the area, saying, “This is a harsh reality to live in, and the difficult questions they now raise are correct and justified.”

The death last Friday of Daniel Tregerman, 4, was a seminal moment for some residents. Daniel was killed here when a mortar sent shrapnel flying into the living room of his family’s small stucco house. His family had ventured back during an earlier cease-fire that collapsed, after assurances from the military’s top brass that it was safe to return.

Two more Israeli civilians were killed on Tuesday when mortars crashed into a nearby community, Nirim, half an hour before the new cease-fire took effect.

This latest Gaza conflict, the third in less than six years, was the longest and deadliest for both sides. Gaza suffered most of the casualties, with more than 2,100 Palestinians killed in Israeli strikes, while 64 Israeli soldiers and six civilians died.

Local leaders criticized Prime Minister Benjamin Netanyahu for accepting a truce similar to one that ended eight days of fighting in 2012, which brought only 19 months of quiet. Critics said the countdown had already started toward the next round.

Hamas sent longer-range rockets into Israel, almost as far north as Haifa, but in the south, where thousands of rockets paralyzed life and the local economy, residents bore the psychological brunt.

Though the physical damage from rockets was minimized by Israel’s Iron Dome antimissile defense system, there is no technological solution yet for the short-range mortars that took a much heavier toll on soldiers and civilians. Though relatively primitive weapons, the mortars now pose an existential threat to communities like Nahal Oz, closest to the border fence.

From the kibbutz’s cowshed there is a clear view of Shejaiya, the Gaza neighborhood where some of the fiercest fighting took place in July. Hamas militants emerged from a tunnel and killed five soldiers at a nearby army post. Leaflets dropped over Gaza by Israeli military aircraft warning Palestinian residents to evacuate areas where Hamas was operating landed inside the kibbutz.

Adi Freibach, 42, a mother of five, has lived at Nahal Oz since she was a child. She and her family spent this week with 25 other families from Nahal Oz at Kibbutz Urim, safely out of mortar range. For the first time, she said, she was contemplating the possibility of moving away from Nahal Oz, but said her family had decided this was not the time to make decisions.

“It doesn’t only depend on our feeling,” she said, “but on what happens around us. If others leave and the children’s friends leave, we have nothing to stay for.”

Moran Freibach, 44, Ms. Freibach’s husband, was born in Nahal Oz. He said that if the kibbutz were to collapse, it would be “the beginning of the end of the Zionist dream.” He added, “If we cannot feel safe there, why should we feel safe anywhere in Israel?”

Nahal Oz was etched in Israelis’ memory after one of its members, Roy Rotenberg, was killed in a cross-border ambush in 1956. Moshe Dayan, then the army chief of staff, delivered a eulogy at his funeral that became one of his most acclaimed pieces of oratory.

“Have we forgotten that this group of young people dwelling at Nahal Oz is bearing the heavy gates of Gaza on its shoulders?” he asked. “Let us make our reckoning with ourselves today. We are a generation of settlement, and without the steel helmet and the gun’s muzzle, we will not be able to plant a tree and build a house.”

When Yair Lapid, the finance minister, visited Nahal Oz on Monday, a day before the cease-fire, those who remained in the kibbutz gathered with him in the “war room,” a fortified underground shelter. They asked Mr. Lapid for financial incentives to entice students to rent here; for help to cover special educational and social needs; for assurances that it is worth investing in a fortified roof for the dairy and that people would still want to buy the new houses that were built over the past year as part of a plan to encourage demographic growth. Mostly, they wanted to hear if Nahal Oz had a future.

Mr. Lapid listened but had no immediate answers.

Ilan Zamir, 29, who works in the dairy and the chicken coops, said that day: “Someone has to stay here. I don’t want it to be a ghost kibbutz.”

Holding the tail of a mortar shell that crashed into a eucalyptus tree not far from his house, he added: “If rent is cheap, people will come. Between the wars, it is the most beautiful place in the world.”