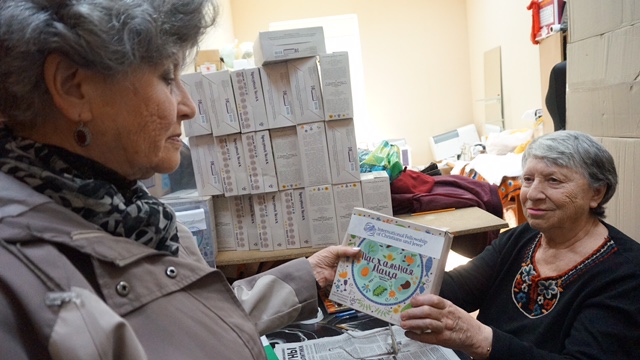 When Nadya B. was a young girl in Odessa, she celebrated Passover with her Yiddish-speaking grandparents whom she lived with at the time. She fondly remembers the traditions – the Seder, the stories, the time with family. But that was before the Communist regime in the Soviet Union cracked down on religion, before she got older and started to experience health challenges, and before the current crisis in Ukraine.

Nadya still lives in Odessa and suffers from severe heart disease, living on a pension of only $44 per month. Throughout the year, she receives critical assistance through the IFCJ Food and Medicine Lifeline, JDC’s operational partnership with the International Fellowship of Christians and Jews (IFCJ).

At a time of year that might otherwise be marred by the loneliness of aging and poverty, Nadya and thousands like her across the former Soviet Union are this year commemorating Passover with the delivery of boxes of matzah and traditional Passover fare, and festivities at JDC-supported Hesed social welfare centers. Elderly Jews across the former Soviet Union have the opportunity to gather with their communities and celebrate a holiday that allows us to unite around a shared table and tell the story of the Jewish people’s escape from slavery in Egypt.

This year in preparation for the holiday, JDC delivered more than 50,000 boxes of matzah through our partnership with the Claims Conference, and through the IFCJ Food and Medicine Lifeline.

Those who received the boxes of matzah are people who survived Communist oppression and in many cases the Holocaust, and are now living in abject poverty as they struggle to meet their most basic needs, including securing the food and medicine required simply to survive. While many of our families join fellow Jews around the world in clearing our kitchens of bread and filling them with kosher for Passover ingredients, those in the FSU will continue to struggle to put any kind of food on the table.

For more than 100 years, Federation and JDC have saved Jewish lives and built Jewish communities. Day by day, Jews in the former Soviet Union, with the help of JDC and our partners, are reinventing Jewish life that is grounded in both material security and a vibrant Jewish identity – in a part of the world where it was once nearly extinguished by the Holocaust and Communist-era religious repression.

This is what you make possible.