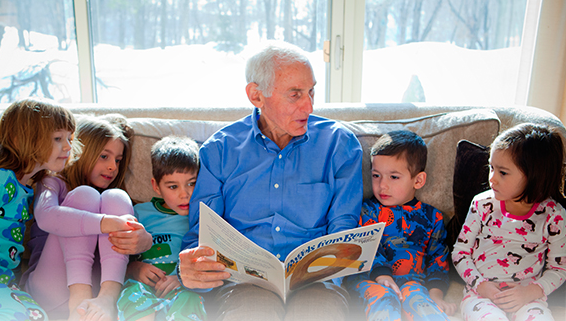 Harold Grinspoon, founder of PJ Library, real estate entrepreneur, and philanthropist, signed the Giving Pledge to donate more than half his fortune to charitable causes. The Giving Pledge is an international program started in 2010 by billionaires Warren Buffet and Bill and Melinda Gates, which includes business leaders like Richard Branson, Elon Musk and San Diego’s own Joan and Irwin Jacobs.

According to an interview Grinspoon gave to the New York Times in 2011, the philanthropist says he was worth “over $500 million.”

“The sense of mission and accomplishment that I get through my philanthropy energizes me every day,” Grinspoon, 85, said in a statement released last year by the Harold Grinspoon Foundation. “I am honored to join the Giving Pledge and encourage others to join as well.”

In addition to funding half the PJ Library’s budget, the Harold Grinspoon Foundation donates to the Jewish Federations of North America, the Foundation for Jewish Camp, the Birthright Israel Foundation and several other Jewish organizations. His generosity is an integral part of many of the programs we run at the San Diego Federation.

“In the 21st century, I believe that for Judaism to continue to have an impact on families and society, Jewish living and learning must be actively cultivated,” Grinspoon said in his statement. “That is why I am committing nearly all my assets to my Foundation to pursue this goal.”