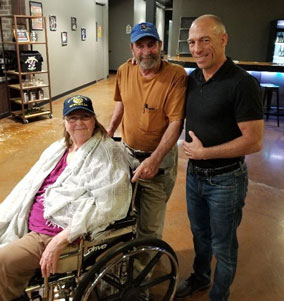 It was Tuesday, October 30th when I initially wrote this column. Three days after the horrific shooting of 11 Jews in Pittsburgh, strictly because they were Jewish. In those three days, I experienced just how vulnerable we all are to bigotry, ignorance, and violence.

Our security as Jews in America has been threatened, countered by the incredible outpouring of outrage and support from all corners of our society. The unity demonstrated to defeat hatred fortifies my confidence in the human spirit – in the face of evil. The stories abound. From the vigil at Congregation Beth Israel on Monday night (thank you, Tammy and ADL!) to my neighbor, a former San Diego Police Officer, coming into my home, in tears, to express his sadness at our loss – all of our loss, I am overwhelmed.

As I write today, financial support from every sector of our multicultural society has generously flowed into Pittsburgh, as much a demonstration of solidarity as an expression of economic assistance. These funds will not bring back the dead nor erase the evil that one person perpetrated. He was one, but he is not alone. I can only hope that the children, brothers, sisters, friends, and neighbors of the victims gain some solace from the love.

On Tuesday, I attended a “Table Captain’s Event” at a local brewery (Alesmith – it is AWESOME). The table captains are for the Federation’s Men’s Event, one of the signature gatherings of almost 1,000 San Diego Jewish men (and non-Jewish and a few women). As important as the Men’s Event is to Federation, the need to come together for comfort and strength amplifies the centrality of this year’s gathering. In the face of bigotry, we must demonstrate our unity as a community, be it at Men’s Event, a Shabbat service or any other expression you deem fit.

But, the event on Tuesday impacted me differently. Overwhelmingly so.

Monday’s vigil with over 3,000 people from every corner of the community. Donors opening their wallets, as we do whenever the need arises. Daily stories of acts of kindness and support.

And then this. At the event on Tuesday, we had a room segregated from the rest of the building. We socialized. We pontificated. We hung out. On the way toward the exit, Michaels Jeser (Federation CEO) and Hopkins (Jewish Family Service CEO) directed my attention to a couple. They were not part of our group nor within earshot of our event. But they heard that there was a Jewish organization in the other room. I don’t know them. They don’t know us. I will likely never get to know them. Yet, I will never forget them. Upon learning about the Jewish event in the other room, they got word to us that they wanted to make a donation. Ten dollars. Ten dollars!!!! If ever there was an example of the virtue and impact of tzedakah, this was it. Their generosity of spirit and love for man was… well… overwhelming. I don’t know their names. I thank them from the bottom of our hearts for reinforcing my faith in our fellow man. Overwhelming.

I hope to see many of you at our Men’s Event on November 29th. More than a shameless plug, I do sincerely look forward to spending time in a room with fellow Jews (and non-Jews) to demonstrate our strength and pride in being Jewish, just for being Jewish.