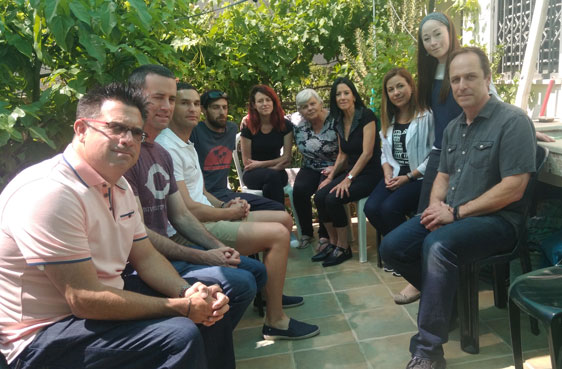 Pictured: The Feder family with the delegation from San Diego

It has been a turbulent few weeks here in Israel. We have gone from Holocaust Remembrance Day, to facing a new wave of rocket attacks hitting communities in southern Israel. We stood together in grief as we commemorated Israel’s fallen during Yom Hazikaron, and celebrated Israel’s independence with the smells of barbecuing throughout the country on Yom Haatzmaut.

The intense highs and lows that we experienced were by no means limited to Israel. More than in previous years, the entire Jewish world seemed united in grief. Together, we felt the wrenching pain of loss, mourning our brothers and sisters from Pittsburgh and San Diego, as well as from Israel who were taken from this world prematurely.

[The Jewish Agency’s Masa program is the leader in immersive international experiences in Israel for young adults (18-30), offering over 250 tracks for some 12,000 participants each year].

In attendance were 4,000 Masa participants from around the world, 1,000 global Jewish community leaders from Federations, synagogues, schools, government officials, and families of fallen soldiers and victims of terror.

The Chairman of The Jewish Agency, Isaac Herzog, delivered a powerful speech of unity and Jewish peoplehood:

“Today we mourn together with the families of Moshe Agadi, Ziad Alhamada, Pinchas Menachem and Moshe Feder, z”l, who lost their loved ones to murderous terror from Gaza this week.

Four people who connect the wondrous mosaic of the people of Israel – Bedouin, ultra-Orthodox, a Jewish immigrant from Iran, an Israeli scientist and the partner of an Israel Air Force widow, now widowed again.

The longing for those who’ve been taken from us far too soon, for their smile, their laughter, their embrace. These are the fragments of memory that can never be put back together. We long for our loved ones who fell in battle, and for those who were the victims of terror and anti-Semitic hate, In Israel, San Diego, Pittsburgh, Paris and around the world, we can never put the fragments back together but we can renew our resolve to cherish their memory, and honor their legacy.”

Just a few days later, Federation’s incoming Board Chair, David Bramzon, joined Raquel, Gary, Cliff and Samantha to deliver checks to the bereaved family members of Moshe Feder, on behalf of the Fund for Victims of Terror.

Moshe Feder was killed on his way to work when an anti-tank guided missile struck his car near Sderot. He is survived by two children and his partner Iris Eden. Iris lost her first husband, Yashish Eden, in a deadly helicopter crash in 1997 that saw 73 IDF servicemen lose their lives when two aircraft collided near the northern border with Lebanon.

There was a remarkable show of warmth and solidarity between strangers from such distant communities. Although brought together by tragedy, each individual expressed their determination to bring more light into the world. It was an honor and a privilege to share in this experience.

Sadly, San Diego is no stranger to the continued threats facing Israel. The 21-year-strong partnership with Shaar Hanegev has seen countless families in the region suffer as a result of the ongoing conflict with Gaza. However, the support of the San Diego community, both through philanthropy and people-to-people relationships, has contributed so significantly to their resilience.

The unique collaboration between The Jewish Agency and the Jewish Federation of San Diego County is what makes all of this possible. The very existence of programs such as Masa, and our ability to provide critical assistance for victims of terror could not be done without the support of our global Jewish family. Our hearts beat as one.

by Samantha Robinson, The Jewish Agency for Israel