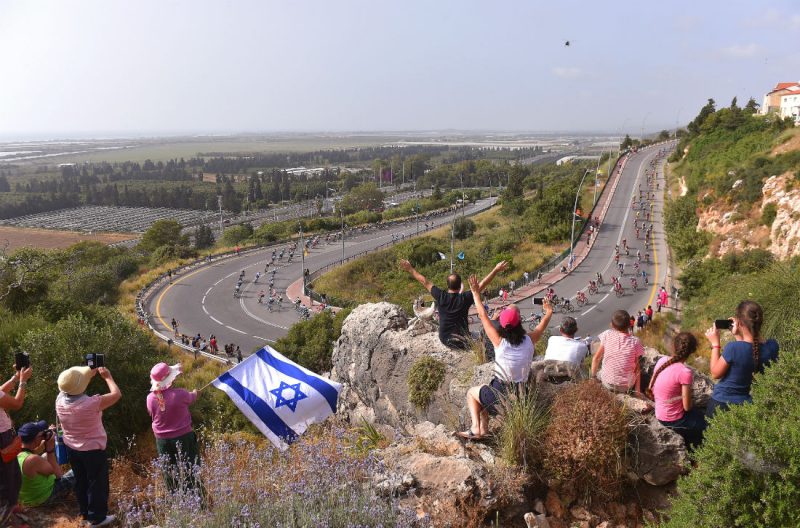 The picturesque landscapes of Israel were on full display during stage 2 of the Giro d'Italia. Photo: Tim de Waele/Getty Images

They did it under a white pop-up tent in a parking lot. And it was all right in public view. Why? No team buses.

For teams like Dimension Data, the historic first grand tour excursion beyond the European realm required everyone to do things a little bit differently.

Most of the pre-stage rituals and preparations are usually done behind the tinted glasses of racing team’s well-equipped buses. With the 2018 Giro starting in Israel, team buses were left at home.

The decision to bring the season’s first grand tour to Israel was fraught with logistical and organizational hurdles.

Work on the project began months ago. Teams, riders, RCS organizers, and Israeli officials had months to hash out a plan for what is arguably grand tour stage racing’s most ambitious project ever.

Grand tours have started far from their host nation before — think Denmark and the 2012 Giro or Ireland and the 1998 Tour de France — and transfers have often involved flights.

What was different about Israel is that it was outside of Europe — some non-European riders required visas — and further away than any grand tour has ventured before.

Essentially, this is a Giro of two organizational parts. There was the Israeli team and the second Sicilian team.

“We are using the same support staff for the entire Giro,” Sans Vega said Sunday. “But we do have staffers waiting for us in Sicily with our buses, team cars and other equipment that we didn’t bring to Israel. It was a big operation to organize everything.”

No team brought their team buses or fleet of vehicles from Europe, though Israel Cycling Academy had a local team bus at their beck and call. Instead, Israelis provided passenger vans, team cars and small cargo vans to move around the entourage.

Teams sent digital images of their team branding, and organizers stickered up each team according to their individual designs. It was as close as they could get to the real thing.

Most of the technical equipment was flown to Israel last week from Milan in a 747-cargo flight. Half of the plane was for the teams, while RCS Sport filled the other half with all their start and finish-line materials, including podiums, banners, VIP tents, and other equipment. It was a military-like operation that went off pretty well.

Each team was allowed one big container box on the cargo plane. Dimension Data stuffed it full of three bikes per rider — one-time trial frame and two road frames — as well as wheels, tires, helmets, shoes, clothes, and everything else needed to race. Every item, from the bikes down to the last screwdriver, had to be registered, valued, and cataloged with Israeli customs offices.

The cargo was loaded up in Milan and made the 2,700km flight from Italy to Tel Aviv last week. On Monday, everything will be packed back into the plane for the 2,000km flight from Eilat to Catania on Sicily.

Teams brought the minimum. Instead of two types of helmets, for example, Dimension Data only brought their aero helmets. Riders only had one spare bike, instead of the standard two for stage races. They also brought their full time trial set-ups with aero frames, wheels and handlebars, making things that much more complicated for mechanics to build up the bikes and tear them down again in Israel.

Just about everything else riders needed — from tents, umbrellas and tables to seats, coolers and towels — were locally sourced.

“We brought the minimum,” Sans Vega said. “We had no real problems. The Israelis set up all of the vehicles and other equipment we needed. Everything was very well organized.”

The other half of the Giro entourage is already in Sicily. Dimension Data sent its team buses, mechanic’s trucks and chef equipment straight from the Tour de Romandie to Sicily. They are all waiting on the Italian island for the riders and staff to arrive Monday morning.

A first wave of RCS operational staff already flew from Israel to Italy overnight following Sunday’s start. The riders, support staff, race caravan officials and even the odd journalist will fly to Sicily on Monday morning.

While it still remains to be seen if there are any last-minute glitches on the Monday transfer, so far it seems everything has gone off without a hitch.

The large-scale transfer was an important litmus test for RCS Sport, which is ambitious in its plans to take the Giro even further afield in the future. The race has pondered “Big Start” events in such far-flung places as the United States, Japan, and other spots in the Middle East.

“It generates quite a bit a stress for the riders and staff to make such long trips,” Sans Vega said. “It’s worth it when you see the fans and how well the race turned out in the end.”

Even the podium girl presence was light. Only four flew to Israel. Twelve more are waiting in Sicily. That’s where the “real” Giro will begin back on home soil with Tuesday’s fourth stage.

By Andrew Hood for Velonews