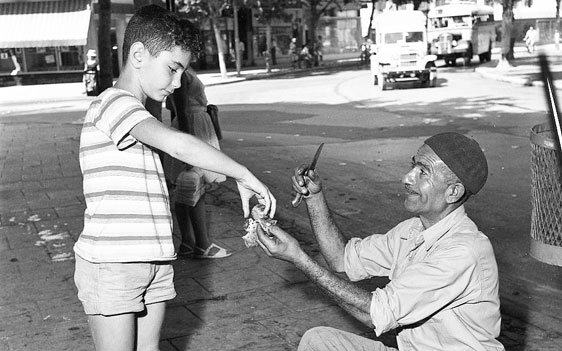 A man selling sabras on the street in the 1950s. (Efraim Ilani)

RHINEBECK, New York — Click. Jerusalem Mayor Teddy Kollek smiling and kneeling next to Marlene Dietrich. Ezer Weizman, his wife Re’uma and son Saul sitting around the dinner table. Snap. The opening of the road from Beersheba to Sodom in 1950. Click.

For more than 40 years Efraim Ilani worked as a press photographer in Israel, documenting its development from pioneer state to burgeoning economic and military dynamo. He captured the faces of the first immigrants released from detention camps in Cyprus and covered female soldiers in training in the 1960s. He covered the opening of power stations and the development of ports along the coast.

All the while, as Ilani bore witness to Israel’s progress from behind the lens, his son Peter often accompanied him on assignments, snapping away with a Yashica Matt, his very first camera.

“I still think about what he taught me, ‘If you don’t see a story in your frame don’t take a picture,’” Peter Ilani said, gesturing to his father’s vast collection, now neatly stored in the basement of his upstate New York home.

Ilani, who now works in real estate, recently finished cataloging almost all of his father’s black and white negatives and proofs. A herculean task given that there are over 5,700 negatives, 1,700 of which the younger Ilani has scanned. The collection includes thousands of color slides, not cataloged, and close to 200 black and white prints his father made in his lab years ago.

While many of the photographs are in the JNF archive and private collections, the younger Ilani is hoping for someone to buy the archive, which is in excellent condition.

“I would like to sell it as a whole with the idea that the public has access to it,” he said.

A 2006 visit to the Israel Museum inspired Peter to start cataloging his father’s work. He was in the gift shop thumbing through a book “100 Years of Photography in Israel” when he saw a couple of his father’s photos.

The Israel Museum, which is interested in the collection, is hoping a donor will contribute to its purchase, said Yudit Caplan, the museum’s head of photographic estates collections and associate curator, in the department of photography.

Behind the lens
Born in 1910 in Stuttgart, Germany, as a youth Ilani worked in the Agfa camera factory in Munich. There he got his first camera and began studying photography.

In 1933 he actually joined the Nazi party to make sure he wouldn’t lose his job, hiding his Jewish religion. A year later, Ilani’s supervisor passed along a message — the Gestapo was looking for him, they believed he was Jewish.

“I don’t know if you are Jewish,” he told Ilani, “but if you are, you should leave.”

Ilani never returned to Agfa, but before leaving Germany he made a final visit to Stuttgart where he asked his father to also flee to the Holy Land with his younger brother Benny.

Ilani’s father said he’d come just as soon as Benny finished high school. It was not to be: his father and brother were arrested and sent to concentration camps. Ilani’s father didn’t survive, but after spending four years in the camps Benny was able to escape into Switzerland.

Meanwhile the 24-year-old Ilani immigrated to what was then Palestine, learned Hebrew and joined the Haganah, which directed the photographer to enlist in the British Mandatory Police Force and work undercover. He did so for 12 years. Upon leaving the force, they offered him British citizenship — which he declined — and his pistol — which he kept.

In 1946 the Haganah called on him to document many events on the eve of Israel’s independence. He captured the riots following the approval of the UN Partition Plan in December 1947, and the burning of Jerusalem’s commercial center. He photographed the 1948 bombing on Ben Yehuda Street and the Jewish Agency Building. And he witnessed the evacuation of British “Bevingrad” in Jerusalem in 1947, and the last British convoy to leave in April 1948.

Decades of documentation
After the state of Israel was established Ilani worked as a press photographer for United Press International. Over the years many of his photographs graced the covers of several magazines, including “Look” and “Life.”

In 1951 he became official photographer for State of Israel Bonds and began shooting the country’s economic development. He trained his lens on factory workers and farmers, road openings and mining operations.

And along the way he snapped away at politicians and ordinary citizens.

“Ben-Gurion or the guy sweeping Mahane Yehuda, he gave them the same attention, he treated them the same,” Peter said.

The Israel Museum’s Caplan said Ilani’s photographs are an important part of the documentation of the Zionist enterprise and developing society.

“Ilani preferred instead to document the monuments, to concentrate on documenting the faces of the participants and the workers in their work and the establishment of their settlements, and at the same time was known [for] the photographs of Israeli politicians. His photographs knew how to combine sensitivity and deep observation into the recorded photograph and even add a light humor to them,” Caplan told The Times of Israel in an email.

Later, the Shin Bet and then the Mossad tapped Ilani. He was sent to Argentina where he participated in the surveillance and capture of Adolf Eichmann, Caplan said. Some of the activities Ilani participated in are still classified.

Some years ago Peter recalled watching a documentary on Eichmann’s capture. A photographer named Efraim Ilani was mentioned. Peter called his father, who refused to confirm involvement in the operation, he said.

When Peter was growing up, the family lived in Jerusalem and was one of the few to own a car and a phone, both necessary tools for Ilani. Throughout his career he did much of his own laboratory work, keeping a darkroom in his house.

Although he retired in 1977, he didn’t put down his camera. One of his last projects was an album of self-portraits.

“He was an artist in the lab. He would be amazed at how much you can manipulate with new technology – change the color, change the shadows,” Peter said.

Ilani died on Yom Kippur in 1999 at the age of 89. A car struck him while he was crossing the street in a crosswalk after services ended.

For Peter Ilani, his father’s legacy is twofold.

“He left his history behind and the history of Israel, but for me, to get his attention I had to learn photography. The photography put us together,” he said.

(The headline of the original story appeared as, "New exposure needed for photographer of Israel’s birth and Eichmann’s capture")