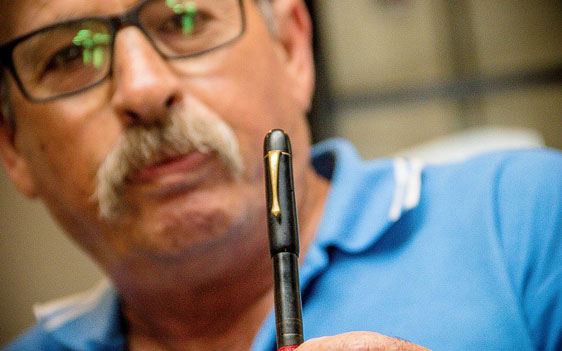 Yaron Roksa holds pen confiscated by the Nazis from his father at Neuengamme concentration camp in 1944. The pen was returned to the Roksa family by ITS on July 3, 2018. (Laura Ben-David/Courtesy of ITS)

When Hungarian-Jewish teenager Istvan Rokza arrived at the Neuengamme concentration camp in northern Germany in late 1944, he had very little on him – only 20 pengo (then the Hungarian currency) and a “Tintenkuli,” a black stylograph-type pen. The Nazis confiscated these from Rokza, placing them in an envelope and listing the contents on the outside.

Rokza survived the war, but died in 1996 without ever seeing the money or pen again. Infinitely worse, he was never reunited with his mother Hedwig (Miriam), father Anton (Shlomo) and older brother Gyorgy.

He also never learned their fates. He had heard a rumor that perhaps his brother had returned to Budapest after the war, but for all intents and purposes, Rokza believed he was alone in the world.

Rokza moved on with his life, immigrating to Israel in mid-1949 and rarely speaking of his wartime experiences. However, unbeknownst to the Holocaust survivor, his pen had remained intact in Germany. It was one of thousands of confiscated personal belongings recovered by Allied forces at the Gestapo headquarters in Hamburg, or at the Neuengamme, Dachau and Bergen-Belsen concentration camps as they liberated Europe. These items were deposited with various archives and restitution organizations in Germany.

This month, 22 years after Rokza’s death, his pen was returned to his family in Israel thanks to the joint efforts of the International Tracing Service (ITS) and this Times of Israel reporter.

In 1963, the German government transferred some 4,500 envelopes containing confiscated items to the ITS, a massive archive containing a staggering amount of material, most of it collected by Allied forces as they liberated Europe, beginning in 1943. Located in Bad Arolsen, Germany, it is a complex of six buildings filled from floor to ceiling with 30 million original documents relating to the fates of 17.5 million victims of Nazi persecution. Since the war – and especially in its immediate aftermath – the institution’s primary purpose has been to trace the fates of these people.

Between 1963 and 2015, roughly 1,500 items were either successfully returned by ITS directly to owners, or were given to Red Cross societies operating behind the Iron Curtain in hopes that they could help in the effort.

An article I wrote for The Times of Israel last February about ITS’s new #StolenMemory campaign to restitute the remaining 3,000 items led me to play a role in returning Rokza’s pen to his eldest son Yaron and the rest of the large family that Rokza established here in Israel.

“I can’t express what it means to me to have this pen,” Yaron Roksa said as ITS director Floriane Hohenberg handed it to him in an intimate ceremony in the lounge of a hotel in Jaffa on July 3.

According to Hohenberg, 164 of the remaining 3,000 items have been returned since November 2016. Six ITS staff members assigned exclusively to this project continue to work on giving back the remaining objects.

“We have names associated with all the objects, but for 950 of them, we still don’t know the country of origin of the original owner,” Hohenberg said.

Of the thousands of personal effects, only a handful are known to have belonged to Jews. And among those, only Rokza was believed to have ended up in Israel.

This is where I got involved: Hohenberg recently contacted me and asked me to see if I could find Rokza or his family. There was no confirmation that Rokza had actually immigrated to Israel or remained here. The only thing I had to go on was an International Refugee Organization document from Austria dated June 1949 stating that assistance to Istvan Rokza was being discontinued. The stated reason was “ISR,” which presumably meant that he was poised to immigrate to Israel.

ITS emailed me a file with all the documents they had gathered on Rokza and his Tintenkuli pen. I reviewed the documents carefully and summarized all the relevant information that might help me locate the Holocaust survivor:
• His name on wartime and post-war records appears as ISTVÁN ROKZA/ ROXA/ ROKSZA (different spellings of the family name).
• He was born May 10, 1928, in Budapest, Hungary, to parents Anton Roksza and Hedwig Füllöp.
• He listed on his Displaced Person (DP) registration card that he had been learning the bicycle repair trade in Budapest before being deported.
• At age 16, he was deported in late 1944 to the Neuengamme concentration camp. He was later transported with other Jewish inmates to Bergen-Belsen, which was liberated on April 15, 1945, by British forces.
• He was released from the Bergen-Belsen hospital set up by the Allies on July 15, 1945.
• On July 17, 1945, he was evacuated to Sweden on the “Prins Carl” ship.
• Documentation from the ADC/Joint shows that he was still in Sweden in November 1947.
• Documents from June 1949 indicate that he was by that time at the Beth Bialik DP Camp in Sazlburg, Austria and a farm worker (presumably preparing for aliyah to Israel).
I conducted research and networked with anyone I could think of who could help me, from journalists to historians to genealogists. And this being the age of social media, I also checked Facebook. I even reached out to the Fountain Pen Hospital in New York to learn more about the pen itself.
A contact who used to work at Yad Vashem suggested I inquire at the Museum of Hungarian Speaking Jewry in Safed. Staff there told me that the surname Rokza was very rare among Hungarian Jews and that they were unaware of anyone with it in Israel, which made me suspect that Rokza might have Hebraicized his name. That would obviously make finding him and his descendants a lot harder.

The museum staff did, however, provide me with a page from a document titled, “Counted Remnant: Register of the Jewish Survivors in Budapest,” published by the Hungarian Section of the World Jewish Congress in 1946. Rokza’s older brother Gyorgy appears on the list. It seems that Rokza’s suspicion about his brother’s whereabouts was true.

In the end, an Israeli genealogist named Jules Feldman determined for me that Rokza did make aliyah, and lived out his life in Israel, by looking up genealogical records using Rokza’s birth date and approximate date of immigration. The catch was that there was no Istvan Rokza, only a Yosef Roksa – but my guess, based on identical birth dates, was that this was the same person.

After some trial and error with phone numbers, I eventually reached Yuval Roksa, one of Rokza’s grandsons. He led me to Rokza’s eldest son Yaron, who lives in Kiryat Shemona.

“I was in shock when I got your call,” an emotional Yaron Roksa, 61, told me when we met, along with Hohenberg, on July 3. Roksa also brought along his brother-in-law Dan Kabilo and his nephew Ravid Kabilo.

Roksa said that his father, otherwise a habitual storyteller, had not only refused to speak of his wartime experiences, but also never sought recognition or reparations as a Holocaust survivor because he did not have a number tattooed on his arm.

Hohenberg brought along to the restitution meeting a file with high-resolution copies of all the ITS documents on Rokza and reviewed them with his son. He was surprised to learn even the basics, such as his grandparents’ names. He also had been unaware that Yosef, who worked in agriculture and as a truck driver until retiring, had ever been called Istvan.

Roksa was surprised to see documents showing that a German lawyer had corresponded with ITS on behalf of Istvan Rokza/Yosef Roksa in 1957 seeking evidence to support a case for reparations.

“I had no idea about this. He certainly never got any money,” Roksa said.

Hohenberg also had documents indicating that Istvan Rokza had been imprisoned in Hungarian labor camps before being transferred to Neuengamme.

“My father was missing the fingers on his right hand. He always said that he lost them when he was pushed into a saw when he was forced to work in carpentry. So this information about the Hungarian labor camps makes sense,” Yaron Roksa said.

The disability never prevented his active father from doing things.

“He wrote with his right hand, and he was athletic. He liked sports like boxing, running and soccer – and he was the Israeli ping pong champion when he was young,” Roksa said.

Roksa said he looked forward to sharing what he has learned about his late father with his 90-year-old mother Sarah, a Romanian Holocaust survivor, and the rest of the family. Yosef Roksa leaves a legacy of five children, 19 grandchildren and 23 great-grandchildren to date.

The family may be even larger if Gyorgy Rokza or his descendants can be located. Yaron Roksa has asked ITS to search for them.

The pen is being given to grandson Ravid Kabilo, 21, for safe keeping. He said he will frame it and hang it on the wall.

“I am glad we were able to bring some closure to this family. Knowing that the grandson will keep the pen and tell the story is keeping the memory alive for future generations,” Hohenberg said.

by Renee Ghert-Zand, Times of Israel