The Zionist Organization of America (ZOA) will honor one of San Diego's top pro-Israel students at its upcoming prestigious award dinner in New York City on November 20.

Adina Wollner, a Zionist student leader at UC San Diego and Soille Hebrew Day School alum, will receive the Myron Zimmerman Award for Outstanding Student Activism at this year's Justice Louis D. Brandeis Award Dinner on Sunday, November 20th. She will be honored for her service to the State of Israel both as a lone soldier in the IDF and as a student activist fighting for Israel on campus.

Wollner will share the stage with some of the most prominent pro-Israel figures in the world. Some of the other award recipients include the Honorable Danny Danon (Israel's ambassador to the UN), Congressman Ed Royce (Chairman of the House Foreign Affairs Committee), Harvard professor and author Alan Dershowitz, and Home Depot Co-Founder Bernie Marcus. Philanthropists Dr. Miriam and Sheldon Adelson will also be in attendance and presenting one of the awards. 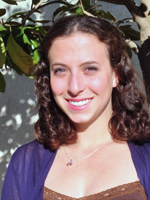 “Adina has distinguished herself as an heroic young lady, proud of her strong Jewish identity and deep connection to Israel and the Jewish People,” noted Rabbi Simcha Weiser, Head of School at Soille San Diego Hebrew Day School. “She sets a great example for the American Jewish community, giving us hope that the dire predictions in the Pew Survey can be overcome through strong family involvement and effective Day School education.”

Wollner has led the pro-Israel efforts for years in San Diego at a turbulent school toward Jewish and Zionist students in the country. UC San Diego is known for its anti-Semitic activities perpetrated by "Students for Justice in Palestine" (SJP), a student group that calls for the destruction of the world's only Jewish state. She worked with ZOA Campus and other pro-Israel organizations to combat the SJP and make UC San Diego a safer place for Jewish and pro-Israel students.

Wollner also attended the ZOA Student Leadership Mission to Israel, a two-week educational and advocacy mission that takes students across Israel, including Judea and Samaria (the West Bank), to train them to become more effective Zionist activists on campus.

The ZOA gathers every November for its award dinner in New York to celebrate the pro-Israel community and those leading the fight for Zionism and Israel.