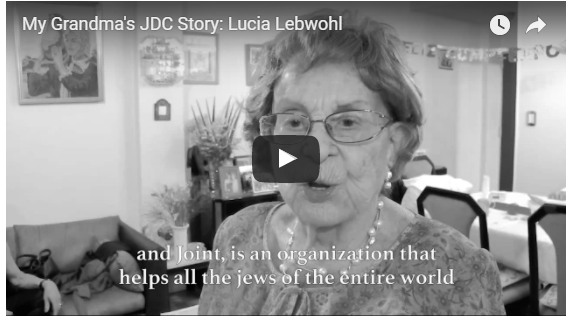 I came to New York City seven years ago after winning the green card lottery, a very different migration than the one my grandmother survived after World War II.

As I was studying photography at the International Center of Photography, I met an American Jewish woman named Nancy Borowick who introduced me to JDC, asking me to photograph one of their events. I soon realized I’d heard the name “Joint” before, so I went to ask my mother, who told me my grandmother had mentioned it in her memoirs. I found out that JDC, the Joint, had helped my grandmother while she was in a refugee camp in Ainring bei Freilassing, where my mom was born.

I was inspired by my family’s history and asked my grandmother to tell a small piece of her story, the video above.

My grandmother is my role model, my biggest inspiration, the person who I look up to for her strength, her positivity, her generosity, her joy to live, and the love she always showed me and everyone in my family and outside of it as well.

And I’m grateful to JDC for having such an important mission and working hard to help Jews around the world like, once upon a time, my grandmother.

Your generosity makes all of this possible!