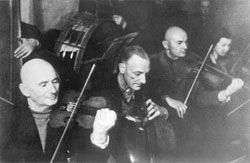 We are proud to partner with World Ort, a global leader in Jewish Education. Did you know they are also at the forefront of public Holocaust education? They recently launched a website exploring the little-known relationship between the Holocaust and music.

From Hitler’s rise to power in 1933 until the liberation in 1945, music played an integral role in daily life under Nazism. Explore the website to learn about diverse composers and music, including those who supported the Nazis and those who became their victims. Visit the music page for a wide range of sound recordings of music and songs, or explore musical life in ghettos and camps across Europe using their interactive map.

Visit Music and the Holocaust to listen and learn more.