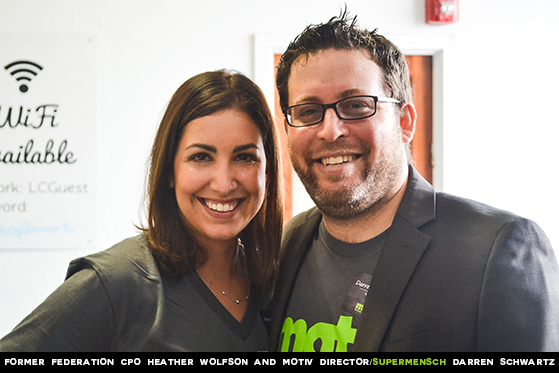 “We chose Darren as the Consensus Organizer of the Year due to his efforts to create innovative partnerships between Motiv San Diego, local youth, and the Jewish Community,” said Jennifer Cosio, executive director of SDSU’s Consensus Organizing Center.

“He has been working with youth for many years and he knew he could take this initiative one step further,” Cosio explained. “As a result, he hired the COC to train him and his colleagues on Consensus Organizing. Since the trainings, his work with youth and newly acquired Consensus Organizing skills has created a firestorm of organizations in the Jewish community wanting to acquire the same skills Darren is modeling.”

Schwartz is a San Diego native with a background in public policy, philanthropy and Jewish teen engagement. He was named director of Motiv in 2015.

“What makes consensus organizing so impactful is the sharing of power,” Schwartz explained. “By working as a coalition, not in silos, we will have long-term impact on young people in San Diego dedicated to community service and repairing the world.”

Caryn Viterbi, Motiv advisory council co-chair, congratulated Schwartz on the award. “We’re proud that our Director Darren Schwartz was recognized with this honor,” Viterbi said. “It reflects his significant impact, through his strength of leadership and his desire to work collaboratively, in our community to ensure our teens are meaningfully engaged in our community.”

Last year, Schwartz organized a successful Teen Service Summit held at SDSU. Hundreds of teens participated in the one day event that included workshops teaching teenagers how their skills and passion can be applied to volunteer service. The 2017 service summit renamed Motiv8 will be held Sunday, Oct. 22 with more details to come.

About Motiv
Motiv San Diego connects high school teens of all backgrounds to meaningful volunteer opportunities to foster passion for lifelong community service engagement. In the Motiv San Diego online platform, teens find volunteer opportunities, participate in service that interests them and inspire others to take action. Informed by a Jewish tradition of not standing idly by, serving others, acting with intentionality and performing acts of loving kindness, Motiv San Diego empowers teens to realize their potential to make unique contributions to the community. Motiv is part of the San Diego Jewish Teen Initiative which is generously supported by the Jim Joseph Foundation, Jewish Federation of San Diego County, and the Lawrence Family Jewish Community Center.