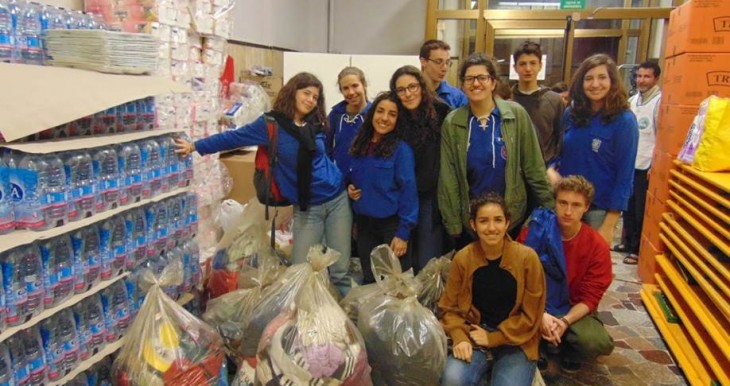 "We hold a deep commitment as Jews to reach out to refugees fleeing from combat areas and seeking refuge." - Yahel, Jewish Agency emissary in Milan.

By supporting Federation you enable us to fund life saving missions run by our partner The Jewish Agency for Israel, you help make stories like this a possibility.

The railroad station in Milan is considered one of the most beautiful in Italy. Recently, its open spaces and tall ceilings echo with the voices of thousands of refugees who have found shelter here after fleeing the humanitarian crisis in Syria.

The influx of refugees at the station began a few years ago initially with a few hundred refugees. The number of refugees who set up camp in the station continued to grow. About a third of the refugees are children. Most hope to continue on to countries in northern Europe, believing they will recieve the most assistance there.

Today there are tens of thousands of refugees in the station, in need of shelter, food and basic supplies.

The Jewish Agency shaliach (emissary) to Hashomer Hatzair in Milan, Yahel Linterneri, couldn't help but notice the refugee crisis, and understood that he was in a position to make a difference.

He called a meeting of Jewish Agency for Israel emissaries from around the world, where they met with Nadav Eyal - foreign editor of Israel's Channel 10 News - and spoke with him about the Syrian refugees sweeping across Europe. He also showed them film clips from a series he put together about the refugees, which was broadcast back Israel on Channel 10. This is a significant global problem, he told the emissaries, and it is enveloping Europe.

Yahel, born and raised on Kibbutz Ramot Menashe, is a teacher who came to Italy with his wife - both as emissaries of The Jewish Agency – and is a member of the youth movement Hashomer Hatzair. Yahel’s presence in Milan closes a circle: his father was in the Hashomer Hatzair’s Milan chapter as a youth before making Aliyah. Yahel speaks the language and has returned to it. He has relatives here and quickly realized at the beginning of the crisis in Syria that Hashomer Hatzair in Milan and The Jewish Agency needed to mobilize to help the refugees.

"We went to the Jewish community - especially parents of the youth movement members - and offered them the option of participating in clothes drives for the refugees and we turned to children and local youth to contribute 5 euros each to buy food and other necessities for the refugees, including parents and young children," he says.

Yahel adds that he “did not see any other option and I was thrilled that the community movement contributed to the volunteering efforts.”

Lunch for the city’s homeless and poor

Yahel wasn't satisfied with just collecting cothing and equipment for the refugees. He contacted an organization that runs a shelter and helps the refugees.

"[After] a few weeks of gathering that included the efforts of many families and students of all ages, we sorted out all of the collection into different categories and on one Sunday we recruited parents to drive and everything was loaded and transported to the central station. Once we unloaded dozens of bags and boxes of donated goods, we had an exciting tour through each compound: an area for children's games, an improvised medical clinic and the dining room, and then we had a conversation with Italian volunteers working there. At the end of the conversation, we prepared and served lunch for adult Muslim dwellers at the shelter."

This began a set project to help with the refugees, organized by the young members of Milan’s Hashomer Hatzair chapter.

During Hashomer Hatzair's first visit, a youth leader in Milan’s Jewish community reached out to Yahel and suggested that he submit the group’s project to a competition for urban and voluntary social engagement. The competition is organized by an organization called City Angels, which is perhaps the biggest and most influential one of its kind in Milan and operates hundreds of volunteers and employees.

"We were delighted to discover that not only was our application received and considered – an honor in of itself - but we were chosen to receive a special award at a ceremony held at the mayor’s palace," Yahel says with pride.

But even before that success, he says, the group had already participated in another venture – a royal dinner cooked by chefs well known throughout Italy and Europe, and served to refugees.
"We were invited to be part of a special organizational event that took place a few days after New Year’s, during which one of the luxury hotels in the city invited hundreds of homeless and poor to eat a delicious and luxurious lunch. The meal was cooked by the Prince of Monaco’s head chef and the dishes were served by dozens of actors, politicians, celebrities, athletes, volunteers and us. "

"We received the award during a lovely ceremony attended by the media, the president of the Jewish community, candidates for mayor, and dozens of volunteers. We were invited to the stage to speak and receive the award from Mr. Mario Furlan - president of City Angels - and the mayor of Milan, Mr. Giuseppe Fisafia himself," says Yahel.

"Immediately after us, another award was given to an Italian Muslim youth movement and we were happy for the opportunity to be photographed together and celebrate the common ground of social action."

"In a speech, our youth members mentioned the importance we see in a movement helping a weakened part of society, and in our deep commitment as Jews to reach out to refugees fleeing from combat areas and seeking refuge."

Yahel is proud of the Jewish community members who initiated the operation with the assistance of the The Jewish Agency emissaries. He adds that until he returns home to Kibbutz Ramot Menashe, with his wife and new-born baby, he will continue to work to help refugees.