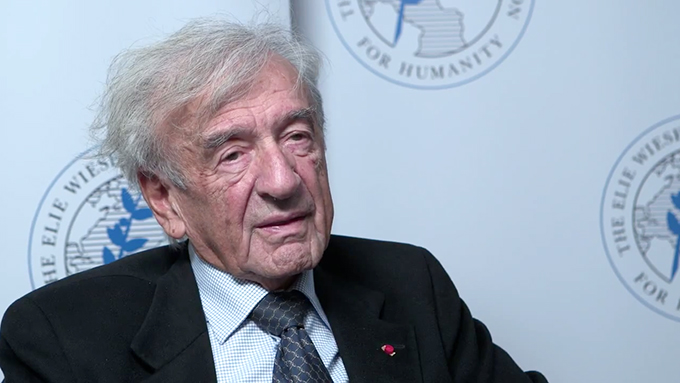 The persistence, and power, of memory in Jewish life is undeniable.

It is a driver of many great achievements and gives us pause when brazen acts of inhumanity interrupt our daily routines in the form of terrorism, hate, and persecution.

In the last week, the enormity of that fact has come home in several ways for us at JDC.

Elie Wiesel, zichrono l’vracha, was a moralist of prophetic stature, a guardian of memory, and ensured that we would never forget the horrors of the Holocaust and what people are capable of when their worst nature overcomes all else.

He taught us, and urged us, to voice our outrage at injustice and to speak truth to power in ways many of us thought impossible.

He was also part of JDC’s story; first brought by JDC from Buchenwald to France as part of a convoy of Jewish orphans, he was aided by us in the JDC-funded OSE orphan’s home where he lived and then served as music director at a Jewish summer camp we ran for survivor youth.

Elie was most recently the Patron of Joint Australia, and the recipient of our esteemed Raoul Wallenberg Award in December 1999.

Our colleague Ted Comet was Elie’s counselor at the orphan’s home and became his close friend. At our 85th anniversary celebration at the UN, where Elie received the Wallenberg Award, Ted spoke movingly of Elie’s global impact. His words, which you can read here, are as stirring and truthful today as they were then.

Elie’s impact did not end there, of course. For children of survivors, who grapple with memory of lives and generations lost, Elie was a beacon. Will Recant, JDC’s Assistant Executive Vice President, has written movingly here of his interactions with Elie and the moral force he brought to the world.

For Elie, memory was the actor that drove his dedication to ending genocide and hate, to speak out for Soviet Jews, and to remind us all that “never again” was not simply a slogan.

Indeed, “never again” has implicitly been a part of JDC’s mission since the Holocaust, whether caring for Holocaust survivors in the DP Camps, rebuilding and empowering Jewish life in places where the Nazis and Communists almost obliterated it, or in our work today aiding European Jews and Jewish communities in their desire to be resilient in the face of many challenges and to build their future despite them.

A poignant example of that work is in Poland, where nearly the entire Jewish population was wiped out in the Holocaust. Today, in Poland, we are proudly working with Polish Jews and the Jewish community, 25,000 strong, to ensure that Jewish civilization continues in the country that had one of its most profound expressions before the Nazi onslaught. Because of those efforts, JCCs, Jewish summer camps, educational and cultural activities, programs for those discovering their Jewish roots, and care for the neediest Jews are possible in Poland, and young Jews are reclaiming their heritage and innovating it in ways all their own.

The seeds of this achievement began as soon as WWII was over, when JDC reestablished itself in 1945 in Poland and worked to rebuild Jewish life and aid survivors and those who returned from places of refuge in Russia. JDC not only cared for those desperate for food, medicine, and shelter, but we helped to reestablish Jewish social services, summer camps, synagogues, schools, the Yiddish theater, and scores of other institutions that would serve Jews eager to begin again, despite the horrors they’d witnessed.

But that period was not entirely without tragedy. July 4th was the 70th anniversary of the Kielce pogrom in 1946 in Poland that resulted in the deaths of more than 40 Jews, many of whom were Holocaust survivors. In true JDC spirit, we rushed to aid those who survived the pogrom, and ensured their safe passage out of Poland when they decided to leave.

That work, and JDC’s efforts to rebuild Polish Jewish life, were the subject of a major TIME Magazine feature published in time for the anniversary, highlighting JDC’s postwar Poland archival holdings, which have been posted online by the JDC Archives, in partnership with the Jewish Historical Institute in Warsaw, for the public and scholars to search and learn from. This trove, confiscated by the Communists in 1949, is treasure that opens a window into those desperate first years after the Holocaust and the will of Polish Jews to never give up.

The story, a moving tribute to Jewish resolve and JDC’s historic reach, also demonstrates the critical importance of our work in Poland today.

Seven decades after Jews were slaughtered in Kielce, Jewish life goes on in Poland and is blossoming. In fact, this past winter we organized a widely-attended Jewish family camping experience near Kielce, bucking the winds of history once again.

Memory is a driver of many things. And while it is often accompanied by pain, frustration, and even doubt, it can also produce miracles.

Across the Jewish world and in Israel, those little miracles bring hope, and light, to a very dark world. That JDC helps kindle that light is something for which we can all be proud.