Gina Guertin was born and raised in Winnipeg, Manitoba, Canada, before eventually settling in San Diego. 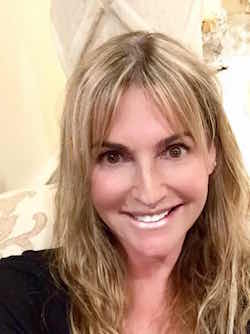 She holds a degree in Psychology, but is not currently practicing in the field. Gina worked in The Judaic Department of the University of Manitoba as a teaching assistant in Hebrew, a language which she reads, writes, and speaks fluently. Additionally, she was a principal dancer in a semi-professional Israeli dance group called “The Chai Folk Ensemble”, and travelled to many different countries and performed at amazing venues. She also owned a boutique travel agency in Canada for a number of years.

Gina has served on many different boards in a volunteer capacity in Canada over the last 10-15 years, both in the Jewish community and the general community at large.

Her interests include travel, dancing, watching sports (football!), reading and working out.

The single most important experience that influenced Gina's Jewish identity was being raised by a Holocaust survivor (her father).  She was raised in an extremely strong Jewish community and her parents were always very active in the community. As well, she had an intensely Zionistic upbringing, and spent all of her summers growing up in Israel.  All of this has led her to a place in life where she feels that she “needs” to be involved.