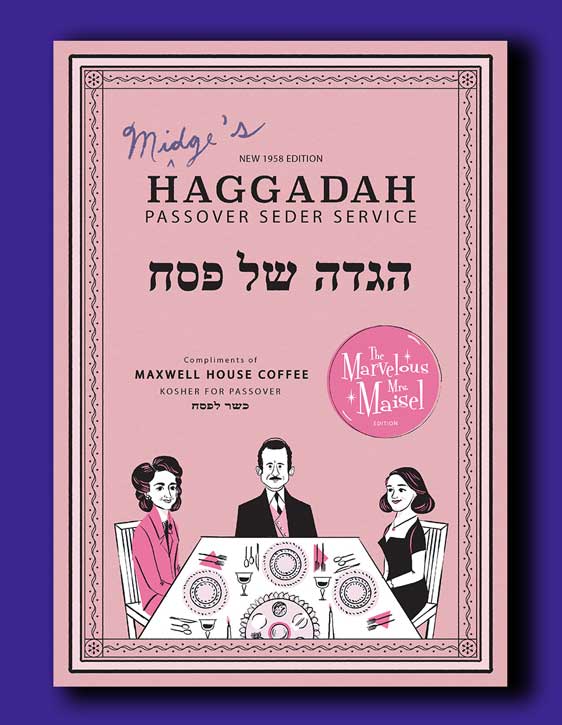 The cover of “The Marvelous Mrs. Maisel” edition of the Maxwell House Haggadah features an illustration of the hit show’s cast

(JTA) — Real life tradition and television nostalgia collide in a collaboration between the venerable Maxwell House Haggadah and the hit Amazon series “The Marvelous Mrs. Maisel.”

The coffee company is offering a limited edition version of its Haggadah featuring illustrations and other shtick based on the show about an aspiring Jewish comedian and her extended family of Jewish relatives in late 1950s New York.

The “Maisel” Haggadah is a throwback to an earlier edition of the Haggadah that the company has been offering as a holiday giveaway since 1932. Illustrations of Midge Maisel and other characters are scattered throughout the new version, which also has handwritten notations by Rachel Brosnahan’s character as well as faux wine stains.

The limited-run Haggadahs are available to those who order Maxwell House coffee via Amazon.com. Passover begins on the evening of April 19.

“There is an organic link between the Maxwell House and ‘The Marvelous Mrs. Maisel’ brands and we quickly aligned on the idea of creating Midge’s Haggadah – a combination of the 1958 classic version and Midge’s amazing personality,” Naor Danieli, brand manager for Maxwell House, said in a statement.