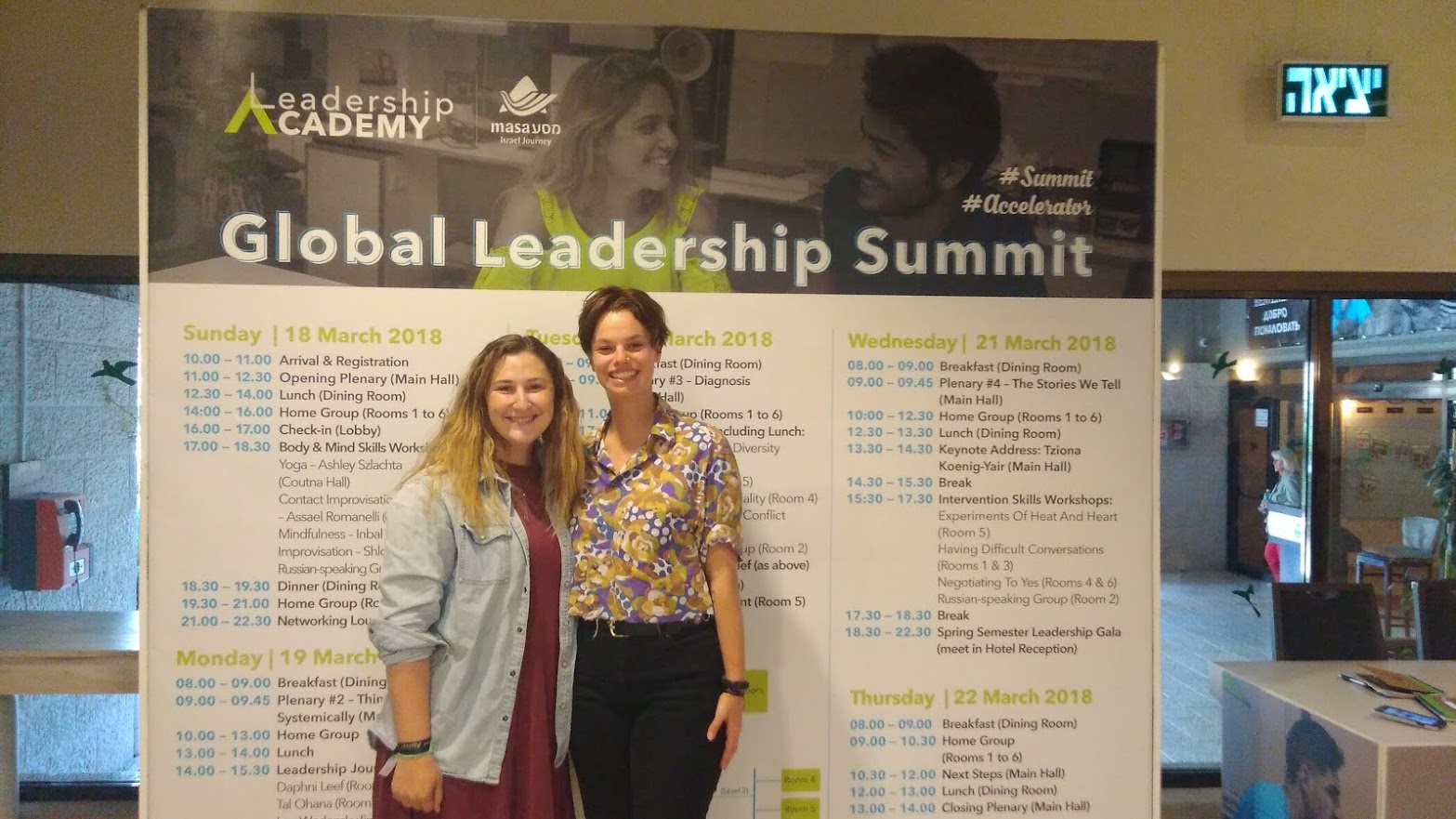 With your support, Federation is proud to partner with Masa. Since its founding in 2004, over 120,000 young people (several from San Diego) from more than 60 countries have participated in Masa Israel programs.

In March 2018, The Jewish Agency’s Masa program held a five-day Global Leadership Summit that took place at the Ramat Rachel Hotel in Jerusalem. One hundred and fifty participants from around the world were welcomed to the summit. Through hands-on workshops, stimulating speakers, and exclusive site visits, Leadership Summit attendees were empowered to become influential voices in their Jewish communities, home campuses and even on a national level.

Two of San Diego’s inspirational young people were selected from close to 600 candidates to join the exceptional young leaders participating in the Masa Leadership Summit.

Elana Caneles, 23, grew up in a community on the fringes of San Diego. She was one of only two Jewish students in her school, and supplemented her education by attending Hebrew School at Temple Emanuel in Del Cerro. It was a struggle to maintain a high-level of Jewish involvement without being surrounded by a vibrant community, yet she still felt a strong sense of connection and pride in her roots.

Upon graduating high school, Elana moved out to attend university in Orange County, where she studied Criminology, Law and Society. She became involved in every possible Jewish activity on campus – Hillel, Chabad, the Israel Society, and more. In the summer of 2015, Elana participated in a Birthright trip through Hillel and had the experience of a lifetime.

When she returned to California, she landed a job at a law firm dealing with healthcare cases for low income families. But sitting at a desk each day and filing paperwork became tiresome. She dreamed of leaving the confines of her desk and following her passion for the culinary arts, but without proper training did not see any possibility of bringing that dream to fruition.

And then she discovered Masa. Elana’s sister had just returned from a 5-month internship in Israel, and the stories of her experiences were so vivid and exciting that she decided to look into options for herself. Through Career Israel, a Masa program, Elana found an opportunity to work as a Pastry Chef in one of Tel Aviv’s top hotels.  This was exactly the push she needed, and a few months later, she was on a plane headed for Israel.

Elana adores her internship. She is learning unique skills from some of the most renowned chefs in the region and developing connections internationally that will open up job opportunities for her in the future. While soaking up the Tel Aviv atmosphere, enjoying the sun and sand, Elana has developed relationships with Jews from all backgrounds and ages, learned basic Hebrew, and managed to get her foot in the door of an industry that she never thought available to her.

Following the program, Elana intends to explore MBA opportunities as well as a career in hospitality and catering. With the vast tourism and hotel industry in California, she is sure she will find her place professionally, and with her love of Israel and the Jewish people, she is committed to return as an engaged and active Jewish community member.

Jess Tierney, 23, grew up in Carmel Valley. She went to school in La Jolla and attended Temple Beth Israel. Following high school, Jess went on to study Environmental Science at UC Davis, and while there was a strong Hillel, she was not particularly active in Jewish circles. She was, however, part of an improv and comedy troupe on campus, which typically attracted a lot of Jews.

One summer, Jess served as a counselor at a Jewish camp where she heard about Masa through a friend. She explored a number of options and came across Masa Israel Teaching Fellows (MITF) – a ten month program of informal English education taking place in Israeli high schools across the country. She registered for the program, but then instantly had her doubts – such a long period of time in a country that she had never explored before. Jess decided to enroll in a Birthright program that summer to “test the water” and in June 2017, participated in the 10-day trip. She loved the experience so much that all doubts left her mind. Just two months later, she returned to Israel with Masa.

Jess is now teaching through MITF in a school in Netanya. Her chapter of the program includes 28 volunteers working in 17 different schools in the city. The greatest challenges she has encountered are the structural and behavioral dissonances between Israeli and American high school kids. As an informal educator, she finds herself unsure of what level of discipline to impart, as well as the added complications of the language barrier. Through the program she has been paired with host teachers from the school faculty who assist her with these daily challenges, and has managed to create a warm and friendly vibe among the students attending her classes.

Since starting the program, Jess has seen an attitude shift both in her students and in herself. Her students are excited to join her classes, feeling that they are privileged to be invited. For Jess it has opened her eyes to the unique challenges facing the state of Israel, and the impact North American Jewry can have on its people.

Masa Israel Journey is the leader in immersive international experiences in Israel for young adults, ages 18-30. The diverse portfolio of study abroad, internship, service learning, or Jewish studies programs help participants grow—as a person, a professional, and a leader— while also developing a robust global professional network. Since its founding in 2004 by the Prime Minister's Office of the Government of Israel, together with The Jewish Agency for Israel, one of Federation's overseas partners, over 120,000 young people from more than 60 countries have participated in Masa Israel programs.