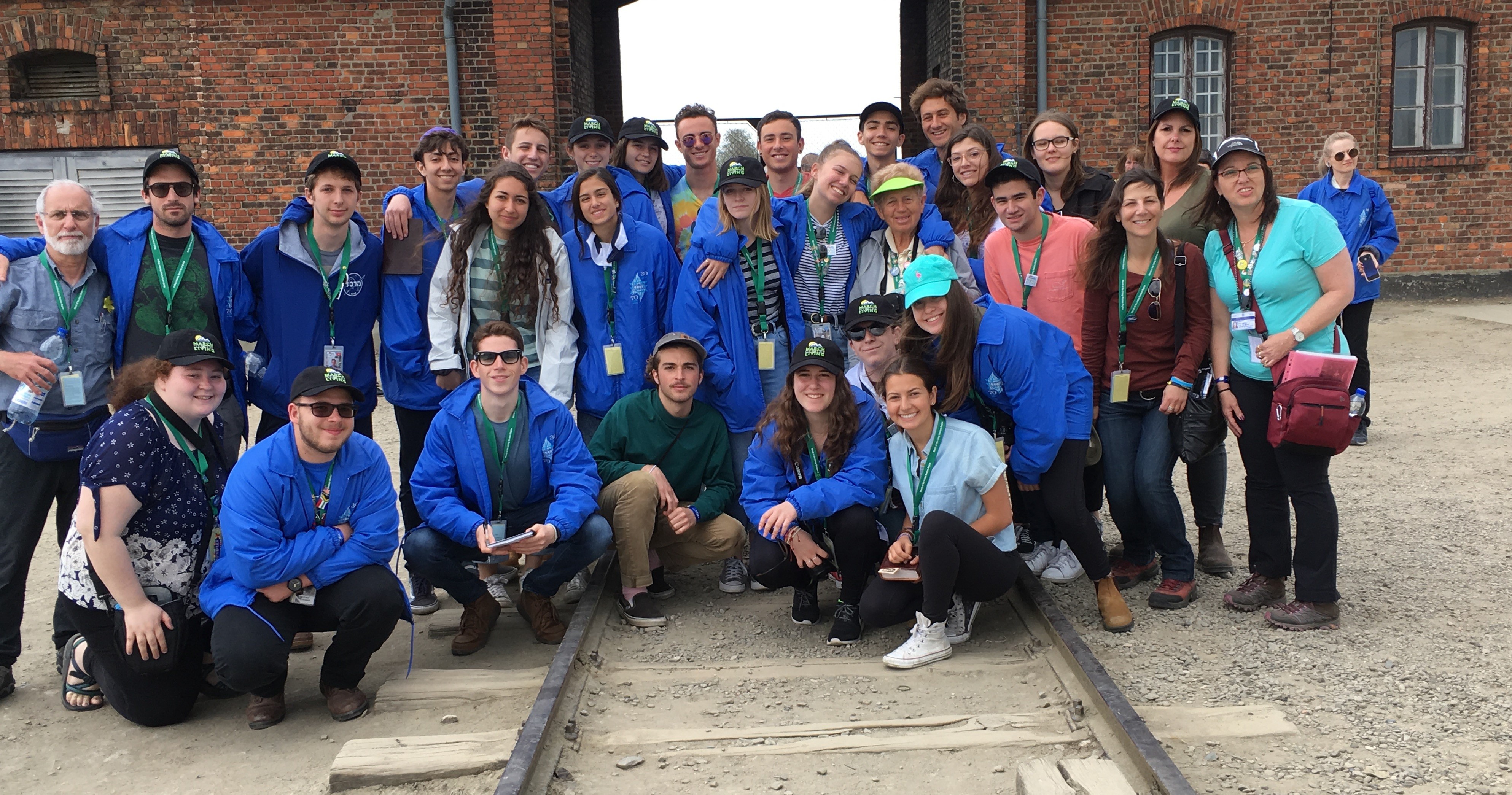 Western Region participants at the entrance to Birkenau.

The March of the Living is an international educational program that brings Jewish teens from all over the world to Poland on Yom Hashoah, Holocaust Memorial Day, to march from Auschwitz to Birkenau, and then on to Israel to observe Yom Ha'zikaron, Israel Memorial Day, and Yom Ha'atzmaut, Israel Independence Day.

The goals of the March of the Living are both universal (fighting indifference, racism, and injustice) and particular (opposing anti-Semitism, and strengthening the Jewish identity and connection to Israel). Over the years, students of diverse backgrounds and cultures have participated in March of the Living, furthering these ambitious goals.

In 2018, 14,000 participants marched from Auschwitz to Birkenau representing 52 states and countries. 2018 marked the 30th anniversary of the March of the Living, and the 70th anniversary of Israel's independence.

Below is a reflection from March of the Living participant and high school senior, Maddie:

Instead of writing out the series of events today, I am going to write out a stream of my thoughts. The reason for this is because today was a rollercoaster of emotions, and I cannot pinpoint just one story that has changed my perspective on life.

I woke up this morning knowing I was soon to embark on the very experience I came here for. With a dash of jet lag, I felt determined to march for the genocide of the people in the Holocaust. I felt inspired to make my sign, wear the flag of Israel, and march peacefully beside my friends I have known for years, and the new friends who I feel like I have known just as long.

Every time I step into one of those horrible camps, I feel this sense of evil. It’s this inexplicable, disturbing, and treacherous energy that is stained into the cement and carved into the walls.

Out of all the concentration camps I have been at, I felt something bigger than myself. I felt sad and felt a pain I can't describe. However, the second I walked into Auschwitz, I didn’t feel any connection. Perhaps it was because of the museum type structure - but even the thousands of hairs, ceramics, bags, and faces did not affect me. It was so unbelievably massive that I could not wrap my head around this ever happening. I didn’t feel any sense of realness until I walked into the gas chamber.

People can look at the gas chamber, but it’s only when you walk into its walls that you will feel that undeniable, musty, and heavy silence. This silence speaks the words that the people who entered never got to say. This silence whispers the things no one will ever see but the people who watched through the holes in the wall. This silence reminds us how we will walk out safely, but they never will. My friend pulled out a picture of her great-grandparents who died at this camp. I put my hand on the gas chambers walls, slowly tracing the outlines of scratch marks made by desperate hands- a last attempt at life. They fought.

Moments later, someone who I did not know was a survivor joined us. I’m not sure from which camp, but I assume Auschwitz. I wonder if he was a child who survived or if we were praying or talking to someone who died there. He starts facing the back wall of the gas chamber and begins to speak a language I cannot understand. His voice is the only sound in the chamber of this silence. I could not understand the language, but I felt his pain. He turns around, tears in his eyes, his mouth slightly opened, and eyes wide with terror. I’m sorry, but I can’t describe the way he looked because I cannot put into words the way his face was when I saw him. I have never seen a human emotion that was simultaneously as disturbed, terrified, painful, and grateful as that. Of course, I began to cry. This was the first time this whole trip that the march felt real.

We saw the museums, the children’s drawings of before, during, and after the Holocaust. We saw the videos of Nazis. We saw it all.

After about a half hour and lunch we put on our Israeli flags, and we marched to our western region spot, the place where we would begin to march. We met hundreds of people, we exchanged pins and key chains- even hacky sacks, shirts, and hats. We made connections with people easier than some people can with the people they have known for four years in high school. People may ask why, and I can tell you why. It’s because we all share something in common. We came to this place for a purpose and that purpose was to march for the ones who can’t. We will never forget and to always remember and be proud of our heritage. The U.S, Poland, Israel, Brazil, Canada, Mexico, Morocco, Austria, Argentina, India, Japan, South Africa, etc were there. People from all around the world who speak different languages and have different stories came to this march because they share one thing. And that is being Jewish and to commemorate the ones who perished.

At the end of the march, there was a fire. It was looming over the camp. The black hung high over the sky, and that sense of doom returned. However, there were around 12,000 of us, reminding the world that this won’t happen again. As proud Jews and good moral people, we will never forget. I can never forget the face of that man, the drawings from the children, and that silence that is somehow so loud, it drowns you. This experience was unforgettable. I am so incredibly grateful I had the chance to learn about the Holocaust from this different and real perspective. Yes, it was sad. And yes, it was hard. However, the joy I see in the people who marched by my side, will always remind me that this world is filled with wondrous things. There was a group of children waving at us, and Jordan, one of our group, ran up to them, with a big smile and gave them high fives. I saw a man smile and hug his friend saying, “There is hope in the world.” I must say I agree. I believe this world Is full of hope, and it is up to us as agents of change to continue positive progression and change in this world. I know we can.