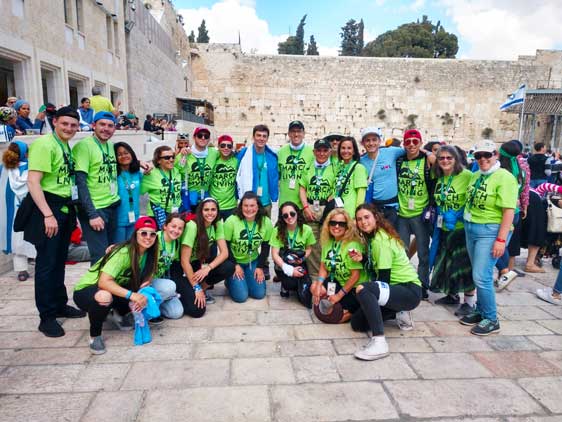 2019 March of the Living participants in Israel

March of the Living is an international educational program that brings Jewish teens from all over the world to Poland on Yom Hashoah, Holocaust Memorial Day, to march from Auschwitz to Birkenau, and then on to Israel to observe Yom Ha'zikaron, Israel Memorial Day, and Yom Ha'atzmaut, Israel Independence Day.

The goals of March of the Living are both universal (fighting indifference, racism, and injustice) and particular (opposing anti-Semitism, and strengthening the Jewish identity and connection to Israel). Over the years, students of diverse backgrounds and cultures have participated in March of the Living, furthering these ambitious goals.

In 2019, 10,000 participants marched from Auschwitz to Birkenau representing 52 states and countries.

Our delegation was blessed to have local Holocaust Survivor, Ben Midler, accompany us on this journey as we followed his path of being born in Bialystok Poland, interned in Majdanek and Auschwitz- Birkenau and then serving in the Palmach.

We asked the teens to share their personal reflections following the trip. Ryan Lewis, 2019 March of the Living participant and My Israel Journey recipient, shares his thoughts below:

The blaring siren sent chills up my spine as the clock struck 11:00 AM. Standing inside of a beautiful park and overlooking a major street in Tel Aviv, I watched every driver come to a stop in the middle of the road, get out the car, and stand in silence. Avid Israeli runners took out their earbuds and stood still. Newborn babies were taken out of their strollers as their mothers cradled them in their arms while they stood silent. The chirps of the birds occasionally broke through the siren, but all else was frozen. It seemed like the world froze.

Today was Yom HaZikaron (Memorial Day in Israel) and it completely contrasts to Memorial Day in the US. In the US, I get to enjoy an extra day at the beach or procrastinate one day longer for homework. I never think about the veterans that risked their lives to ensure the safety of all of its citizens. I haven’t internalized Memorial Day because I have no immediate friends or family that have perished through various war efforts. Since I have no stories that I can point and relate to, I have found myself almost apathetic towards the invaluable efforts of our US soldiers and veterans. However, after our Stand With Us meeting, and the documentary of the lone soldier story of Michael Levin, I caught myself becoming emotional when the siren blared.

Every Israeli knows some extended friends or family who have perished to protect Israel, a sanctuary in the Middle East amongst chaos. There are no barbecues or bonfires throughout the day; only every show on television sharing stories commemorating those who have perished in the Zionist effort. Foreign bystanders who listen to the siren also have visible expressions of sadness and an ever-increasing level of respect despite possibly lacking any personal connection to the soldiers of the Zionist struggle. Honor is ingrained in Israeli society.

After leaving the 9/11 memorial site right outside of Jerusalem, all of us understood the close relationship between the US and Israel. Both countries can understand that there is no place for terrorism on this earth; over the past weekend that we were in Israel there were over 600 missiles launched from the Gaza Strip into Israel. If this had to happen to any other country, it would be an immediate cry to relentless war, but Israel committed to a cease fire, for which they have been criticized. Israel thoroughly understands the horrors of being under foreign attack, which is why 9/11 impacted Israel as a whole.

Screaming “Am Yisrael Chai!” at the top of my lungs in the middle of a random square in Jerusalem and holding arms with thousands of other Jewish people from across the world marked the beginning of Yom Haatzmaut, or Independence day for the country of Israel.

As I write this, it is almost 2:30 in the morning and I can still hear the music and the singing from all of the Jewish people from my hotel room. As soon as the sun went down, streamers and silly string shot in the air and everyone wore various plastic and rubber light up jewelry. Transitioning from expressions of depression to euphoria only strengthens the determination of the Jewish people to protect Israel. Despite the cycles of tremendous horrors that have bombarded the Jewish community over the last 3000 years we rise above.

As Michael Levin put it, “You can’t fulfill your dreams unless you dare to risk it all.”

The dates for the 2020 March of the Living are April 19- May 3. For more information contact Marcia Tatz Wollner, or visit www.motlthewest.org.