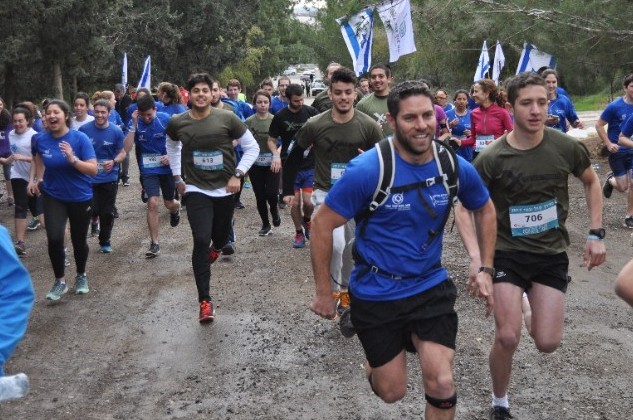 Gilad Shoham and others from Kol Ami Kiryat Yearim at a race supporting lone soldiers. Photo: Nathan Roi for The Jewish Agency for Israel

San Diego's Israel Connections Initiative fosters engagement and connections between San Diego and Israel. With your support, we are proud to partner with the Jewish Agency for Israel (JAFI). JAFI brings Jews to Israel, Israel to Jews and helps build a better society in Israel and beyond.

As a guiding force in the lives of Jewish young adults from Israel and the Diaspora, Gilad Shoham helps them become “complete Jews” and well-rounded citizens.

“We want people to leave here with a well-formed approach to life, after gaining experience here, that they should leave here better prepared for the army and beyond,” says Gilad, director of The Jewish Agency’s Kol Ami Mechina at Kiryat Yearim, near Jerusalem. “The army service ends and life begins, and then—we hope—the mechina (pre-military academy) will come to the fore and will encourage them to think about the important issues of life.”

The Jewish Agency’s Kol Ami: Jewish Peoplehood Academies bring together post-high school Israelis and their Jewish peers from abroad, with the aim of strengthening the participants’ connection to the Jewish people. The curriculum includes personal growth and empowerment; learning and volunteering together to benefit Israeli society and each other; studying public diplomacy, Jewish texts, and the concept of a unified Jewish people; and building physical endurance and navigation skills.

Gilad is continuously determined to provide the Kiryat Yearim academy’s young men and women with a toolbox for their future life.

“Here at the mechina, you can find leadership training, preparation for the IDF, and the development of self-identity and Zionism,” he says. “A healthy balance is maintained between all the various components. We also offer the component of the connection with the Jewish people. How do we go about that? The mechina caters for a mixed group of youngsters, from Israel and from the Diaspora. That is something one lives with in the same room—a direct encounter with Israelis, both secular and Orthodox, boys and girls. I live with them, and this eclectic experience impacts the consciousness of each and every participant. They meet new people and think about what is good for them, as an Israeli and as a Jew.”

As an example of one of the academy’s key activities, Gilad cites a hike that incorporates physical and psychological challenges. The mechina places its emphasis not solely on training participants for military service, but on a holistic approach to personal development. Graduates, meanwhile, are eager to give back by sharing their experiences and insights with current students.

“We have a graduate who became a transport driver and completed his transport course as the outstanding participant in his class,” says Gilad. “One evening, he came to the mechina and gave a talk on ‘What Does it Mean to be an Israeli?’ The mechina graduates want to do the best they can in the place they reach, in the army and in the community.”

The mechina organizes gatherings for graduates and current students on Israeli Independence Day and Yom Kippur.

“Students meet the graduates, they see where they are. And the community of graduates grows and grows, and they want to be involved. You see from these gatherings that those who study at the mechina want to be contributing citizens,” Gilad says.

“Anybody who leaves the mechina is a thinking person, is aware of their identity, and is a person who wants to make the most of themselves,” he adds. “They want to say, ‘I am a better friend, I am a better child of parents.’ There are parents who come and tell me that they have a different child at home after the mechina.”

By Nathan Roi for The Jewish Agency for Israel