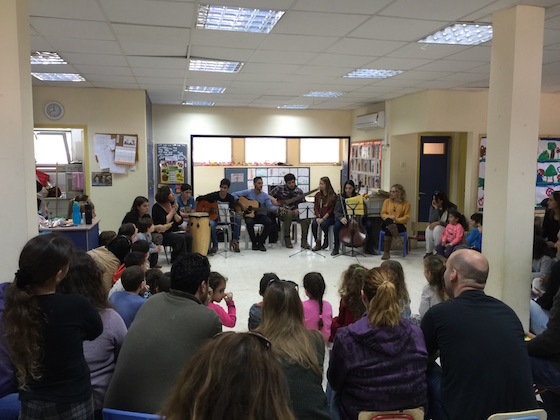 This made possible thanks in part to the Jewish Federation of San Diego County, which assists us greatly in funding and carrying out the project.

Everybody knows that music is a language without words.  For that reason music has the ability to reach all of us, large and small, old and young.  The world of music doesn't depend on age; therefore music-related activity in Sha'ar Hanegev communities begins at a very early age.

Each week two music teachers from the region, Michal Weiner of Kfar Aza and Neta Ben Asher of Kibbutz Dorot, equipped with their personal musical instruments and instruments for the children, make the rounds of different kindergartens.  In doing so, they offer children a gateway to the world of music.

Their involvement in kindergartens and in the lives of the children reaches its heights during holidays, year-end parties and the like.  Aside from that, the music teachers in association with the Music Conservatory conduct two special day-programs.

The first such program took place in February under the banner of the traditional 'Kindergarten Concert'.  Each year a different theme is chosen for the concert.  In previous years the children were exposed to artists such as Uzi Chitman, Arik Einstein and Leah Goldberg as well as the themes of water and nature.

This year the children were exposed to the well-known Israeli poet Yehoram Taharlev.  They learned five of his poems, some of them nostalgic and others taken from the world of children.  Each week a music teacher accompanied by the kindergarten teacher taught the children to sing the words of his poems.

One Friday in February, a parent-child assembly was held in the kindergarten.  Also in attendance were five or six music students from grades 9-12 who attend the Music Conservatory.  Together, the entire assembly learned to perform musical renditions of Yehoram Taharlev's poems.  The result was a moving encounter between participants of different ages—teens playing music, children singing, and parents, despite holding the words to the songs, mainly enjoying themselves aside from the singing.

The Kindergarten Concert is a unique and special event in which children learn classics from the Hebrew song repertoire as well as lyrics that include new and sophisticated words. Through the songs, they learn about Israel, about various sorts of emotions, and about poets and composers.

The final and most beautiful feature of the project is the performance from the students from the Music Conservatory.  They come to the kindergartens and contribute their time and abilities to the event.  The audience of children and parents are amazed by the wonderful quality of their playing.