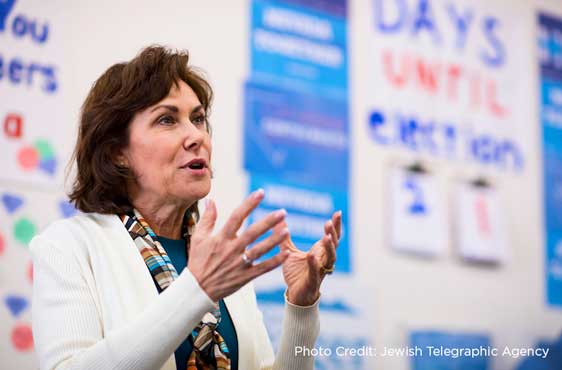 Sen. Jacky Rosen of Nevada, seen in 2016, is one of the lead sponsors of the bill to fund Holocaust education programs in schools. (Bill Clark/CQ Roll Call/Getty Images)

“At a time when antisemitism is on the rise in the U.S. and around the world and the memory of the Holocaust is at risk of fading from the collective consciousness, comprehensive Holocaust education is more important now than ever,” said Mark Wilf, Chair of JFNA’s Board of Trustees. “We commend Senators Rosen, Cramer, Rubio, and Blumenthal for their leadership in ensuring that students throughout America’s schools learn the critical teachings of the Holocaust.”

“We proudly support this important legislation to ensure that the lessons of the Holocaust are not forgotten and that future generations are equipped to build a society free from hatred,” said William Daroff, JFNA Senior Vice President for Public Policy. “This is a major priority for our organization and we look forward to working with our partner Hadassah to ensure that every Senator co-sponsors this bill, and with Senate leadership to pass this bill expeditiously.”

S. 2085 is the companion bill to H.R. 943, introduced by Representatives Carolyn Maloney (D-NY) and Elise Stefanik (R-NY), which has over 200 bipartisan co-sponsors and would authorize the Secretary of Education to award grants to carry out Holocaust education programs and provide technical assistance on how to most effectively teach the subject. This legislation would improve access to Holocaust education around the country by authorizing public funding of $2 million per year for five years and the collection of private donations in a classic public-private partnership. Funds would be directly available for teachers for training and to develop individualized programs that best suit their students.

The Jewish Federations of North America (JFNA) represents 147 Jewish Federations and over 300 Network communities, which raise and distribute more than $3 billion annually and through planned giving and endowment programs to support social welfare, social services and educational needs. The Federation movement, collectively among the top 10 charities on the continent, protects and enhances the well-being of Jews worldwide through the values of tikkun olam (repairing the world), tzedakah (charity and social justice) and Torah (Jewish learning). Learn more at jewishfederations.org.