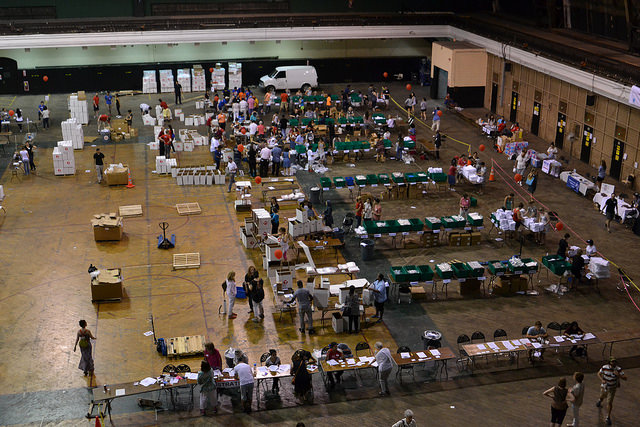 When you support Federation, you help us directly support the American Jewish Joint Distribution Committee (JDC) and their important work helping all people around the globe who are in critical need. Thank you for all that you do.

For three years now, the civil war raging in Syria has produced millions of refugees fleeing violence, presenting a global humanitarian challenge to nations in Europe, the Middle East, and beyond.

Though many people in the U.S. read devastating headlines about this crisis daily, few are sure of what they can do to help.

That is why JDC teamed with its partners Heart to Heart International, the Multifaith Alliance for Syrian Refugees, diverse faith groups, and corporate sponsors including Henry Schein, Inc., FedEx Corporation and BD on Sunday, June 26 to assemble thousands of critically needed hygiene relief kits for Syrians refugees in Turkey.

The event, called “Faith & Heart: Uniting to Help Syrian Refugees,” brought together more than 750 volunteers of many religions at the 69th Regiment Armory in New York City. It is being touted as the largest and most religiously diverse gathering held to assemble emergency supplies for Syrian refugees.

“Standing on a line of volunteers, adjacent to a Muslim woman wearing a hijab, a congregant from the Harlem-based Riverside church, and a rabbi discussing the desperate situation facing refugees, I felt tremendous personal and professional pride to be serving as a representative of JDC,"  said Will Recant, assistant executive vice president, International Development Program, JDC. "There was a palpable feeling of togetherness and brotherhood as we became one unique community, volunteering in service to those Syrian refugees living in desperate conditions. I am extremely proud and honored that JDC was able to partner with Heart to Heart and the Multifaith Alliance to create what was truly a holy community."

For five hours, the volunteer teams worked together in an assembly-line style to put together about 7,500 kits that will provide refugees with shampoo, soap, combs, toothbrushes, and toothpaste, all necessities nearly impossible to find in refugee camps. There were also kits put together with the specific needs of women in mind.

“We as Jews were once not only slaves in Egypt, but also refugees. No one should be either of these and while we say never again, things like this keep happening," said volunteer Joe Varon, a retired special education teacher from West Hempstead, N.Y. "I’m here to help those in need; that’s what my Judaism means to me."

From the beginning of the crisis, JDC, along with the Jewish Coalition for Disaster Response (JCDR), has been aiding Syrian refugees through its apolitical, nonpartisan Jewish humanitarian response. To date, this effort has raised more than $1.75 million.

During the first phase of work, JDC and JCDR assisted thousands of Syrian refugees in Jordan through key medical, nutritional, and psychological aid. Since then, the response has expanded to include Syrian refugees now living in the Middle East and Europe with JCDR’s second phase of work including humanitarian relief for refugees and first responders in Hungary, Turkey, Greece, and the Balkans.

JDC, working through its local Hungarian staff and local NGO, has aided refugees at the Debrecen Refugee Camp and partnered with the Turkish Jewish community and International Blue Crescent to deliver desperately needed school supplies to thousands of refugee children in Turkey.