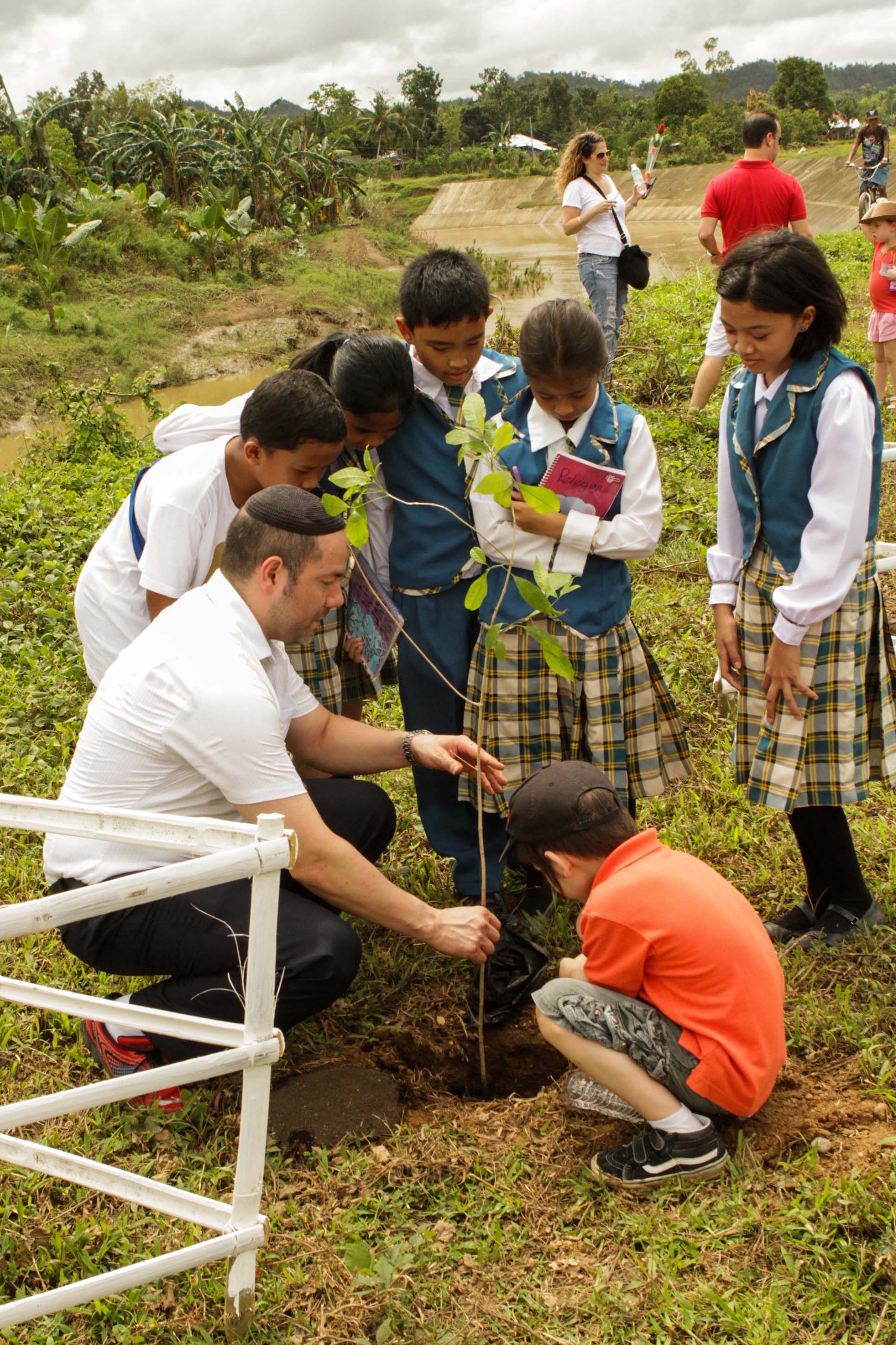 As people around the world gear up to celebrate Earth Day on Saturday, April 22nd, the recent work that JDC, the Jewish Association of the Philippines (JAP), and Israel did by planting trees to absorb flood waters still present at the Mambusao Elementary School in the Philippines has important resonance.

The tree planting was just one element of the group’s special visit to Roxas City in the province of Capiz, Philippines called, “A Trip for a Cause Community Family Trip to Roxas City,” part of a wider effort to showcase the post Typhoon Haiyan work that JDC, along with its partners, have completed since the disaster devastated the country back in 2013.

The Manbusao Educational Campus in Mambusao, also located in Capiz, was selected for this outing as it is one of two remote schools in Panay that was severely damaged by the typhoon and through the cooperation of JDC, the Jewish Association of the Philippines, and Hit Productions, two preschool classrooms were constructed.

Following the construction, a twinning program was developed between the Jewish preschool Gan Etz Ha Haim in Manila and the Mambusao Elementary School as well.

“JDC’s continued work in the Philippines, in partnership with the Jewish Association of the Philippines, is a perfect example of how we provide immediate and long-term assistance to those in need on an international scale,” said Orly Fruchter, JDC’s Philippines Coordinator, International Development Programs. “Our trip to Roxas City underscored our shared commitment to the value of tikkun olam and the role of the Jewish people, and local Jewish communities, in caring for their neighbors at times of great need.”

Fruchter, together with the Jewish Association of the Philippines’ Rabbi Eliyahu Azaria, were on hand during the tour of the Roxas City-based elementary School where books were donated to students.

Twenty-five longtime and new community members, spent the weekend learning about the crucial needs of the Filipino community, as well as rejoicing through song and dance with students and teachers alike.

The excursion also enabled the group to witness the high level of education these students are receiving, in addition to the compassion, ambition, and perseverance the youth have radiated even during tough times.

“I am very proud that our community has come together to help children less fortunate than ours. It was a wonderful learning and bonding experience,” said Lee Blumenthal, director of the Jewish Association of the Philippines.

For the majority of participants, it was their first time spending time in a remotely located and poorer community in the Philippines. This visit will help to expand the type of outreach programs and services that the Jewish Association of the Philippines offers to Jewish and non-Jewish community members in the near future.

“One of the most important values in the Jewish tradition is tikkun olam, meaning repairing the world. This is our commitment to the Filipinos, and shall always be,” said Hadas Nisan, deputy ambassador of the Israel Embassy.

Immediately after Typhoon Haiyan struck the Philippines in 2013, JDC deployed its disaster relief expertise and partnered with the Jewish community. JDC, together with partners, delivered key necessities including food, water and sanitation items, and funded the construction of schools and other relief and rehabilitation projects. JDC also supported the IDF field hospital to aid those in need of medical attention.