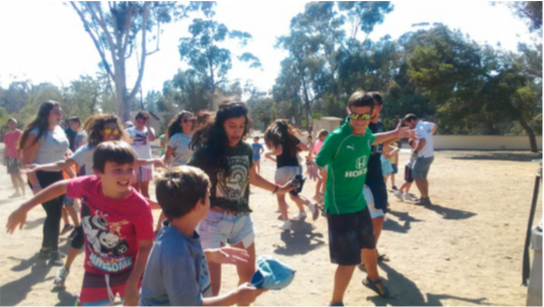 Your directed Federation gift to Fostering Connections with Israel, supports programs such as Partnership2Gether and My Israel Journey which help strengthen the bond between youth in Sha'ar HaNegev, Israel and the San Diego. Thank you for all that you do. For more information on these two programs and more, contact Jane Fantel, Director of Israel Connections at janef@jewishfederationsandiego.org or (858) 737-7122.

This year eight 11th grade Sha’ar HaNegev students traveled to San Diego.  Each of them had already served as counselors for two years in the Sha’ar HaNegev Regional Council. During this trip, the Israeli teens guided campers for two weeks at Camp Jaycee and at Camp Sababa, run by Congregation Beth Israel.  In addition, our wonderful Israeli teens led other campers from Camp Ken and Temple Solel’s Camp Simcha, through a special Israel Day.

Preparations for the group lasted about eight months and included practicing English, becoming familiar with the U.S. communities, and building lesson plans on assorted topics such as: the kibbutz, Sha'ar HaNegev, Israeli inventions, Israeli geography, Israeli & Jewish symbols and more. The preparations and the teens' experience in youth movements, gave them the needed flexibility for leading a variety of camp activities. Most of all, they simply enjoyed playing with the children and teens at the various camps. Games ranged from hide & seek, tag, to special games with an Israeli twist. The high point for the Israeli teens consisted of building activities for Israel Day, which included interesting activity stations that provided a host of different experiences including a wild session of lively folk dancing, led by the Israeli counselors. What the Israelis particularly appreciated about their trip, was the privilege to serve as Israeli ambassadors in San Diego.

For three weeks the Israelis formed close relationships with the host families in San Diego whose children have been in Sha’ar HaNegev, or will arrive this December to Israel. As far as the San Diego teens are concerned, Sha'ar HaNegev will always be a place to visit and reconnect when in Israel. While in Israel, the American teens have an opportunity to engage and connect with their Israeli counterparts. It's a refreshingly different and unique experience to have, with terrific potential to continue those connections into life-long relationships. Only then, can one understand how strong these relationships can be—despite living an ocean apart and despite the many hours of traveling time. The children at the different camps are becoming connected to Israel—connected to the face and symbols of Israel, to its customs and its impressive enterprises. They become familiar with the Hebrew language and are exposed to Israeli music. Anyone involved in the project, even in a small way, benefits from it.

In a short, while we begin working with next year's teen delegation, we build on the many successes we have had this summer to constantly improve our program making it better and more meaningful each year. We'll strengthen our circle of connections with Jews from around the world and from San Diego. And all together, we'll strengthen ourselves as a force that's even bigger than the State of Israel: as a Jewish People.