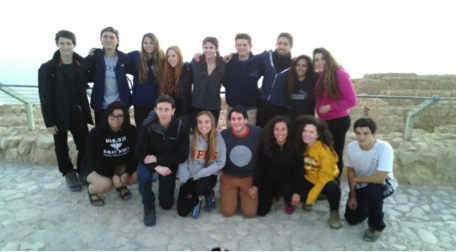 San Diego has made a 17 year investment with our partnership region, Sha’ar HaNegev.  Our focus continues to be to expand and deepen the opportunities between our two communities in order to have meaningful connections with one and other. One-way in which we accomplish this by helping fund great projects run by our partner The Jewish Agency for Israel. Your support makes these projects possible. Thank you for all that you do.

December holidays allow all sorts of visitors to take advantage of their winter vacation and come to Israel.  Among those to arrive was a group of 10 teens from Congregation Beth Israel in San Diego, accompanied by the congregation's director of youth affairs – for a ten-day trip to Israel.   On their second day in Israel, in Tel Aviv, they were joined by seven 10th graders from Sha'ar Hanegev.  Their first evening was devoted to spending time together, breaking the ice and getting to know each other.

The following day, the teens toured the local high school followed by a tour of Nahal Oz so as to familiarize them with the Sha'ar Hanegev region. Their morning continued with home hospitality in which the Americans experienced an Israeli home, an Israeli dinner, and spending time with Israelis. The Sha'ar Hanegev experience continued with a bus trip to the school and a visit to Yahdav Center, where the teens created ceramic flowers to add to the charming garden at the Center's entrance.  From there they proceeded to Kibbutz Kfar Aza where they met with a group of soldiers and listened to them describe their duties in the army.

The joint activity had two goals: (1) To familiarize our visitors with Sha'ar Hanegev; (2) to connect between the San Diego teens and our teens from Sha'ar Hanegev.  In order to ensure the achievement of the second goal, the Israelis continued traveling with the American group for an additional day.  They visited Kfar HaNokdim, took a camel ride, slept in a Bedouin tent, and woke up early next morning to climb Masada and view the sunrise.

Lior Goren (Ruhama): "We showed them what a kibbutz looks like, what our Regional Council and school look like.  We took part in a bonding activity and taught them a little Hebrew.  We got to meet other teens of our ages from another place—with their different customs and habits, and with the language difference making things a bit difficult.  But still, we connected with each other really fast and are keeping in touch.  We succeeded in bridging the gap and found a common denominator between us.  It was important for us to show them what Israel is really like.  Despite the terror attacks and other problems, there are a lot of good things about Israel, especially its good people (and teens!)"

Amit Gilboa (Bror Hayil): "We discovered there were some differences, but mainly they were small things like a different sort of humor and/or inside humor."

Tal Caspi (Kfar Aza): "We became familiar with another culture and got a glimpse into their worlds, which we will ultimately visit."

Dror Salom (Or HaNer): "But at the end of the day, we discovered that we're not all that different.  We found common denominators in our hobbies, fields of interest, music that are typical for all teens, and, something that we all share…Love for Israel."