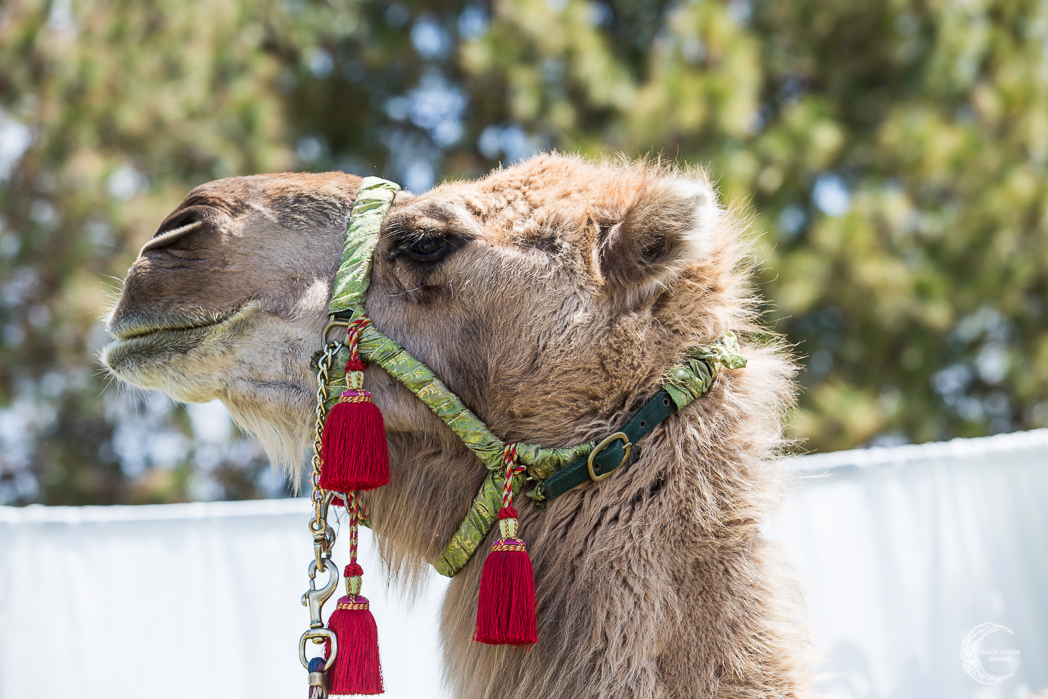 A trip to Israel Fest on Sunday led to Camelot.

In this case, Camelot was a well-behaved camel, wearing an intricately woven Middle Eastern blanket over his saddle. He posed regally for photographs and graciously tolerated strokes and pats from admiring humans.  The fact that we humans all were a couple heads shorter than he was may have prompted him to think of us as his adoring small fry.

Camelot, who is 20, was brought to the IsraelFest by owner Gil Riegler, who owns the Oasis Camel Dairy in Ramona.  The dairy isn’t producing products for eating or drinking, he said, but rather for use as soaps and lotions.  Selling camel dairy products as food or drink would require going through numerous FDA hoops, an expensive and time consuming proposition for a small business like Riegler’s.

Riegler said Camelot has his eccentricities.  For example, he’s not particularly fond of other camels, although there are a score of them at the Ramona facility.  Instead, he prefers to congregate in the pasture with three horses, who apparently have elected him leader. Wherever he goes, they follow, he said.

Among the horses, one is older than Camelot, one about the same age, and one younger, so we can assume the horses are attracted by his charisma rather than responding to any issues of seniority.

Riegler has triple citizenship—in Canada, where he was raised; in Israel, where he lived on a kibbutz, and here in the United States, where he now makes his home.

If my wife Nancy and grandsons Shor and Sky had only the opportunity to visit up close with the camel, dayenu!

But, in fact, Israel Fest was a happy hunting grown for swag—more formally known as tchotchkes—which seemed to proliferate at the booths staffed by volunteers for a myriad of synagogues and Jewish organizations. Grandson Shor, 11, carried home a bag filled with enough souvenirs to last him far into the future—or at least until the next Israel Fest when the Jewish State will celebrate its 71st birthday.

As Sky and his friends, Gavriel and Yaron, collected “stuff,” Nancy and I took advantage of The Spice Way’s desire to acquaint festival attendees with the joy of Israeli salads. Proprietor Debbie Kornberg—who also is the rebbetzin of Congregation Beth Am—said as one who has a background as an educator, she wanted to teach people how easy it is to build a healthy, pleasantly spiced salad. So, she dished out bowls of arugula lettuce into which we could cut our own cucumbers, onions, and baby tomatoes, and add some feta cheese, zaatar. and lemon and olive oil dressing. Yum, a delicious salad!  Nancy and I sat down near a “jump house”, and along with the family of psychologist, and author Eric Kaufmann, consumed the salad along with interesting conversation.

Meanwhile, Shor, ever the photographer, prowled around the festival looking for interesting scenes.  There was much to attract his attention, but there was room in this article only for a handful of his images, among them a large “Ahava” (Love) sculpture brought from Los Angeles by the Israel American Council (IAC); Israel-related student art posted on an outdoor gallery; and singer Shannee Zamir who entertained with popular Israeli and Jewish tunes.

Following my salad lunch, I succumbed to the blandishments of the Zionist Organization of America, which was offering SodaStream root beer floats. SodaStream, an Israeli company, developed a process by which one can carbonate water and add flavoring—in essence, create one’s own soft drink.  The company previously operated in Ma’ale Adumim, where it employed Palestinian workers. However, boycotts against the company (because it was located in disputed territory) prompted it to move operations to a Negev community in undisputed Israeli territory.  In the process, many Palestinian workers lost their jobs, prompting questions about what the BDS campaign against Israel really had accomplished.

Howard Dyckman, president of ZOA’s San Diego chapter, said offering free sodas and ice cream floats with an Israeli product was a good way to introduce festival goers to the ZOA. The organization was founded in 1897 and was a staunch supporter of the Yishuv in British Mandatory Palestine, 50 years before the historic United Nations vote to create the Jewish State.

Chabad emissaries stationed themselves throughout the Festival grounds, offering men over the age of bar mitzvah the opportunity to put on tefillin and recite a blessing. Chabad’s operating philosophy is that if a person performs one mitzvah, he soon will be motivated to perform another and another. Rabbi Mendy Goldstein of Chabad of Poway recited the blessing over the tefillin with me; Rabbi Yisroel Dinerman of the Chabad Hebrew Academy prayed with Shor.

The Festival was held on the grounds of what today is known as Liberty Station, and before that was the Naval Training Center.  However, a Jewish connection goes back to an even earlier period in San Diego history.  Liberty Station is located in the Roseville section of the Point Loma community. Roseville was laid out and developed by Louis Rose, who came to San Diego in 1850 and was its first Jewish settler and entrepreneur. There is a monument honoring Rose on Liberty Station at a point where the Womble Street parking lot meets the running path alongside the Boat Channel.

Today Liberty Station, accessed from Rosecrans Street, is a mixed residential, commercial, and historical community, which some liken to a second Balboa Park.  It is the home of several museums—including the New Americans Museum, dedicated to telling the story of West Coast immigration—as well as dance companies, restaurants, and various artistic endeavors.

This was the first time that the Jewish Federation of San Diego County has chosen to hold the festival at Liberty Station, where temporary fencing was erected to maintain security for festival goers. In the past, the festival has been held at such venues as the Lawrence Family Jewish Community Center, the San Diego Jewish Academy, and the athletic area along Nobel Drive.