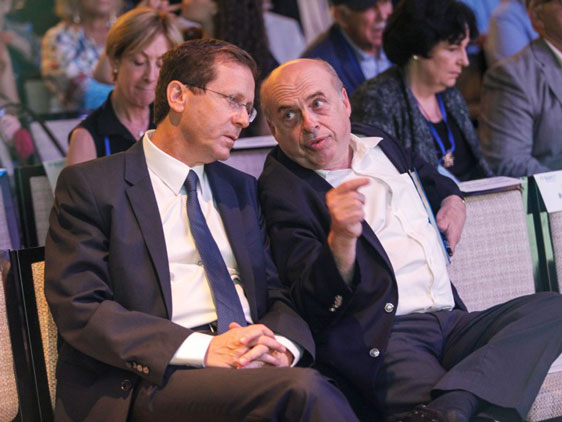 JERUSALEM, ISRAEL –  The Board of Governors of The Jewish Agency for Israel has unanimously elected Member of Knesset Isaac Herzog to succeed Natan Sharansky as Chairman of the Jewish Agency Executive. The vote by Jewish leaders from around the world took place … at the opening plenary of the Board’s June meetings in Jerusalem. In electing MK Herzog, the Board accepted the recommendation of the Leadership Nominating Committee, composed of the leaders of The Jewish Agency’s constituent organizations – the Jewish Federations of North America, Keren Hayesod-UIA, and the World Zionist Organization. Chairman-elect Herzog addressed the gathering shortly after his election and was congratulated by outgoing Chairman of the Executive Natan Sharansky and Chairman of the Board of Governors Michael Siegal. Chairman Sharansky will conclude his tenure at the organization’s helm during the course of this week’s Board meetings. Chairman-elect Herzog will step down from the Knesset in the coming weeks and will enter office on August 1st.

Chairman of the Board of Governors Michael Siegal said: “I’d like to thank Natan for his nine years of outstanding leadership and direction and hope, and [I] am confident that Isaac Herzog will lead The Jewish Agency in the same honorable and compassionate fashion as Natan Sharansky.”

Outgoing Chairman of the Executive Natan Sharansky said: “We are the only organization whose leadership includes representatives of both the coalition and the opposition, of Orthodox, Conservative, and Reform Jewry, and of Jewish communities around the world. We are the independent voice of the Jewish people and, at the same time, our main partner is the government of Israel. It is essential that we preserve both our independence and our partnership, and I wish you much success in that crucial endeavor.”

Chairman-Elect of the Executive Isaac Herzog said: “A Jew is a Jew is a Jew, no matter his denomination or the type of kippah he chooses to wear or not to wear on his head. I promise to work hard to promote Jewish unity and to partner with the Prime Minister and the government to achieve this crucial goal.”