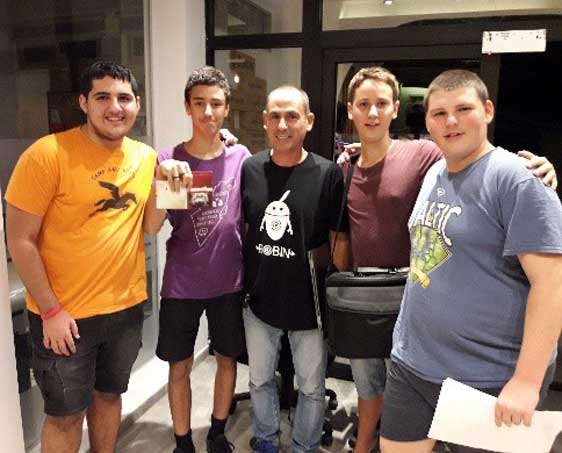 SouthUp is a partnership between community and business leaders from San Diego and Sha’ar HaNegev to help create a larger entrepreneurial climate and ecosystem in the region, to make Sha’ar HaNegev a recognized startup community, and to promote economic growth within the region.

On September 5, 2018, SouthUp held its second conference at the new Innovation Center at Kibbutz Nir-Am. Following up on the first SouthUp conference in June, the goals of this second conference were to expose the activities of SouthUp to kibbutzim all over Israel, and spread the word of innovation and education to the whole country.

A start-up exhibition was held at the beginning of the conference that included 20 start-ups from various fields, including Agritech, IoT, Industry 4.0, Digital Health, Robotics, and Cleantech & Co.

Aside from the SouthUp companies and companies that are being accepted to the Technological Incubator, two special groups were hosted. The first group, students from the Sha'ar HaNegev High School, set up their first start-up named "School Coin," which uses blockchain technology to replace students as private tutors with discounts at the school cafeteria.

The second start-up was presented by Sapir College students enrolled in the entrepreneurial program. They presented four projects: electric street-cleaning bicycles, a weight-loss patent for military expeditions, a request for cakes made on demand, and rental of equipment for the self-employed.

At the conclusion of the exhibition, a ceremony was held with greetings and speeches for the Grand Opening of the second facility of the Innovation Center, located at Kibbutz Nir-Am.

Four lectures were also held about how and why kibbutzim should invest in innovation in general, and in start-ups, in particular. Between the various lectures, a different start-up company came up and presented their project to the audience.

All in all, the conference was a great success. Our friends and guests were very pleased with the content and the presentations at the event. As one entrepreneur, Nir Hazan, shared: “The conference was very good.  It was well organized, we met very interesting people, and we hope that we will develop through it.”