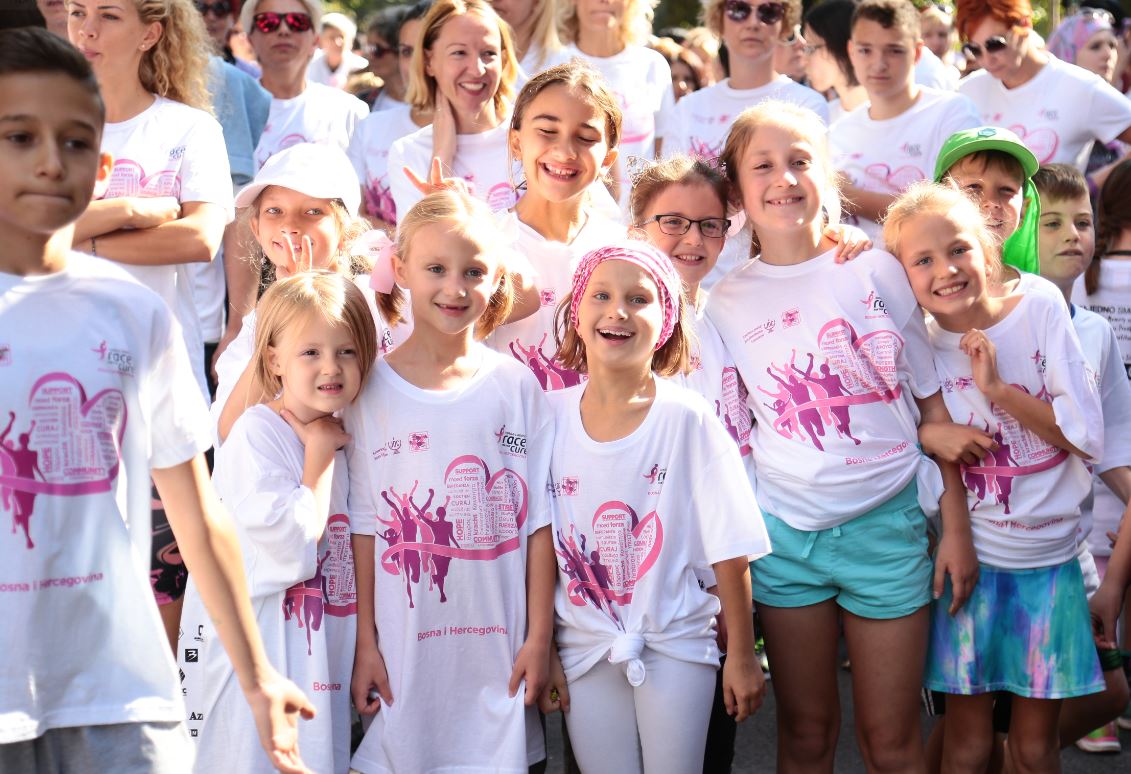 As millions of people around the world marked World Cancer Day on February 4, Itai Shamir, Program Director of  JDC’s Women’s Health Empowerment Program focusing on breast cancer education and early detection – recalls the power of community when thousands of women in Sarajevo gathered in October for the annual Race for the Cure, part of JDC’s partnership with Susan G. Komen.

If you had told me 9 years ago that I would be sprinting in a park in Sarajevo to raise awareness about breast cancer, I would have thought you were delusional. At that time, I didn’t know much about breast cancer, the leading cancer among women. Truthfully, I barely knew how to pronounce Bosnia and Herzegovina and I am not sure I would have been able to locate it on a map.

I inherited JDC’s Women's Health Empowerment Program (WHEP), operating in Bosnia and Herzegovina, Hungary and Israel and the Palestinian territories, during a professional transition and was reassured that my oversight of the program during the summer would end up being a very quiet affair.

Such assurances were just wrong. As soon as I started working on WHEP, I became aware that this program was anything but quiet and was tirelessly fighting breast cancer by educating the public about early detection, providing survivors with leadership opportunities and essential social services, and supplying communities – many of which are in remote locations – with crucial medical services.

It didn’t take long before I learned two crucial lessons:

First, breast cancer is not just a disease that mostly impacts women; it also deeply affects their family and friends. Sadly, because breast cancer touches so many lives, most people have met a breast cancer survivor, know someone braving the battle toward remission, or have lost a loved one to this devastating disease.Sadly, every 19 seconds, somewhere in the world, a woman is diagnosed with breast cancer, and every 60 seconds a woman dies of this disease. This statistic is alarming, and has made breast cancer a global crisis.

Second, I learned that that summer is not nearly as quiet as I was led to believe. During those first few months I spent hours working with our field staff, making preparations for events in October, Breast Cancer Awareness Month. While planning activities in Sarajevo, my colleague Nela Hasic and I brainstormed ideas to reach more people to break the taboo around the disease. We decided to leverage our partnership with Susan G. Komen to organize our first Race for the Cure.

In many ways, it was an unlikely proposition, especially given Bosnia and Herzegovina’s complex political climate.

It is a country divided into two autonomous entities – the Federation of Bosnia and Herzegovina and Republika Srpska, with a third region, the Brčko District, under its own local government – and further divided among three distinct ethnic groups, the Bosniak, Serbs, and Croats. Added to these challenges is the fact that healthcare is delivered by different bodies in each autonomous area and Bosnian women in need of continuous breast cancer screening and treatment often have limited access.

As a result, many women do not receive the medical services they need to fight this curable disease in a timely fashion. This is significant as breast cancer is a leading illness among women in Bosnia and Herzegovina. Every year, more than 1,300 women are diagnosed and nearly 600 women die from the disease.

And yet, in a region rife with ethnic and political tensions, our Race for the Cure has managed to serve as a bridge over many divides.

In fact, this past October, more than 7,000 people — Muslims, Serbs, Croats, Romas, Jews, and others — from more than 40 cities registered for our 9th Race for the Cure and the majority traveled far distances to reach Sarajevo. When we started this journey, there were barely 1,500 registrants and survivors were reluctant to wear pink survivor shirts. This year pink was everywhere, and more than 600 survivors proudly appeared on stage to give breast cancer a face.

Indeed, the people I have met during my journey with WHEP have left long-lasting impressions, especially survivors who have struggled with social isolation and fear. Through the support groups we’ve created, many survivors were empowered to become educators, leaders in their communities, and advocates for early detection and fighting the breast cancer stigma. Their bravery has inspired others, including young adults like Irena Šimunović.

After attending a WHEP educational outreach event led by a survivor and a doctor in her hometown of Mostar, Irena felt compelled to join a team of women who were working to promote breast cancer awareness. Irena started volunteering at events providing free medical services like mammograms. After Irena began working with WHEP, she received the devastating news that her mother, Slavka, had breast cancer.

In a twist of fate, it was Irena who convinced her mother to start regular checkups. While Slavka was in remission for five years due to early detection, she unfortunately passed away this month from breast cancer recurrence.

“I gave you life, but you're saving lives every day,” said Slavka who conveyed this statement to her daughter as she remained committed to volunteering with the WHEP program.

In September, Irena got married and thankfully, Slavka was in attendance. And though her wedding fell on the day of Race registration, she made her friends promise they would register for her and during her wedding she even posed with her Race t-shirt.

That enthusiasm was palpable as I stood on the stage at the end of this year’s Race, looking out at a sea of people, including survivors, in their pink shirts, created a human ribbon. I could not have been prouder and was reminded of the Talmudic ideal that in saving one life here in Bosnia, we are saving countless others.