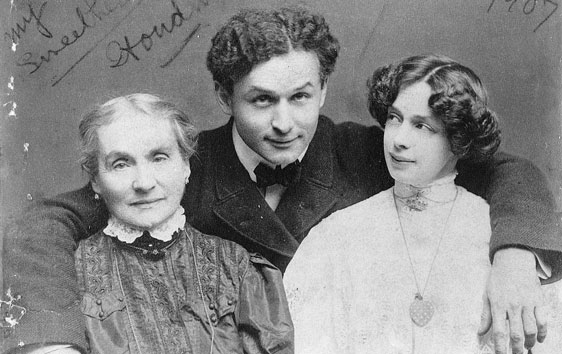 Scrawled on this photo of magician Harry Houdini with his mother Cecilia and wife Bess are the words, ‘My two sweethearts.’ (Library of Congress)

Even decades after his death, famous escape artist Harry Houdini remains one of the world’s most celebrated magicians. Not so remembered, however, is his life before he became –  well, Houdini.

A Hungarian Jew, Houdini was born Erik Weisz in 1874, the son of a rabbi. He and his family immigrated to the United States when he was 4 years old, and arguably his greatest escape was from years of early poverty.

The Jewish Museum of Maryland provides a fuller picture of the magician it calls the first international superstar, through an exhibit [that opened] June 24: “Inescapable: The Life and Legacy of Harry Houdini.”

On display are actual locks and straitjackets he was able to wiggle out of. Other objects are of a more personal nature, such as a Hebrew Bible that belonged to Houdini’s father, Rabbi Mayer Samuel Weisz; and a travel journal the budding magician kept while performing in Maryland in 1898, noting multiple evenings in which he could not afford dinner.

Visitors can try out Houdini’s magic tricks themselves, including making a five-ton elephant disappear (in this case, with a toy elephant). And, in a nod to the séances Houdini’s wife Bess conducted in efforts to communicate with him after his death, visitors can take selfies in which an image of the magician – or his ghost? – mysteriously appears.

The exhibit originated as a result of several appropriately mysterious coincidences.

Last summer, the museum’s executive director Marvin Pinkert was looking to escape the sweltering heat of Baltimore’s annual Artscape festival. He stepped inside a theater where – it just so happened – renowned contemporary magician David London was performing.

Pinkert enjoyed the performance, even getting called up on stage to help London at one point. It stirred up a memory from college, where he had once heard that Houdini was the son of a rabbi.

Several days later, according to London, he received an email from Pinkert about “magic, Judaism, and Houdini.”

“Looking at David London, I thought, if he’s not Jewish, I’ll eat my hat,” said Pinkert.

Pinkert learned that London had discussed Jews and magic in his bar mitzvah speech almost 25 years ago – and performed his first magic trick at age 7, at his cousin’s bar mitzvah, pulling a rabbit out of a hat.

Now, London would work a different kind of magic – as a guest curator of an exhibition on his boyhood idol.

“I had a poster of Houdini in my room as a teenager,” London said. “He was arguably the most famous magician ever to live.”

London drew upon his own background in magic – including being a former editor of a magic magazine – to help acquire historic artifacts for the exhibit.

To London, “the most important artifact in the whole show” is the Bible belonging to Houdini’s father.

From central Europe to the Midwest

Rabbi Weisz was part of the Neolog movement – a denomination of Hungarian Jewry which evolved from the same school of thought as Conservative Judaism. The family left for the United States in 1878 – Erik Weisz’s name was changed to Ehrich Weiss in the process – and they found a new home, and a pulpit for the rabbi in Appleton, Wisconsin.

However, Pinkert said, “after a few years, they dismissed him. The most likely reason is that he was slow to learn English. The congregation wanted an English-speaking rabbi.”

The family slid into poverty; young Weiss ran away from home. Father and son reunited in New York, where both worked in a necktie factory and where Ehrich was bar mitzvahed by Orthodox Rabbi Bernard Drachman. An interest in magic also developed.

“He may have seen some magic show in Appleton,” Pinkert said. “After he ran away from home to New York, to a YMHA in New York City, he did a show under the handle ‘Erik the Great.’”

But Erik the Great would achieve success under a different name.

“There was a person named Jean Eugene Robert-Houdin, a French magician of the 19th century,” Pinkert said. “[Weiss] got this crazy idea that putting an ‘i’ at the end [of ‘Houdin’] sounded French. He acted in [a group called] The Brothers Houdini with a gentleman who was not his brother. It was the beginning of the name Harry Houdini.”

After marrying his wife Bess in 1894, he subsequently dropped his “brother” and performed with her as “The Houdinis.”

“He played that role the rest of his life,” Pinkert said.

Even while promoting himself as the “King of Cards,” success eluded him. While performing in Maryland in 1898, money was scarce for Houdini, as was revealed in his diary.

That year, though, he befriended a fellow Jewish immigrant, Martin Beck of the Orpheum vaudeville circuit, who imparted good advice, according to Pinkert: “You may be the King of Cards, but you’ll have real success if you’re the King of Handcuffs.” This suggestion to opt for escape acts “was clearly a turning point in Houdini’s life,” Pinkert said.

His endeavors grew more audacious, as his return trips to Baltimore proved. He broke out of the city jail in 1905, and escaped a water-torture chamber in 1915. In 1916, he survived being suspended upside-down in a straitjacket from the office of the Baltimore Sun newspaper (the museum is showcasing a similar act on opening day, with a magician doing an escape from a 65-foot crane).

“[Houdini] believed he could be the greatest magician ever,” London said. “He worked tirelessly [in] both halves [of his life] to build his career, reputation, fame. It’s the universal part of the story. Big dreams, determination, hard work.”

Technology also helped; London said that an argument could be made that the 52 years of Houdini’s life witnessed a technological surge unsurpassed in human history, with such inventions as the telephone, radio, automobile, airplane, and film. Houdini was there to make use of it.

“He was at the right time and place,” London said. “He had a desire to always be on the cutting edge. He was incredibly aware of new technologies.”

Museum visitors can see film footage of the magician and hear a rare audio recording of his voice.

When it came to advertising and mass media, “he was a master of self-promotion,” London said. “In every city, he not only did the upside-down straitjacket escape before crowds of people, he did it at the local newspaper building, which guaranteed free publicity.”

Chained to an identity

Even as Houdini rose to success on new developments, he maintained a relationship with his traditional Judaism.

“Later on in life, he still had an attachment,” Pinkert said. “I think it’s interesting that in a memorial to his mother [Cecilia], he writes, ‘Your devoted son, Harry Houdini,’ and in parentheses, ‘Erik Weisz.’ He never really loses the identity of Erik Weisz.”

London cited a letter from Houdini to “a lifetime friend” in Appleton, Wisconsin, in which the magician told of his “relief one year after his mother’s death, when he no longer had to recite the Mourner’s Kaddish prayer nightly.” While it is not known whether he did this on his own accord or out of reverence for his parents, “we discovered he did that 365 days,” London said.

London added, however, that diary entries and anecdotes indicate incidents in which others made anti-Semitic statements and Houdini kept quiet. He similarly downplayed his Judaism when he performed in Russia shortly after the infamous Kishinev pogrom of 1903.

“At that period, it was not permitted for Jews to stay overnight in Moscow,” Pinkert said. “He played it down. Harry was deeply affected. It was two weeks after the Kishinev pogrom. He was clearly aware what was happening around him.”

As his fame grew, he became more comfortable with his Judaism. During World War I, he formed the Rabbis’ Sons Theatrical Benevolent Association, which included Jewish-American stars and Houdini as president, Al Jolson as vice president, and Irving Berlin as secretary. The organization raised funds for Hebrew associations helping military families, as well as for the Red Cross.

“He was driven to create a public organization [that showed he was] not only Jewish, he was the son of a rabbi,” London said. “His attitude was evolving throughout his life.”

Houdini’s life came to a mysterious end in 1926.

Pinkert said that “the story of his own demise” is that he was punched in the stomach in Montreal, but continued working the next four days. Then, he fatally collapsed on stage – on Halloween.

“All sorts of mythologies developed on how he died,” Pinkert said.

Many have wondered whether the magician who escaped so much in life could do the same with death.

“If anybody was able to escape death, he would be the one,” London said, adding that Houdini and his wife, Bess, had “a secret code” by which he planned to reach her from the hereafter.

“She held séances for 10 years,” London said. “They were unsuccessful.”

In another tragic postscript to their marriage, religious differences (his wife was Catholic) kept them from being buried together. Harry Houdini is buried at Machpelah Cemetery in New York; Bess Houdini, who died in 1943, is buried 25 miles north, at Gate of Heaven Cemetery.

Séances to connect with Houdini are “held to this day,” Pinkert said.

But, he added, “To the best of my knowledge, nobody has ever actually spoken to Houdini after his death.”

By Rich Tenorio, Times of Israel